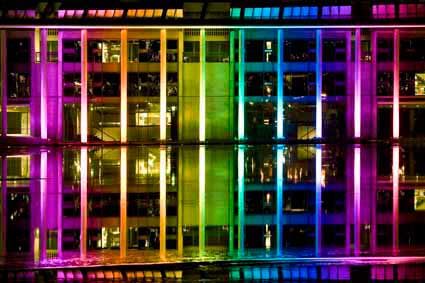 As an artist, Bill FitzGibbons has an international reputation for his light installations using computer-programmed, architectural LEDs. Recently, he created a dramatic light installation in Iceland on the colonnade of the Reykjavik City Hall as part of the city’s Museum Night. 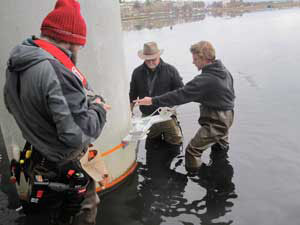 As an arts administrator, FitzGibbons oversees the Blue Star Contemporary Art Center, which is celebrating its 25th anniversary with “Amalgamations 25: 25 Artists for 25 Great Years” as part of San Antonio’s Contemporary Art Month. (For images of the Rebirth of CAM, look here. )

CAM has moved to March to coincide with Luminaria, a one-night art festival on March 13 that is modeled on events such as Reykjavik’s Museum Night. For the first Luminaria three years ago, FitzGibbons lit up the Alamo with shifting, brightly colored LED lights, which served as the backdrop for a memorable performance by the San Antonio Symphony.

“The Blue Star is probably stronger than ever, and I think we are presenting some of the best exhibits the city has to offer,” FitzGibbons said. “But I’m hoping that as part of our 25th year, we can begin to start thinking more internationally, with more artist exchange programs.” 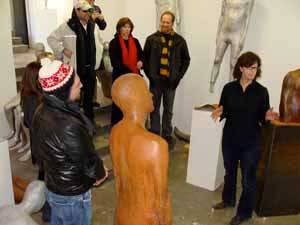 As a curator, FitzGibbons invited Iceland sculptor Steinunn Thorarinsdottir to show her cast-iron figures two years ago at the San Antonio Botanical Garden as part of “Art in the Garden.”   This led to the invitation for FitzGibbons to light up Reykjavik’s City Hall, and besides a couple of helpers, he took along a contingent of Blue Star supporters.

A procession of torchbearers and musicians around a lake adjacent to the city hall opened “Ondvegissulur, Poem of Light.” FitzGibbons collaborated with countertenor Sverrir Gudjonsson, who composed a soundscape to accompany the computer-programmed dance of the LED lights.
According to legend, Reykjavik was founded by a Norwegian Viking chieftain, who had his men launch two pillars from his ship, and said that where they landed, he would establish his new home, FitzGibbons said. 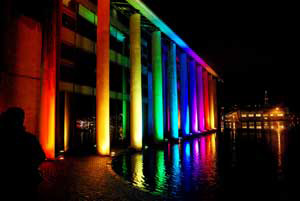 “It took months for the timbers to be found, but they were caught in the bay at Reykjavik, which means ‘smoking bay,’ ” FitzGibbons said. “The City Hall’s columns seem to rise up from the water, so it seemed like a perfect fit. Gundjonsson’s soundtrack began with the sound of the ocean and a choir performed. He read a poem that mentioned Doomsday, and I projected a fire effect on the columns. At the end, I used the colors of Iceland’s flag, and everyone sang the national anthem.”

The light show continued all night, and the next day, two Iceland newspapers ran pictures on their front pages of the “Poem of Light.”

San Antonio sculptor George Schroeder is set to be the first artist in an exchange program between the Blue Star and Reykjavik, FitzGibbons said. He’s also working on an exchange with Dresden. And he’s done light projects in Helsinki and Stockholm.

In Texas, FitzGibbons’ major public art projects include the “Skywall” at the Houston’s Bush International airport. His computer-controlled lights under two underpasses on the east side of San Antonio’s downtown are called “Light Channels,” which successfully turned the previously dark and menacing underpasses into a tourist attraction while making the area much more appealing to pedestrians as a gateway to the city’s historically black East Side.

“As an artist, I bring something special to it through the computer programming and the play of the light,” FitzGibbons said. “And matching the lights to the rhythms of music in these temporary site-specific artworks requires some creativity as well. I hope to continue my architectural interventions with important buildings worldwide.”

The Blue Star prides itself on being an artist-run institution, and FitzGibbons proves that being a capable administrator and a visionary artist isn’t incompatible. He also serves on the board of the International Sculpture Center, and is working on public art commissions in Seattle and Cleveland. 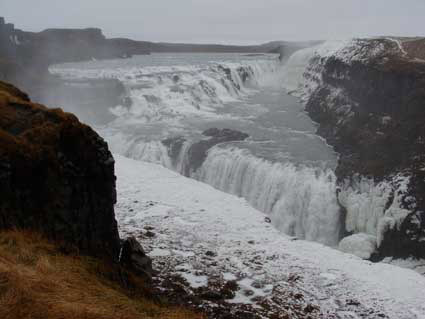