Nick Brown strikes a balance. The Los Angeles-based artist’s second solo exhibition at Tiny Park in Austin embodies an extraordinary push-pull between figuration and abstraction, vibrant color and inky black, the lightest brushstrokes and tectonic slogs of unctuous oil paint. This is tied intrinsically to Brown’s continued investigation into cycles of life and death. Southern California tide pools are setting and subject of Still Life: Nocturne, extending an additional layer to this meeting of opposites—for what is “still” within these organic rocky habitats? 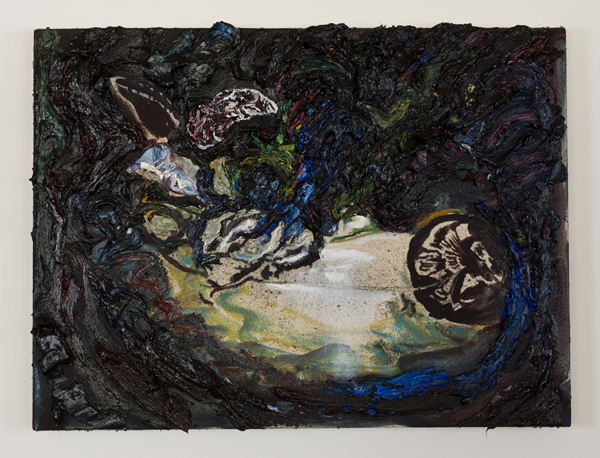 Brown engages the term in describing his work process: “in the darkness [tide pools] are terrifically alien and somehow busy at some secret task. In order to capture this I camped at the beach, waded out into the darkness and photographed the setting using just my headlamp as a light source. This provided a spot lit effect adding to the drama. I found to make the images work I had to crouch down and shoot on their plane rather than from above. This is what makes the images read as a still life rather than a figure in landscape. I really liked how these paintings forced one genre into another.” 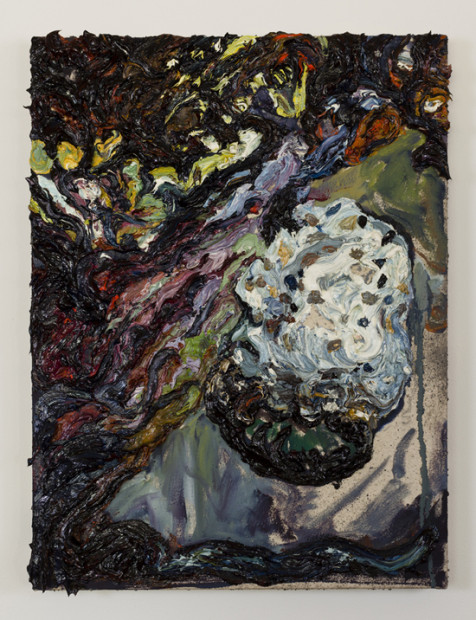 In John Steinbeck’s marine travelogue The Log from the Sea of Cortez, he writes, “It is advisable to look from the tide pool to the stars and then back to the tide pool again.” Brown underlines that distinction in some of his titling—Lunar Form at its most obvious, but New Forms and Primitives as well. The former seems to catch the moon in reflection against a sinewy flow of reddish/greenish/violet-ish kelp impasto. It’s one of the immediately brightest of these dozen smallish-scale canvases, but even New Forms across the room, accented by blue-green sea flowers and almost feminine curves, ignites up close, its heaviness diminished when approached.

The two big c’s are warranted here: crepuscular and chiaroscuro—multi-syllable beauties that further accent Still Life: Nocturne‘s harmony. These paintings originated after twilight, their subjects active under the cloak of nightfall, and that darkness permeates the show. Yet, Brown’s treatment of deep blacks with color, matching them against brushy, lightly stained sections, cause the canvases to glow. Brown admits, “There is actually no black in any of these paintings. They are all mixed colour. This provides a richness to the darkness and allows other colours to filter through them and reveal some other colour and value.” The royal blue backgrounding New Forms‘ black had me seeing vivid silhouettes, while vegetal greens across Sandman on a nearby wall resembled wildfire as much as flowing seaweed. 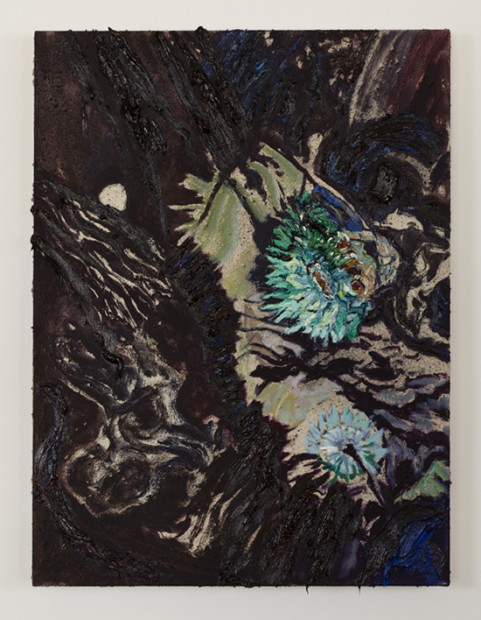 He continues, “Again, the blackness serves a purpose. It is the tide, night, a force. It provides a narrative and can be the antagonist. It is the oppressor, doing the covering up. Alternating or commingling the blacks with violet and deep reds serves many purposes. It gives more dimension through colour and value. It implies a sense of rendering, some vegetation in the darkness. It also adds a more visceral feel, sometimes feeling bloody or internal.” Brown highlighted The Wall in his contrasting treatment of thick and fluidic paint. The miasma of not-quite-blacks encroaching upon vulnerable fauna resembles sludgy crude oil—a reminder of the 2010 BP spill and too many others in the Gulf of Mexico and elsewhere. 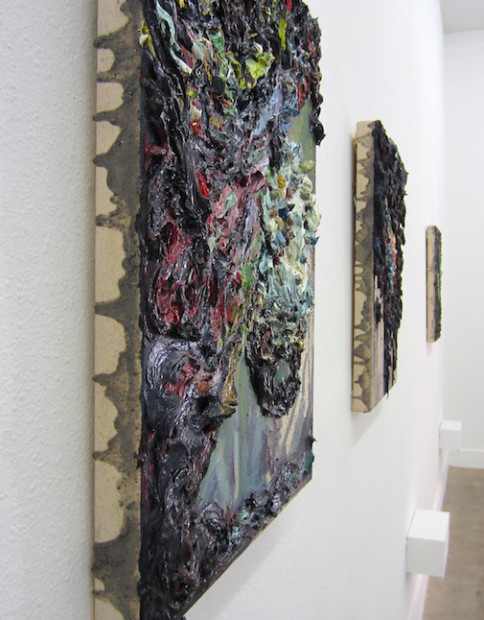 Life and death, a natural (and sometimes manmade) flow, captured in a single composition. Sixteenth and 17th-century Flemish vanitas paintings—arrangements incorporating a skull or rotting fruit for musing upon the transience of existence—are an integral chapter of still lifes. In more recent terms, I’d eschew the more blatant usage of skulls and decay (see: Damien Hirst) for Audrey Flack’s photorealistic ennui (even the kitschier stuff). As well, Nick Brown belongs in the contemporary canon of naturalistic vanitas. Returning to our discussion of color and technique in Still Life: Nocturne, Brown said, “the whole environment is so lush. The vegetation is heavy and thick, the creatures appear practically made of paint. Everything is dripping, scintillating, the sand sucks your feet under. I wanted to capture this lusciousness that is beautiful and grotesque. I liked the challenge of painting really thick paintings on a small scale while retaining rendering. The colour in a tide pool is just amazing….Nature is a great guide for colour. People use colour wheels and all this scientific nonsense. Painting is not science, it’s alchemy. Look around, the answers are all there.”

One final note: a soundtrack accompanies Still Life: Nocturne, composed and recorded by Los Angeles duo Cardoo specifically for this suite of paintings. As Aniela Marie Perry’s resonating cello and Marisa DeMeglio’s echoing guitar chords waft from the gallery speakers, I believe their temporal input to Brown’s static images continues this life/death cycle so prescient in his work. Plus, if the ostensibly gloomy, muscular mini-AbEx renderings keep you at a distance, Cardoo’s music may act as catalyst for a lingered, up-close look at these lively compositions. 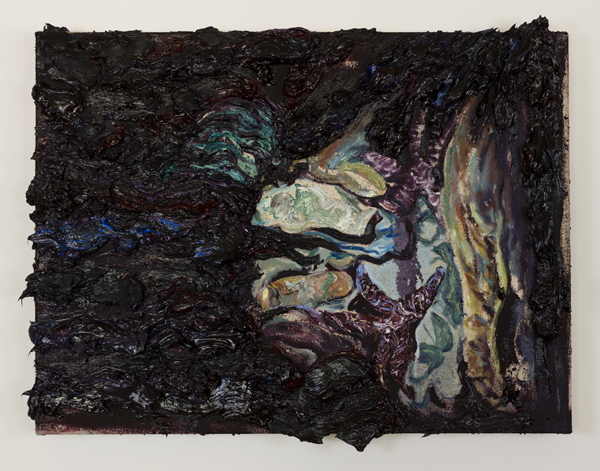 Still Life: Nocturne at Tiny Park continues through November 30 and is open for viewing 12-5 pm Saturdays and by appointment.

iam lost in this digital world,would like to know if my entry titled …eve…has been received. is there a conformation number..who can help me…