As has already been reported, Austin’s Tiny Park is closing its doors at its current venue at the end of April. As if to reflect the cyclical nature of curatorial endeavors, the gallery is ending its run on Navasota Street with the exhibition of the artist featured in its inaugural show in 2011—UT alumnus, Miguel Aragón.

Born and raised in Ciudad Juárez, Mexico, Aragón has garnished acclaim for his investigation of the images of violence in his native city. Two large, black-and-white, hand-drilled portraits from the series exhibited in Fractured Memories, Assembled Trauma at Mexic-Arte Museum in 2012 form the core of the show at Tiny Park. Facing each other on two opposite walls, these monumental pieces set the tone for the gallery. Six new abstract collages, slightly larger than a standard letter-size page, complete the exhibit. The process of producing images through erasure—drilling and cutting—ties these two bodies of work together, but I wonder if the shift in content reflects Aragón’s physical move away from the US –Mexico border to the East Coast. 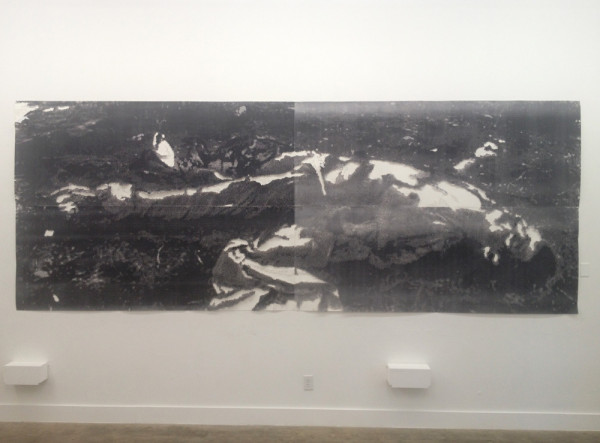 Aragón’s hand-drilled portraits are based on media images depicting the gory fallout of the drug wars in Juárez. The artist’s process functions as an analogy to physical violence. The drill ripping through the Xerox blow-ups of press photographs and white backing paper is a metaphorical equivalent of a bullet tearing through the human flesh. The holes left by the drill serve as counterparts of the half-tone pattern that translates a photograph into a printed image. The white backing sheet behind each image creates an illusion of bullet holes in the actual gallery wall. 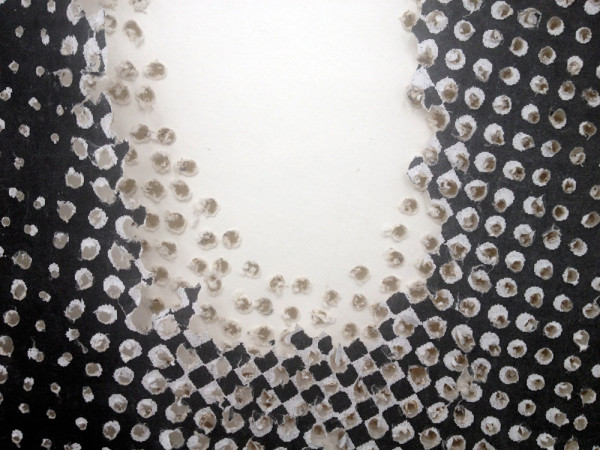 The term “portraits” is hardly applicable here.  Grainy, extremely enlarged images, mutilated by the drill, function rather as grotesque, monstrous generalizations of individuals: types rather than actual people. In De brazos abiertos, the corpse with wide-open arms lies face-up on what appears to be a mixture of grass and dirt. In La matanza del Centro Aliviane, the image focuses on the upper body of an elderly woman clutching a purse, who turns her head away from the viewers (and a fallen man in the image behind them) and covers her eyes. Her gesture suggests the unbearable sight of violence, implied both by the image across the gallery space and by the work’s title, which references the mass killing of eighteen young people in a rehab clinic. 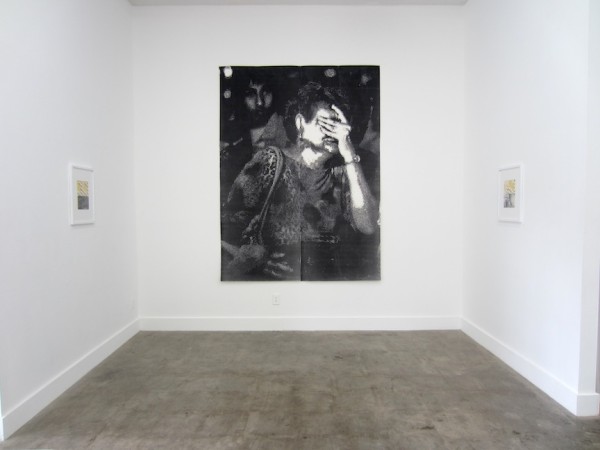 If, for the silent protagonist of La matanza del Centro Aliviane, violence is repulsive, I doubt Aragón’s viewers turn their heads away from his work (at least, I haven’t).  As with a whole, by now established, sub-genre of Mexico-violence art, Aragón’s hand-drilled portraits shove the violence straight into my face. Without a doubt, the first lady of this genre is Teresa Margolles, Mexican artist some twenty years older than Aragón, who often operates with much more restrained visual idiom, inherited from Minimalism and conceptualism, but with much more literal material (such as the water used to wash dead bodies in Mexican morgues). Inherently ambivalent, this type of work as much denounces the violence as it stereotypes Mexico as the essentially violent zone, very much along the lines of Fox News. Though some projects of the genre are certainly much better—that is, more thoughtful and affective—than others, the interpretation really depends on the sympathies of the viewer.

The fact that Aragón is trained as a printmaker is his saving grace. Analyzing his hand-drilled portraits within the medium-specific tradition allows for much more earnest reading. Historically, from Jacques Callot’s seventeenth-century renditions of the Thirty Years’ War and Goya’s nineteenth-century registers of the Peninsular War, easy-to-disseminate prints served to register the miseries, misfortunes, and disasters of violent conflicts, very much against the heroic conventions and traditions of official history painting. Thus, I “buy” Aragón’s works if I see the drill as yet another tool for producing multiples: not incising a matrix that, in the end, will produce multiple copies of the image, but physically and immediately piercing across the stacks of paper sheets. In this case, the drill is not a conceptual, but a practical and expressive device. 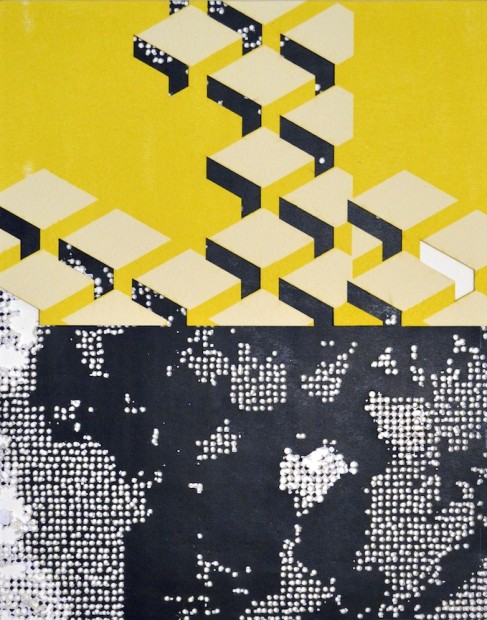 Aragón’s untitled collages mark a substantial turn for the artist, even though they are made through similar processes. If his large-scale figurative works maintain the sense of rawness and directness, the small-scale abstractions show high level of formal sophistication and calculation. The collages are assembled from two or three layers of contrasting paper sheets. Their upper portions feature subtle rhomboid pattern on a warm yellowish background, in which cutout negative spaces turn the flat rhombuses into perspectival cubes. These geometric sections overlay what appears as gestural monotypes, the inked-up backs of printing plates, or erased and/or drilled Xerox copies, in which the dense, uniform dot pattern asserts the flatness of the picture plane. The sharp, hard lines of the cutout forms contrast with soft scratch marks and the torn edges of the drilled holes. The mustard yellow is just a few tones away from the creaminess of the paper, which is enhanced by the cool white in the Xerox sheets. In short, within their small fields, these collages condense an incredibly rich variety of pictorial traits. 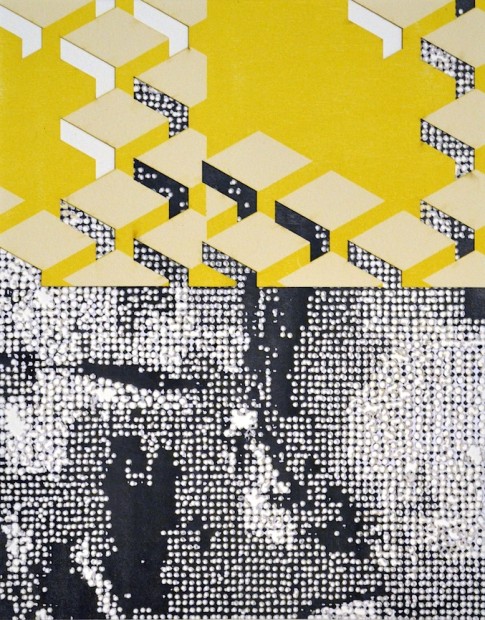 As elegant as these works are, I cannot read what they might mean for Aragón. Perhaps they are just dutiful exercises in picture making. If the artist continues to pursue the themes of violence in Mexico, I am curious to see how a more formalist approach might affect such new works. And, then, I wonder: can these modest collages conceivably hint at the end to violence?

Photos courtesy of the artist and Tiny Park.

Miguel Aragón New Works continues at Tiny Park (1101 Navasota St., Suite 2, Austin, TX) through April 26. It is available for viewing 12pm–5pm on Saturdays and by appointment.