That is Not Okay! Vandals Smash Austin Gallery Window 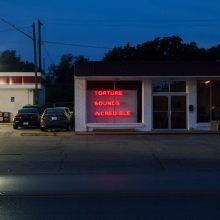 At some point Monday night/Tuesday morning, someone threw a large cinderblock through the front window of the Okay Mountain gallery space in Austin. Although the cinderblock crashed through the window and hit the wall right next to the artwork on display, it did not damage the actual work, a neon installation by Chicago-based artists Joel Ross and Jason Creps. “But it was obvious,” says Tiny Park gallery Director Brian Willey, “that was the intended target.”

Although Ross and Creps often place their text-based works in off-beat locations knowing that they could be stolen, vandalized, or simply tossed out by a city clean-up crew, their current exhibition at Tiny Park gallery in Austin has only documentary photographs of these sorts of adventures. The show also includes some sculptural “signs-objects” installations and some preparatory drawings.

The one piece that was shown outside of Tiny Park was not out in some abandoned lot or on public property, but in a window display within the gallery space of their friends and neighbors at Okay Mountain. Now Willey is busy trying to get his neighbor’s very large window replaced, not just for the protection of the artwork, which is now safely covered, but because the Okay Mountain building also houses several studio spaces now left unsecured.

Willey admits that the work is “a little provocative” and that they had discussed possible difficulties before the installation, but no one foresaw this outcome. “I wish they would’ve just left a nasty note on the door.” The text of the piece, which reads “Torture Sounds Incredible,” is discomforting but, after a second or third reading, becomes incredibly ambiguous. If it was the content of the text that incited the vandal, it is difficult to predict which reading was the motivation for the violence.

How to Cure World Blindness: An Interview with...

I’m pretty sure it was thrown by a violent asshole.

In art meant to provoke, the response is part and parcel of the work.

Whether it’s ok or not is beside the point. Outcomes unforeseen is what anyone does this for.

It also got some press for the otherwise not reported art event. I have been researching some rumors on who did this.

Pretty good press for these guys…probably cancels the cost of the window.

I’m guessing that Okay Mountain and Tiny Park would prefer not to have had a cider block thrown through a window at the Joel Ross piece, regardless of the extra press attention it might have given them.

Hi Owen – I run Tiny Park. This was not a publicity stunt. Some asshole threw a cinder block through our friends’ window, and it cost me $750 to replace. If you have names of rumored perpetrators, I’d love for you to share that info with me. As Robert Boyd mentions, the exhibition had already received several reviews. We didn’t need this press.

@Robert Boyd
this blog put out a call to find who did this http://austinfront.blogspot.com/
It would be nice if they could find who did this. and why. The art community in austin is small. I wrote the piece.

Hi Brian- currently looking for leads. I put out a call on this blog http://austinfront.blogspot.com/ It’s starting to sound like some drunk upset with torture did this. I have looked at police reports on that area, to see if any drunks got popped. No luck. But it will pop up. Did anyone at the opening seem to be acting weird or a little to drunk?
It would be nice if they could find who did this. and why. The art community in austin is small.

Owen – aside from the cinder block thrower, no one has expressed to us any hostility about the sign. So we have no idea who did it or why.