The Art of the Blind: Return to Earth at the Nasher

Three years after I stopped making sculpture, I’m standing inches from Lucio Fontana’s Spatial Concept, Nature, a hefty, ovoid slab of painted (and slashed) terra cotta. And I’m struck by a discovery: almost out of sight behind one sliced edge is the unmistakable handprint of the artist.

Actually, “handprint” doesn’t quite convey the violence in it. There’d been a fight, and here was the evidence: Fontana’s fingers digging deep into the clay as he wrestled it into submission.

Now in the downstairs gallery of the Nasher, the artist’s presence is palpable. I feel that grip in my gut, a vicarious, albeit posthumous, grasp of clay, far more powerfully than I see it. Had curator Jed Morse not been standing there, I think I would have thrust my own hand into the wound.

If you would understand the fight, or have some inkling of what it meant for these five to attack with such fervor a medium still mired in craft, you’d need to approach Return to Earth as they approached the clay itself: eyes shut to its perceived caste in life, a predetermination based on millennia of utility and decoration. To these five, in their time, clay was fallow ground, just waiting to get all plowed up. As Joan Miró said, “It is time to strike a blow.” 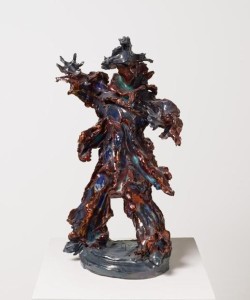 Fontana’s approach to clay would indeed come to blows. Even as he was composing the “White Manifesto” that defined Spatialism, experimentation carried him from the semi-abstracted, frozen splashes of his earlier, figurative sculpture to the fully abstracted work for which he’s now known: the violated canvases and ceramics of the Spatial Concept series.

But we might have seen it coming. Almost ten years prior, sounding downright Newmanesque, he’d written, “I detest the lacy designs and dainty nuances. I loathe the mystification of technique, the amazing technical achievement of Sevres or Copenhagen [that] satisfies the taste of the upper classes and collectors. They are thrilled by the fragility and delicacy of the ware. I am looking for something different…. People call my ceramics primeval. The material looked as if it had been hit by an earthquake…”

Like Fontana, long-time friend and collaborator Fausto Melotti approached the clay in a way more visceral than visual. Together they shook off World War II, and Italy’s Fascism to boot, and joined yet another art movement, this one fueled by the collapse of the totalitarian regime and articulated by the sculptor Arturo Martini when he called for this “art of the blind,” saying, “A true sculptor can make sculpture simply by squeezing the clay between his hands…let us no longer confuse the real life of sculpture with the apparent life of a statue.”

But Melotti engaged with more finesse; where Fontana explodes or implodes, Melotti seduces with humor or pathos. You feel the clay nonetheless, if only in the contrast between rough slabs and delicate, evocative detail. Consider the touching Cat Dog. 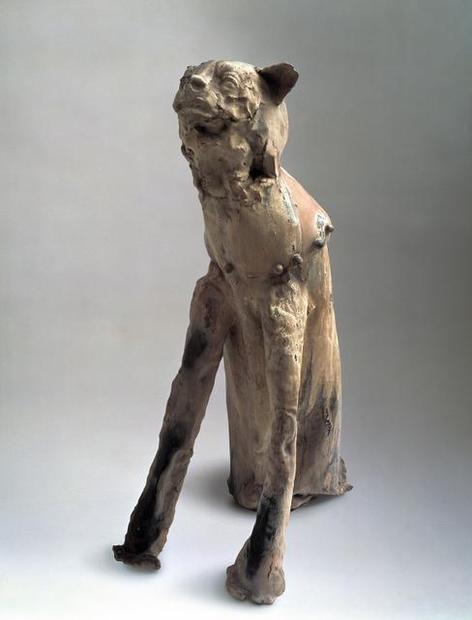 In his essay on Joan Miró for the exhibition catalog, Jed Morse excerpts a 1951 radio interview with French critic Georges Charbonnier, allowing the artist himself to explain ceramic’s appeal “as a medium, its essential link to nature, and its role in his sculpture making.”

Miró: When I’m living in the country, I never think about painting anymore. It’s sculpture that interests me. For example: it rains, the ground gets wet, I pick up some mud; it becomes a little statuette…Painting is more intellectual. It’s for the city.

Charbonnier: You sculpt, you shape. I’m repeating your terms. You never use the word carve.

Miró: No, because it’s less direct, more cerebral. If I shape a bit of potter’s clay, I begin with my thumb; it bears the mark of my thumb.

Charbonnier: At this very moment, you are gesturing as you speak.

Miró: A very Latin kind of behavior. The important thing is the sensation of touching the clay. 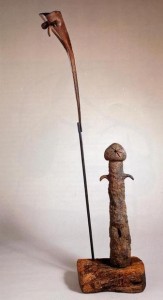 For Miró, sculpture, and specifically clay, symbolized freedom from the easel painting he felt constrained to while on the run from the Spanish Civil War. Especially freeing was the prospect of collaboration with skilled ceramicists, which would keep him from getting bogged down in learning its technical side.

With the possible exception of Picasso’s, such collaborations also helped to make Miró’s work that which exemplifies more than any other in the show an engagement with clay for the sake of clay itself. While the other four artists certainly moved beyond its secondary role as a preparatory tool, their ceramics could have just as easily gone on (and in some cases did go on) to become bronze; I can even imagine many of Picasso’s painted ceramics as painted bronzes. And while the same could be said of much of Miró’s work here, the assemblages, at the very least, could not be homogenized in that way. His clay might convene with wood and steel, but only to represent and remain clay. 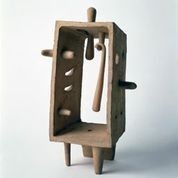 Compared to the other four artists, Isamu Noguchi’s motivations in returning to earth were perhaps more personal, maybe even desperately so. Born the son of a Japanese poet and his American editorial assistant, Noguchi seemed to feel an ambivalence not uncommon among those with biracial or cross-cultural backgrounds and would one day write, “I have no race…. I simply do not belong.”

But this seemed to energize his own approach to clay. After returning to Tokyo in his late twenties, he eventually felt exiled to Kyoto. Once there, rather than make the traditional celadon ware expected from this sojourn, he gravitated to less desirable clay dug from a nearby stream. As if he identified with it. Of that he wrote in his autobiography, “I have since thought of my lonely self-incarceration then, and my close embrace of the earth, as a seeking after identity with some primal matter beyond personalities and possessions. In my work I wanted something irreducible…” 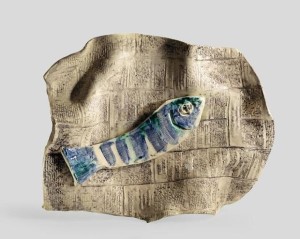 If, judging by these works, the general tendency of the first four artists was to eschew pottery, Pablo Picasso seemed instead to be moving just as intentionally toward it. But writing in the exhibition catalog, Dakin Hart, Senior Curator of The Noguchi Museum in Long Island City, New York, found something about the artist’s general proclivities revealed in that movement: “Picasso’s practice in all media, was always premised on positing and unraveling visual puzzles. The recognition that all it took to transform the belly and neck of the pot he used to create Ceramic Head into a bust was to turn it over, reflects the efficient polysemy that characterizes his formal contribution to ceramics, and to the history of art in general.”

Miró sought something direct; Noguchi, something irreducible; Fontana, something that couldn’t be ignored; and Melotti, something you couldn’t quite put your finger on. Picasso’s interventions, then, prove to fit right in. He may have taken a seat alone at the potter’s bench but, along with the rest, it was all about turning ceramics on its head.

Return to Earth is on view art the Nasher Sculpture Center through January 19, 2014.