by Christina Rees May 14, 2015
FacebookTwitterEmail

While reporting on the record-breaking Christie’s auction sale of Picasso’s “The Women of Algiers” ($179 million), Fox News evidently decided that highly abstracted boobs and crotchal regions of the women depicted in the 60-year-old masterpiece were too indecent for their highly educated viewers. So they blurred them out and also covered them with a title banner.

Way to be Fox News, Fox News. We’d expect nothing less of you, and thank you for contributing to our cultural apocalypse. 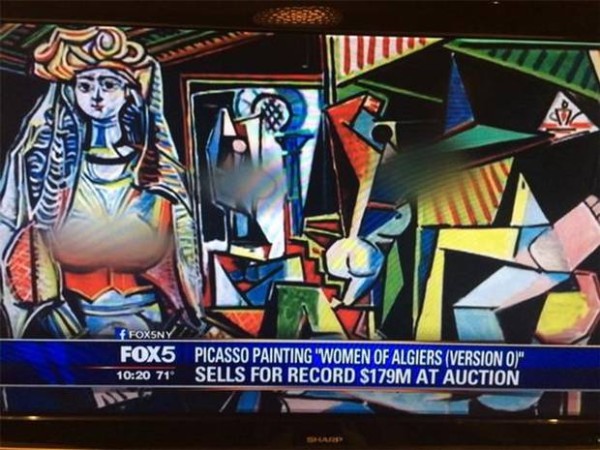 They could have at least used fig leaves.

Wow! I should send them a thank you note – not only does Fox News keep our lives fact free, it also saves us from cubist boobies.

This is a local Fox affiliate – not Fox News. It says it RIGHT THERE ON THE SCREEN, but hey, never let facts get in the way of a good slander, right?

Not sure which is better, the Hieronymus Bosch or the Rothko.

At least they left the butt.