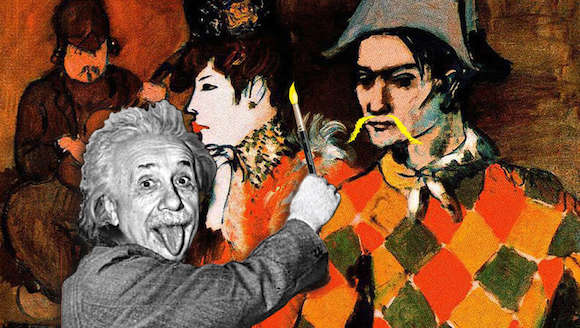 Tomorrow, April 24, the National Geographic Channel will debut its second season of “Genius,” focusing on Pablo Picasso and starring Antonio Banderas. The “Genius” series began with portraying the life of Albert Einstein.

Now, comedian/musician/writer/art collector Steve Martin has written a play entitled Picasso at the Lapin Agile, which imagines the meeting of Picasso and Einstein in Paris of 1904. They were indeed in Paris at the same time, so it could have happened. Billed as a comedy, Houston’s Alley Theater will present the play, which begins May 11 and runs through June 3.

Alley Theatre: All New Director and All New...

maybe the next one in the series can have Jon Hamm playing Forest Bess? or Bryan Cranston playing Robert Rauschenberg?