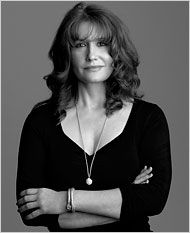 Houston’s DiverseWorks was founded in 1982 by a group of artists who really wanted to make some noise—artistically, socially, and politically. Beginning at the peak of the Reagan era and raising a ruckus throughout the AIDS crisis and the culture wars, DiverseWorks put on some pretty interesting, angry, and influential shows, as is documented in its current exhibition The Eleventh Hour.

In 1989, DiverseWorks brought in artist Karen Finley, who gave a two-evening performance of “We Keep Our Victims Ready,” a confrontational work about the oppressed in contemporary America. This was just before the NEA Four controversy, in which Finley and three other performance artists had their NEA grants revoked due to “indecency.” (In 1993, they won a court case and received the grant money but, in response and under pressure from Congress, the NEA stopped funding individual artists altogether.)

On Wednesday evening, Finley will give a dramatic reading of four selected excerpts from “We Keep Our Victims Ready,” reframed in the context of current social and political issues: war, reproductive rights, freedom of expression, and identity. The reading will be followed by a discussion and Q&A moderated by DiverseWorks Assistant Curator Rachel Cook and UH Visiting Assistant Professor of Art Jessica Santone.

Diverseworks to Give Away Free John Waters Tickets...