Peep Show at Webb Gallery is made up of two segments: one depicts the burlesque theme in photographic prints made from vintage negatives; the other features collaborative art works by Bale Creek Allen and Allison Walton. The principal dynamic is sex. 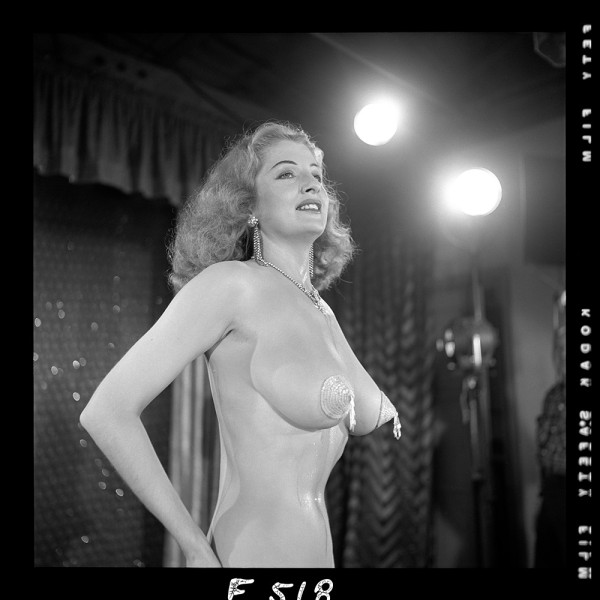 The present tense of the burlesque theme is the subject of much post-modern thinking. By naming the exhibit Peep Show and showing vintage photos, Julie and Bruce Webb, owners of Webb Gallery, telescope our view back to the 1950s and 60s, a very different era for the consideration of the body and self-consciousness. Images of female nudity in the mid-twentieth century had less to do with Girl Power than with concupiscence. 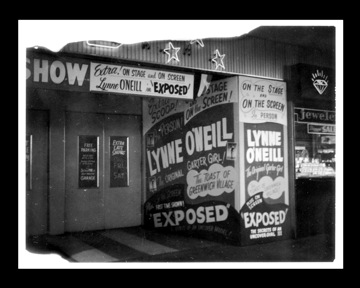 In this photo, the word “exposed” on theater doors plays a double game with visitors. In one sense, it recalls a severe aspect of concupiscence whereby the shame of one stripped bare for public exposure figures the shame of an unrepentant community. Burlesque relies on this sort of sternness as a way to create an exciting sense of trespass. The risk of being caught out or exposed for entering the “unrepentant community” is rewarded with the thrill of defying traditions of moral behavior. The other game of exposure has to do with a sense of revelation—the uncovering of delectable sexual mysteries. One is invited to leave the sensible world for a nightscape of unapproved fun. There, sexual fantasies can be described by a dancer like Tempest Storm. Her glorious breasts, radiant star power, and smile that parlays a rich mood of possibilities are enough to make one wonder, if watching her is wrong, who would want to be right?

Michel Foucault’s landmark sexual analysis, The History of Sexuality: An Introduction, put the idea that social arrangements for the expression of sexuality, such as marriage and even the institution of heterosexuality itself are arrangements of disciplinary power. This power directs sexual expression into approved forms and activities. Only a killjoy would say burlesque lacks expressive power, but the burlesque stage is built to serve the desires of a paying male audience, and is not typically a place for a woman to express her own enthusiastic and/or experimental sexuality. The gestures in burlesque nurse the fantasies of the audience, reinforcing traditional or communal values, in this case a run of shared sexual fantasies. Indeed, many of the vintage images on display in Peep Show fall into approved forms of the traditional “red-blooded American male” of the 1950s and 60s. But there are exceptions. 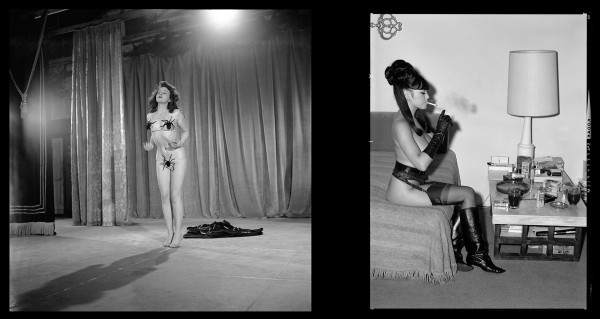 The woman wearing spiders to cover her genitalia and breasts presents a funny, but decidedly otherworldly, fetish. The black boots and black gloves on the woman suggest disciplinary power lies with her. Perhaps she even controls the portions of the Oily Bird lotion there on the night table.

Webb Gallery has strong folk allegiances, and the two best pictures in the burlesque segment show a pronounced folk aesthetic. They do so in the way they locate fecundity in nature, not in theater, as so many of the other pictures do. 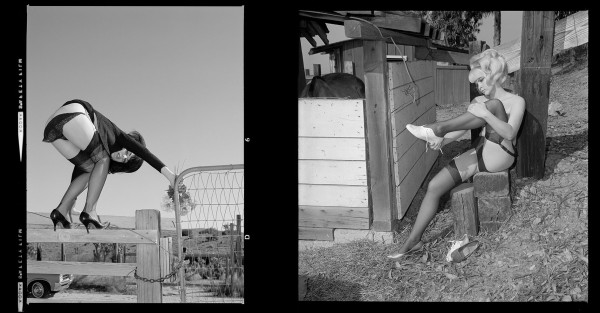 These pictures show spontaneity and outgoing feeling. The photograph on the left combines a “bottoms up” pose familiar to cheesecake photography with a gesture of forthright assertiveness—hopping a country fence in high heels. The woman pictured right shows her strong legs to good advantage. She wears one walking shoe and one regal slipper, perhaps an indication that she divides her time like the great pastoral figure Persephone, who jumped creeks and strolled through sedges in the world of daylight and straddled Hades in bed in the world of night.

Peep Show wouldn’t succeed as it does if it were made up of the burlesque images alone. Burlesque has its fans, historians, and a growing number of practitioners who will find much to wax nostalgic about in these vintage pictures, but the collection only succeeds as art when reflected in the intense psychological mirror of the works by Allen and Walton. A curiosity exhibit becomes very good when vintage images about the fantasy of sex are conjoined with contemporary works about its creatureliness. 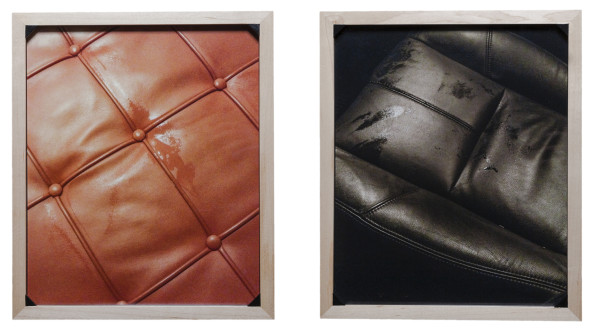 Allen and Walton’s photographs titled Car Seat and Ottoman and the piece titled Hummingbird tell stories of spontaneous sex. The car seat and the ottoman are improvisational surfaces for couples that couldn’t wait for bed. These surfaces show streaks and pools of sexual fluid. Hummingbird is made from a wine stain and illustrates a quick turn in an evening, when a couple can no longer keep their hands off one another and everything in between them gets turned over. 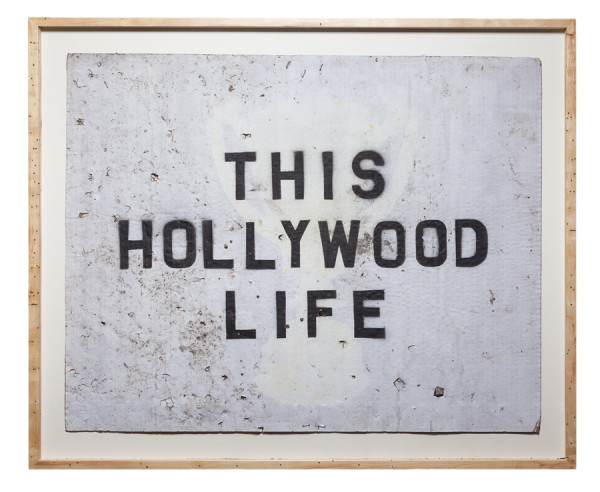 InThis Hollywood Life, what looks like distressed film grain over the slogan is in fact the grit from stones. Stone, often a metaphor for the self because of its seemingly unchangeable nature, is scraped and reduced to suggest a seedy side to a vocation that is built on the illusion of glamour.

For Lovers Only is a wild and witty piece but also one of careful intelligence. The title is written in neon across the handle of an axe. The beauty in neon is the way it haunts. It chases its own afterimage; new hopes are glorified as faded ones are memorialized. Here, the neon glows orange and red, infernal. That blade suggests nasty business for lovers. It alludes to the menace of Henry VIII, Bluebeard, plus all the grim, wild, hacking and attacking stuff of fairy tales and jump rope songs. But I think the piece works as a twenty-first century response to the arrangement of disciplinary power. The axe is a leveling instrument, a tool for progress. Its effectiveness relies on balance and care. It knocks down one structure so that a newer one can be erected, just as sex might start a relationship while tearing down another one. You have to respect it.

That is not an Axe used for For Lovers Only. It is a Splitting Maul. Your interpretation is incorrect. A Maul is NOT used for knocking down structures. It is used for splitting logs along the grain, into manageable pieces, that have already been segmented previously by a saw. If you hit the side of a tree with that tool it would rattle your bones.

Hi Mike, thank you for sighting this a maul and not an axe. Forgive the irresistible: you have a sharp eye. Gallery materials describe the piece “neon on wood axe.” I assume the artists intend the instrument to be read as an axe. Perhaps we’ll hear from them on the matter. In any case, I don’t think the different identity changes what I said at all. To feature a blade and lovers in the same artwork does bring to mind the allusions I wrote about. A splitting instrument does break down one thing to make another thing. And although I never said you had to whack the instrument against a tree as a sort of scheme to hold together the connections I was making, your description of what would happen is apt. Creating a wavering in the bones is another thing that love can do.

With that information I have little doubt that your interpretation is probably the correct one in the context of the artists intention. Its disappointing that the artist was not fully aware of the true nature of the component piece. A double bit or Michigan pattern would have a much greater visual impact and an iconic silouette. He/she should grok their materials. Not to be pedantic, but you did say:” a leveling instrument” and ” It knocks down one structure so that a newer one can be erected”. Mauls are not designed to do either. I’d still hang this on my wall. Love can split you to pieces.

I fear my earlier response does the artists a disservice. The artwork is titled “For Lovers Only.” The name of the instrument itself is not part of the title. Nothing in the art work presents a name for the tool. Mike, I appreciate your interest and enthusiasm for this type of equipment. I regret that my weighing of differences between axe and a maul has caused you to conclude the artists do not understand their materials. I think just the opposite is true. I regret I didn’t investigate further and name the right tool. But I’m glad you would put it on your wall. it is a very interesting piece.

Richard, you used the information i gave you correctly. I apologize to you if that info was incorrect in materials. The idea of axe vs maul is miniscule. The piece is art and we are enjoying it here. You wrote a wonderful piece Richard. Thank you.