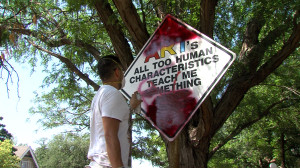 Amarillo artist Jacob Morin has been painting over some of the city’s famous mock road signs, which have been up for many years. According to Amarillo’s NewsChannel10.com, Morin asks permission of the homeowners and landowners and replaces the messages with his own artwork. Some of the owners grant the permission because they are disturbed by the association with billionaire Stanley Marsh 3. Others see the signs as iconic works of work that help to define the character of the city.

Marsh, best known for funding and collaborating with the art group Ant Farm to create the Cadillac Ranch, installed thousands of signs as part of his “Dynamite Museum” project which include texts that are sometimes inspiring, sometimes humorous, and sometimes simply baffling.

Known as an outrageously colorful figure for decades, Marsh once responded to critics with the statement: “Art is a legalized form of insanity, and I do it very well.” In the past few years, though, he has been named as the defendant in a series of lawsuits alleging sexual abuse of underage boys and, in April, was indicted by a Texas grand jury for sexual assault of two teenagers.

Update from Myhighplains.com: “Toad Hall representatives would not comment on the story, saying only that if people want to get rid of the signs in their yards to call them at 359-1014, and they’ll remove them free of charge….. But, they would prefer not having them painted-over. While Stanley Marsh 3 paid for the all the signs, they belong to the property owner and they can do whatever they want with them.”