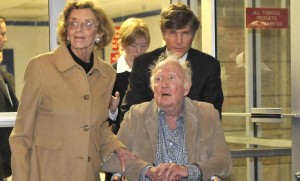 The Amarillo Globe-News reports that eccentric millionaire and accused sex offender Stanley Marsh 3 of Amarillo, along with inner circle, have settled  civil lawsuits by eleven claimants who accused Marsh of paying them for sex acts when they were minors. As part of the settlement, none of the parties  could comment  further on the details of the agreement. An interesting provision of the agreement, from an art standpoint, is the stipulation from all parties that Marsh does not own “Cadillac Ranch,” the iconic pop art landmark by Ant Farm, Marsh’s best known project.

Marsh, free on $300,000 bond, still faces criminal charges: six counts of child sexual abuse and five counts of sexual performance by a child, both felonies punishable by two to 20 years in prison and a fine of up to $10,000 each.

If you’re into that sort of thing, The Globe-News goes on to detail the alleged acts, the evidence, the BMW’s, Viagra, the cash, and the confidentiality agreements, etc, etc. . .