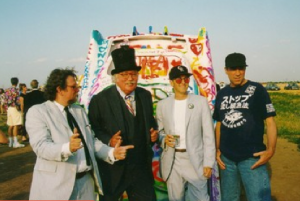 Culturemap reports that Amarillo art patron Stanley Marsh 3 is the target of four lawsuits alleging that the 74 year old collector bought sex acts with a teenage boy in exchange for cash cars and drugs in 2010 and 2011. Marsh, known for sponsoring the Cadillac Ranch outside Amarillo, is alleged to have had “mentoring ” relationships with several young male artists over the years, resulting in charges of indecency with a child in 1996, which were dismissed, and others, which were settled out of court.