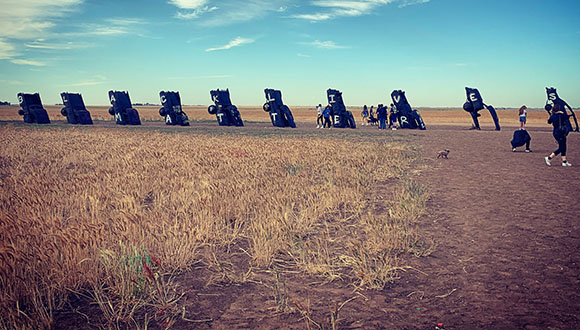 Cadillac Ranch, the iconic 1974 public art sculpture located just off of Interstate 40 in Amarillo, has a fresh coat of black paint with white letters spelling out “Black Lives Matter.” The sculpture, commissioned by Stanley Marsh 3 in collaboration with San Francisco art collective Ant Farm, is a regular tourist destination and graffiti site, and has inches-thick layers of spray paint built up over years. Marsh died in 2014, at the age of 76. According to the Chicago Tribune, ” at the time of his death he was under indictment on more than a dozen counts involving the sexual molestation of children and was to stand trial [later that year].”

After seeing the image on Reddit, we contacted a woman who identified herself as Chelsi O. @chbell08, who organized the painting of the Cadillacs. Her Instagram account states: “Honestly, this is the first time in my LIFE I’ve ever had an idea and goal that somehow came to life and went so beautifully well.” In an email to Glasstire, she further states, “This was arranged in hopes of simply showing support to the black community. I wanted to choose something that would be specific to Amarillo, and Cadillac Ranch is kind of considered a staple of our town.” 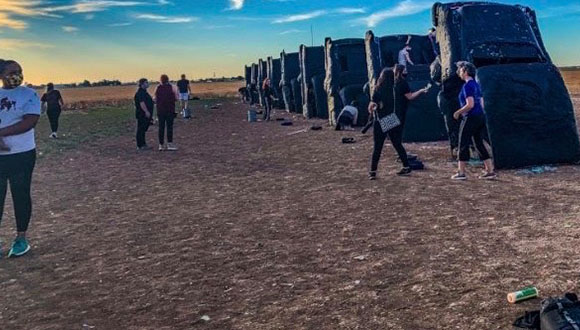 Visitors to Cadillac Ranch usually bring a can or two of spray paint and add names, personal messages and quotes to the thousands that have covered the semi-buried vintage cars.

Occasionally the Cadillacs are cleaned and repaired and repainted with a fresh coat, and the process begins anew. But the newest layer of paint connects the sculpture with protests currently happening across the country and the world. This is also the second large public art intervention to happen in Texas over the past ten days. Between May 30-31, Tony Tasset’s Eye sculpture in Dallas was spray-painted with the words “Now UC US GF.” 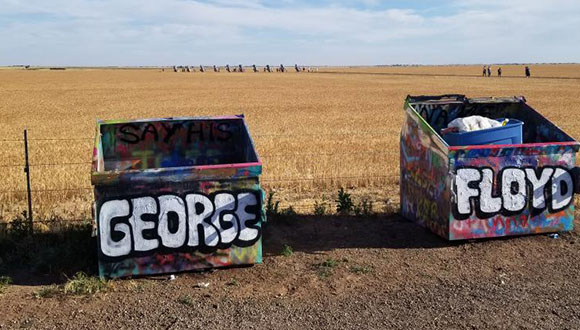 The trash dumpsters at Cadillac Ranch, also popular with graffiti visitors to the site, are painted with Floyd’s name.

CADILLAC RANCH, BUILT IN 1974, is the product of eccentric helium millionaire Stanley Marsh 3 (he didn’t like the Roman numeral III and found it pretentious). In collaboration with The Ant Farm, a San Francisco art collective, Marsh funded the placement of ten graffiti-covered Cadillacs half-buried in a dusty Texas field. The cars are positioned nose-down and face west “at the same angle as the Cheops’ pyramids”. The cars were actually moved two miles further out in 1997 to avoid the expanding city.