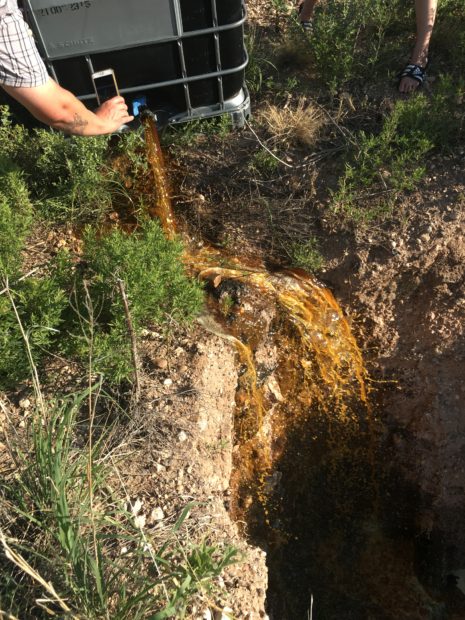 On July 8th, 2017, I released 500 gallons of vegetable oil in two locations at Mariposa Eco-Village outside Amarillo. These projects are called Grease Pour #1 and Grease Pour #2, and participants were myself, the artists Matthew Williams, Jon Whitfill and Harrison Brooks, and Glasstire editor Christina Rees. The event is a reinterpretation of Robert Smithson’s pour pieces he did in late 1969: Asphalt Rundown in Rome, Concrete Pour in Chicago and Glue Pour in Vancouver. 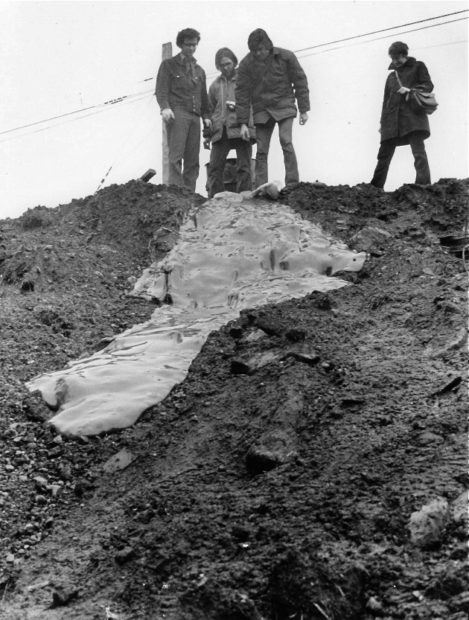 In a matter of coincidence, my pour pieces were performed two days off of the anniversary of Robert Smithton’s arrival in Amarillo 44 years earlier. His visit would ultimately lead to his death in a plane crash ten days later, while surveying the armature for Amarillo Ramp. The Ramp itself was completed posthumously by Nancy Holt, Tony Shafrazi and Richard Serra the month following the crash. Twenty years after that, I first visited the Ramp, and its impact on me cannot be understated. From that day on I began to reverse-engineer my way through art history, while maintaining a mild obsession with Smithson and his work. In a way, it’s his fault I poured all that grease.

Smithson was interested in taking his work out of the gallery system and interacting with the landscape. He began to explore this concept with Non-Sites, but the pour pieces are recognized as Smithson’s first earthworks. His motivations are broad, but my assumption is that he was interested in creating works that took the form of fluvial entropy in terms of space. His continued use of entropy in his work signified his interest in the inevitable breakdown of any system, and essentially, he was trying to make sculptures that looked like erosion. 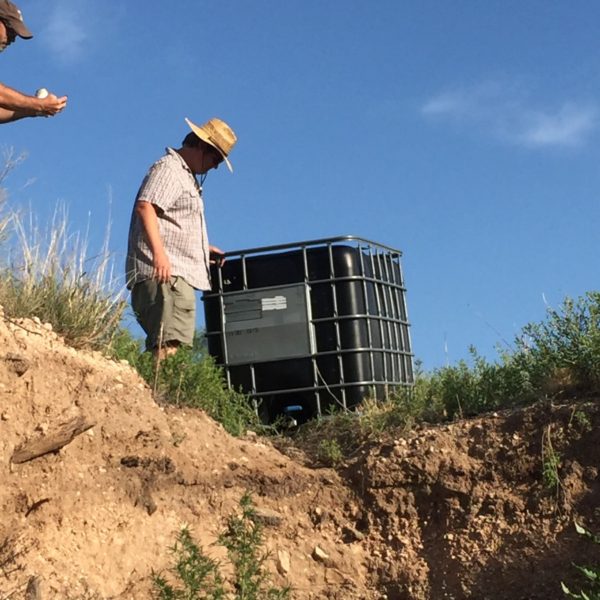 While the initial aesthetic of the my pour pieces are similar to Smithson’s, conceptually they contrast with his work. Grease Pour #1 and #2  build up a system rather than tear it down. Ideally I’m creating works that rely on time rather than space. While Smithson denied being an environmentalist, I consider myself relatively eco-friendly. I recognize that pouring a considerable amount of vegetable oil out in nature seems to contradict this statement, so allow me to explain.

I do not believe in the “Save the Earth” rhetoric that often is the mantra of environmentalists. The Earth will be fine. If we humans get her eco-system too off-balance, she will shake us off like fleas. The environmental movement is actually self-centered because all the measures we instill to curtail our destruction of the environment have the intention of maintaining the habitability of the planet for humans. The mantra should be really be “save the humans,” and this I can get behind. The way we do this is through changes in the way we live and repairs to the damage we have done to the environment. This is part of the reason I became the artist-in-residence at Mariposa. 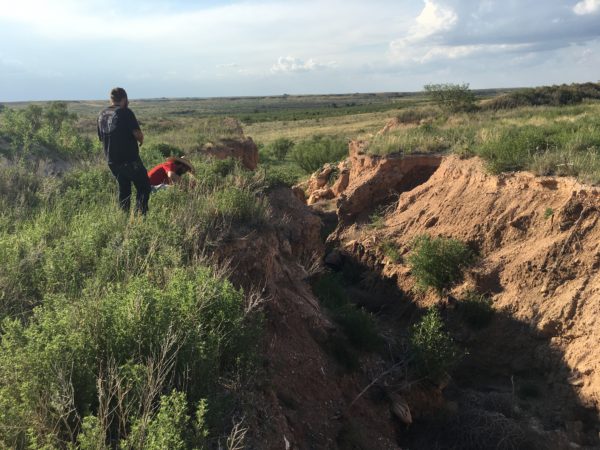 Mariposa Community Land Trust (or Mariposa Eco-Village as it is commonly known) was created more than 15 years ago. The original idea was to create a sustainable community on the site of an old quarry. The project floundered for years, and I approached the board president about doing a land art project. My original idea was to apply an abstract structure to the site to conceptualize the space. My early attempts failed, but I was influenced by Smithson’s late-career interest in repurposing large-scale industrial sites like mines and quarries into artworks.

And the simple fact that I was out there attempting to do something forced the others involved in Mariposa to do the same. This helped me realize that I wasn’t working on a land art project so much, but rather something more like social practice. My entry into making art, in the ‘90s, was with Dynamite Museum’s Sign Project, in which we installed 3,000 street signs in yards around Amarillo. The public didn’t choose the messages or images on the signs, but they did get to pick which sign they wanted and where it went in the yard. This inevitably effected how the project was received and allowed it to have a defining impact on Amarillo culture. I could argue that Ant Farm’s Cadillac Ranch and even Amarillo Ramp are proto-relational projects, but that’s getting away from the grease.

What I like about relational aesthetics and social practice is that these allow artists’ ideas and works to take on a life of their own. The appearance of the Grease Pour project changes over time and while it’s not affected by viewer participation, it is a metaphor for social practice. Part of the mandate for Mariposa is to restore the landscape that’s been ruined by quarrying. The land will eventually restore itself, but this is long and slow process. 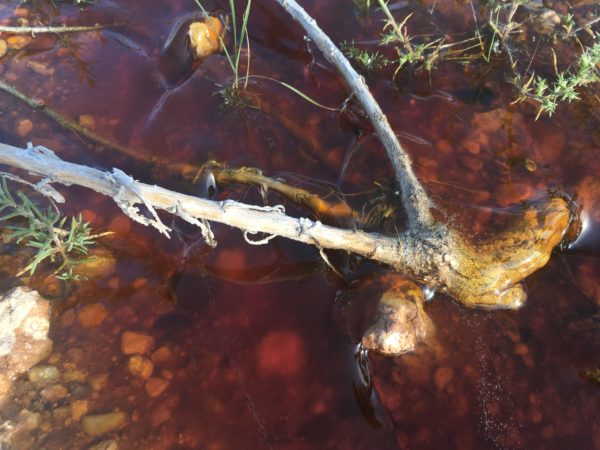 Grease Pour #1 and #2 appear to damage the environment, but actually they do the opposite. The oil will indeed have an immediate negative effect on the plants it covers, and it will impact the soil web. But slowly, the fats begin to break down and provide sustenance for plants and animals. Eventually this will create an area where life will return. 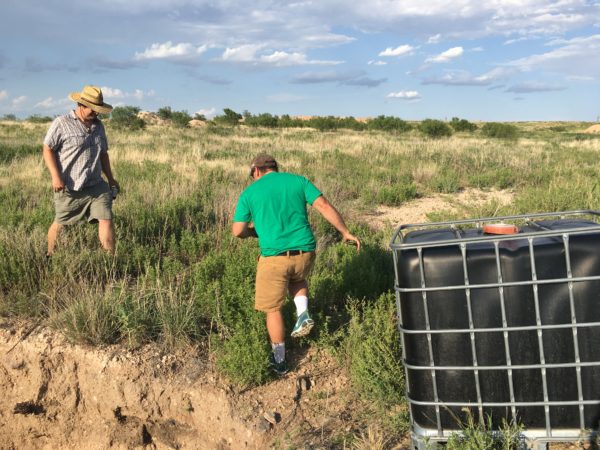 The sites I chose for the pours already had their soil web destroyed. Grease Pour #1 was done at what I call Entropy Canyon, which is a wash that has cut into a ridge line. Entropy Canyon has tripled in size since my tenure at Mariposa, and has revealed the site as an old dump, complete with blocks of concrete, traffic barriers, pipes, wire, and all sorts of miscellaneous debris. The release of the grease here created an awesome grease waterfall (a greasefall?), and a lively grease creek ran for about a hundred feet into the canyon before it stopped. 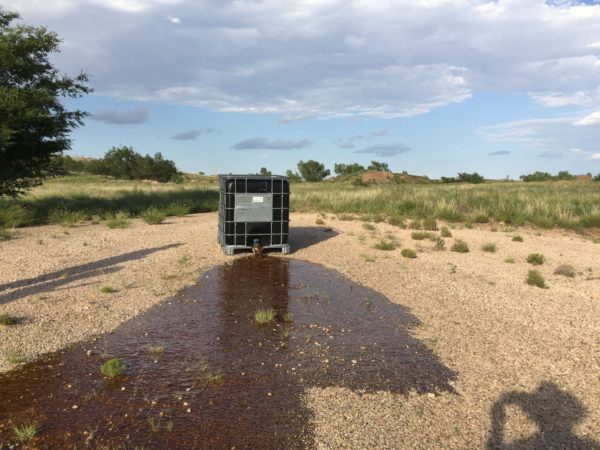 Grease Pour #2 was done on a open hill where the topsoil had been scraped and was devoid of plant life. The grease from this pour spread out off the hill until it found some tiny arroyos, and ran for about a hundred yards until it stopped. Note that neither pour was done anywhere near a running water source, and by the day after, the oil had soaked into the ground, leaving a clear path of its flow with couple of small pools, and a strong smell.

A week after the pours, the pools were gone, and the smell had diminished, and thus far that was about it. I had expected the plants in the immediate paths to die, with the ones on the periphery a little more green. I hoped to see some fat ants wallowing around. All I noted were coyote footprints and a faint claw scratch at the very end of Grease Pour #2, and it was these simple marks that reminded me of my original intention. Those scratches are nature’s first efforts in the breakdown of the piece. 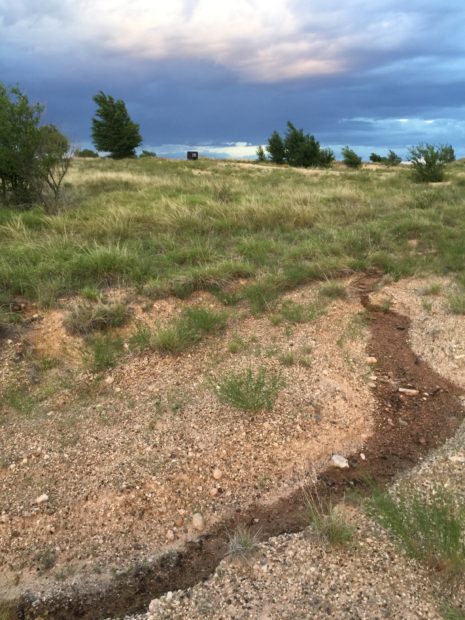 I did the pours to instigate change, even if I’m not around to witness all of it. I suspect the next rain storm will wash out the visual evidence and disperse the grease into a larger area, thus accelerating the break down of the lipids, and act as a catalyst for growth. My bet is that the change won’t even be at the pour sites; it will be several hundred yards downhill where the flora may be a little more green and fauna may be a little more active. The effects are intentionally ephemeral, and intended to fade away.

The Grease Pours represent a dialectic that is challenging to classify, and extremely hard to commodify. They could be land art, conceptual art, possibly sculpture. They could fall into the classification of relational works, social practice, or even post-internet, since most the documentation will exist online in digital format. They use the vernacular of photography, video art, and possibly performance art (especially the forklift drive to get the containers to the site). The pours are none of these things and all of these things at the same time. 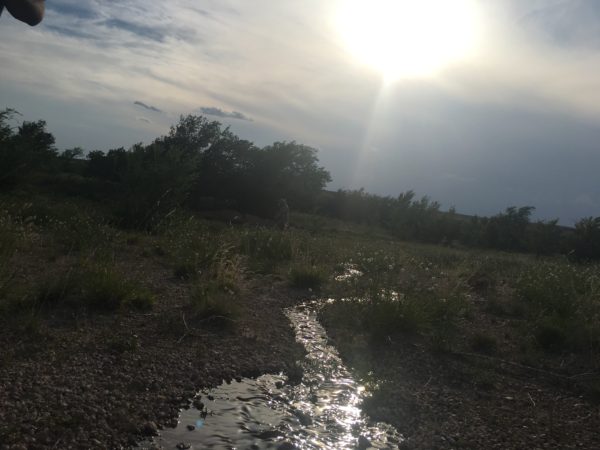 This dialectic is the greatest lesson I learned from Smithson. It is the meeting place between contrasting ideas, and the Grease Pours are a manifestation of this: the Pours initially seem damaging to the environment, but over time they will prove to be the opposite; the idea of pouring old grease is disgusting, but when that golden liquid spread over a hillside in the West Texas sunset, there was a moment of pure beauty. The Pours exist as both art and not art, and the pours themselves are disintegrating while creating simultaneously. This duality is not unlike human existence because we are both living and dying at the same time.