“Soldier, at Ease” at the Houston Center for Photography 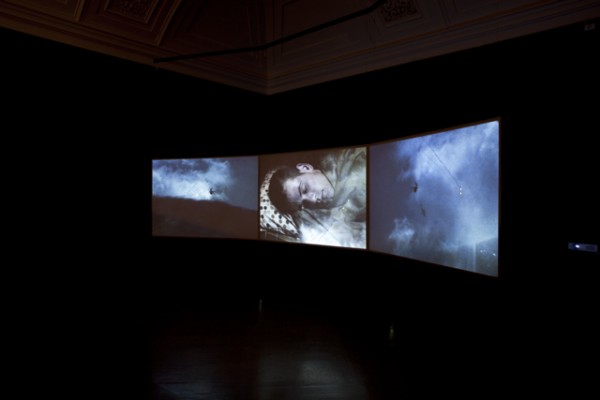 Soldier, At Ease, at the Houston Center for Photography, runs concurrently with the extensive WAR/PHOTOGRAPHY exhibition at the Museum of Fine Arts. Both exhibitions include works by Tim Hetherington, Louie Palu and Erin Trieb. WAR/PHOTOGRAPHY focuses on an exploration of the role of photography in documenting various aspects of conflict, including the periods between fighting. Soldier, At Ease exclusively “looks at how active soldiers spend their private time ‘at ease,’ while they are off duty, and also when they return home.” Together, the works of the three artists present dynamic portraits of infantrymen and women that extend beyond their roles in combat.

Tim Hetherington’s contribution, Sleeping Soldiers (2009), is a five-minute, three-channel video projection. Shot in Afghanistan, the work combines footage of soldiers in the trenches with footage of soldiers resting in their barracks. For what seems to be the first half of the work, the film is constructed as a triptych. A central image of a supine soldier shot from the waist up is flanked on either side by footage of military helicopters, brush and soldiers in combat.

This method of framing is abandoned later in the work and images of soldiers in combat take over the three projections as well as images of unarmed civilians, i.e. local children and men. Much of the imagery of the soldiers sleeping features them shirtless. Their unguarded expressions contrast greatly with the soldiers in combat, yet a thread of vulnerability runs through the two types of images, unifying them.

In one of the scenes of the soldiers in combat, a commander reaches out and reassuringly pats a soldier on the shoulder. The final image of the film is a single image of a soldier stretched out on a bed, at rest, resembling a pieta. The shot brings home the reality that death and the threat of violence are ever-lurking for those in combat zones. Hetherington himself fell victim to the violence of combat zones. He died April 20, 2011 in Misrata, Libya in a mortar attack by Libyan government forces. 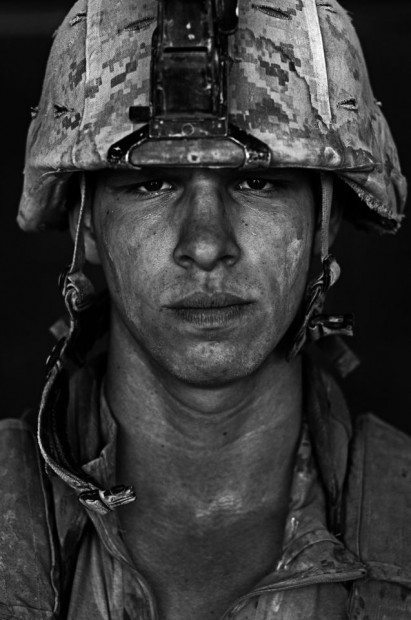 Louie Palu’s Afghanistan: Garmsir Marines (2008) is a series of 15 portraits of soldiers from the 1/6 Marines out of Camp Lejenue, North Carolina, part of the 24th Marine Expeditionary Unit, Battalion Landing Team. Palu was with the unit while they were deployed to Afghanistan and spent most of his time with them, not taking photographs but getting to know the soldiers as individuals. The images that he did take of them were shot in a bunker using natural light after each day’s patrol had ended. Each black-and-white is a head shot of the subject meeting the viewer’s gaze. Palu wanted the audience to “know them in some way, with no weapons, no action, no creative compositions or reportage photography.”

But it is impossible to know them outside of the context of their role as soldiers, given the circumstances that led to their being documented by Palu and the fact that they are photographed in their uniforms. Where Palu does succeed is in conveying the unspoken trauma that these men undergo; the faces of the soldiers, many of whom are in their early- to mid-twenties, are lined and beleaguered and appear much older than their actual ages. Journals belonging to the soldiers or an unframed photograph taken by the subject accompany each framed portrait.

The unframed photographs alongside the portraits capture the activities of the men while they are on and off duty. We are privy to images of the soldiers standing around for group shots, we see one firing a gun through a hole in the wall of a bunker, one image is of a soldier with a young boy wearing sunglasses while another depicts four local men standing in a line. The latter two photographs have a touristy feel to them and begin to allude to issues of imperialism and First World/Third World binaries. 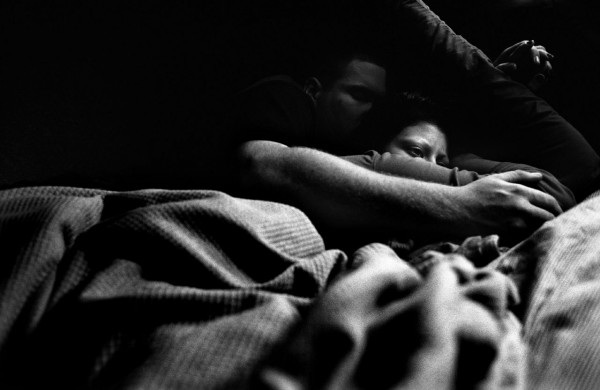 Erin Trieb (Austin, TX)
“US Infantry soldier SPC Adam Ramsey, 22, relaxes with friend, Savannah Gordon, after consuming a mixture of prescription medicines and drugs at his home in Carson City, Nevada, Feb 2010. While serving a 12-month deployment in Afghanistan, Ramsey was diagnosed with PTSD (Post Traumatic Stress Disorder). While in Nevada on leave, he experienced hallucinations, depression and suicidal thoughts. He self-medicated, mixing prescribed medications with alcohol, a common practice among soldiers with post-deployment disorders. Fearing that he would take his own life, Ramsey checked himself in to a mental health hospital after he returned from Nevada to Fort Drum. Jan 2010”
From the series The Homecoming Project
Inkjet print
12 x 18 inches
Courtesy of the artist

Erin Trieb’s The Homecoming Project documents the conditions of soldiers both in and outside of the military. Though Trieb has spent time with deployed units in Afghanistan and, I believe, in bases in the United States, her project focuses on the aftermath of war. Many of the images in The Homecoming Project convey the character and make-up of military communities. There are several images of soldiers conducting training exercises and at play. Yet for the most part, Triebs’s photographs are a sobering rejoinder to the glorifying narratives of the triumphant soldier returning home. She captures the difficulties that many soldiers face as they attempt to reintegrate themselves into civilian life. Trieb presents us with images of soldiers whose attempts at repressing their post-traumatic stress disorder manifests themselves with drug and alcohol abuse or other forms of self-harm. Domestic violence and suicide take an additional toll on their families and friends. It seems as though Trieb’s aim with The Homecoming Project is not to denounce war or the military but to draw attention to the lack of support for returning military personnel.

Although all three artists within Soldier, At Ease successfully imbue their work with a great deal of pathos, it seems that Erin Trieb’s is the most successful, perhaps because her work depicts the soldiers in a number of contexts that enable the viewer to identify with them beyond the capacity of their roles in combat. Although Trieb’s images present her subjects in a manner that respects them both as individuals and as servicemen and women, she eschews casting them in the narrative of heroism that could likely overshadow the very complicated experiences that they have undergone and continued to be subjected to. Because we see the soldiers in an expanded field that speaks to their roles as sons, daughters, partners, siblings and companions, Trieb allows us to see them as individuals whose jobs have left them with an extremely complex set of circumstances to grapple with. She opens  our eyes to our responsibility to assist them on their paths to recovery.

Sally Frater is a curator and writer based in Houston. She is currently a fellow in the Critical Studies Program at the Glassell School at the Museum of Fine Arts and the Artist-in-residence at Project Row Houses.