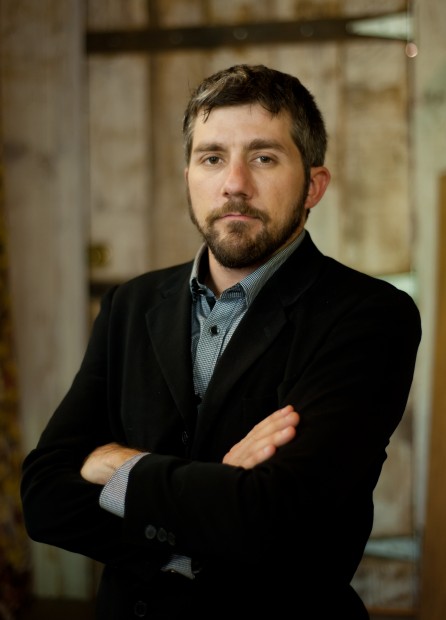 Paul Middendorf came to Houston for the first time as curator of the 2010 Big Show at Lawndale Art Center. He was impressed with the city and set up a series of ongoing artistic exchanges under the auspices of a non-profit he has run out of Portland, Oregon since 2005, galleryHOMELAND. Now he has opened an official satellite space for galleryHOMELAND at 2327 1/2 Commerce St. and works as a director at Gallery Sonja Roesch. Wax by the Fire sat down to ask him about his nomadic past and Texan future.

Wax by the Fire: How would you describe galleryHOMELAND and your work as a curator?

Paul Middendorf: I have always felt that as a curator you had a special talent or rather opportunities at hand. You have a space to put work into, and it’s up to you to choose the artists and what it is you are going to project with it all. Is it a one time show or will it be an ongoing entity?  I have always tried my best to make projects happen to the best of my ability and to keep them moving forward.  If I stalled with funding, I put the money up myself and hoped for the best possible outcome.  If we needed more, we reached out to private donors and supporters or threw a party.

I have always used my projects as a way to continue a conversation or start new ones.  Bringing artists, organizations, and even cities together is a powerful thing.  With one successful project, a half dozen other projects would come from it. Some of these myself or galleryHOMELAND would be part of, and others went through other organizations or through the artists themselves. It’s what I would like to think most curators and directors are trying to do which is make a statement and hope it catches on and sticks.

WBTF: Do you make a distinction between your curatorial practice and your work running galleryHOMELAND?

PM: Not really. I have always kept them very similar.  However, there are times where I am working with another organization, institution, or space and I try to stick with their mission and vision.  My first introduction to Houston was being invited to jury The Big Show in 2010.  I hadn’t ever worked on a project quite like it.  It was overwhelming, but amazing at the same time.  I worked closely with every one of the lovely staff members at Lawndale, and with the help of Christine West and Dennis Nance, I did my best to put on a great show that gained exposure for the regional artists and continued with Lawndale’s mission.

Currently I am working as a director of Gallery Sonja Roesch.  Through their pre-existing programming and wonderful stable of artists, I am working collaboratively to further the vision of the gallery and work on some new projects in the future.  At the day’s end, we are all working together in the same community, building a stronger foundation for the arts.

PM: My journey as a curator, and ultimately how I started galleryHOMELAND, was as a way to help young artists further their exposure outside of the regions they were working in.  As a curator, I started a project called Manifest Artistry.  Manifest Artistry was a positive spin on Manifest Destiny in the sense that most of the curatorial projects were in collaboration with cities like Miami, Chicago, and NYC.  As I have always felt, just make the project happen!  So in the beginning many of my endeavors were self-funded.  I figured that I would get the ticket and that would act as the shipping expense, and while there, I could also set up future projects. This worked so well in fact, that as a younger me, I felt I had stumbled onto some sort of secret.  I had 5 or 6 projects happening around the country in any given year.  I ended up curating projects that found their way to the Scope Art Fairs in NY, Miami, the Hamptons, and the Istanbul Biennial,  and worked with great artists like Mary Mattingly and Crutch Master and even did an evening performance as part of a Jeffrey Deitch event.

After that, I turned my attention back to Portland. Instead of supporting the arts community by gaining national exposure I redirected and started to work on the foundation of the structure locally.  I was doing a lot of work for a few different arts nonprofits.  I ended up working with Commissioner Sam Adams, who is a great advocate for the arts in Portland, and became the mayor of Portland shortly thereafter.  Around that time, I decided that I would start up this project galleryHOMELAND with my wonderful and talented friend Paige Saez and we began working away day and night.  Using a structure based on flaws we noticed with a few pre-existing arts organizations and nonprofits, we geared our organization toward artists and focused all of our funding on residencies and exchanges.  Just a change up in programming, administrative, and financial structuring. Well, that is how it all began.  galleryHOMELAND was an importing and exporting arts nonprofit.

WBTF: What do you do to sustain yourself as a leader of an arts organization?

PM: With everything I do, I do it to the best of my knowledge and capabilities.  If you stay true and honest you can’t go wrong.  I have always worked in my business relationships exactly as I would work in my personal friendships. To me, they should be the same.  I have always enjoyed collaborations, and that is how I see most of the work I do.

With running an organization, you have to think about the longevity of it all, your staff, and the artists you are working with.  Man, in the early days, I would burn myself out all the time trying to get all the pieces to fit perfectly so no one was working too hard.  I use to worry so much at the beginning of galleryHOMELAND, I ended up with an ulcer.  The doc asked if I could get rid of the late nights, long hours, drinking, and lack of sleep, and I responded with, “I suppose I could give up the arts and become an accountant?”

PM: Support is a great thing that keeps you going.  Having someone there to put their hand on your shoulder and say “You are doing great!” Man, that’s the best.  As far as running an arts nonprofit and like projects, there are days when you just feel like an art martyr.  It’s tough work.  Some days all you want is a hug.  Yes, I am showing some of my cards, but I don’t mind.  If you have ever pushed me out of my chair, stopped me from pulling my hair, or got me out of bed on those rough days…You are one of my heros!

PM: Well!  I have many projects on the back burner.  I can’t tell you all of them because they are super cool, and you might take them.  At Gallery Sonja Roesch, I am excited to get some weekend artist talks and panel discussions going.  Mac Whitney is an amazing veteran artist of Texas and opens his show in January at the gallery.  We are really excited about this show and are looking forward to starting a strong dialog about public art within the city and state.  So you will have to stay tuned on that project.

With my project space I want to carve out galleryHOMELAND Houston over off Commerce, as a venue to show experimental works, site-specific installations, and unrealized performances. The space is very interesting, and I am chomping at the bit to get some things programmed in there. On December 15th at 1pm, Cody Ledvina will be doing an artist’s talk about his latest installation at galleryHOMELAND Houston.  Also, I am a sucker for some residency projects and have a few things lined up for Portland and Houston.  More on that later.

WBTF: Any words of wisdom for aspiring curators?

PM: I love what I do.  What a great job we have working in the arts!  Sure, it’s hard work and not always appreciated the way we feel it should be, but that could be said about all jobs.  I really love being part of a community and working directly with the city and you should too.  Houston opened its arms up to me the day I set foot on its soil and for that I am grateful. Being brought in by Lawndale Art Center was one of the best choices I made.  I moved from Portland to Houston six months later for the art scene and its community.  It worked out perfectly, because we had just started a conversation back in Portland about branching out.  Today I am still active in both cities, but now Houston is my home.  This is an amazing town, and we all should be proud to be part of it and included in its vast vision.  So here is to the up and up and a big Woot Woot to H-town! Now let’s kicking.