A Study in Contrasts: Paul Thomas Anderson and Laurie Anderson 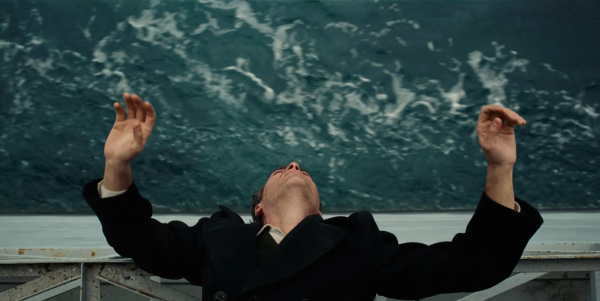 I ended my weekend by going to see the new Paul Thomas Anderson movie The Master. The film is broadly about a Scientology-like group in post-war America who believe, through processing, that one can uncover past lives thereby healing deep-seated pains. It’s essentially a story about control—who has it and who doesn’t.  Anderson illustrates this theme most pointedly in a scene where Freddy Quell, played by Joaquin Phoenix, and the huckster scientist and cult master Lancaster Dodd, played by Philip Seymour Hoffman, are placed in side-by-side jail cells. On the left-half of the screen, Freddie goes wild as he throws his body around the small cell, banging his head on the bed, smashing the porcelain toilet with his foot. He snarls and snorts and writhes, he’s a caged animal Anderson makes abundantly clear. His animalism is reinforced by Dodd in the next cell, shown on the right-half of the screen standing calmly, watching the mad man’s fit, his arm casually draped on the bed. It’s a study in contrasts. This is also about as compelling as the movie gets.

As we were leaving the theater, my friend said he felt that most of Anderson’s films hit the same note as hearing about someone’s dream, and how interesting is that really? I agreed, “It’s only interesting to the one telling the dream.” And so, I imagine Anderson is quite enchanted by his own film—his use of 70mm film, the lush green and blue tones captured in each shot, his constant close-ups of Phoenix doing his best Brando. Enamored with his medium, Anderson forgot to write a story or characters that I could ever really care about. Who wants to hear about your overly crafted dream, Paul Thomas Anderson? 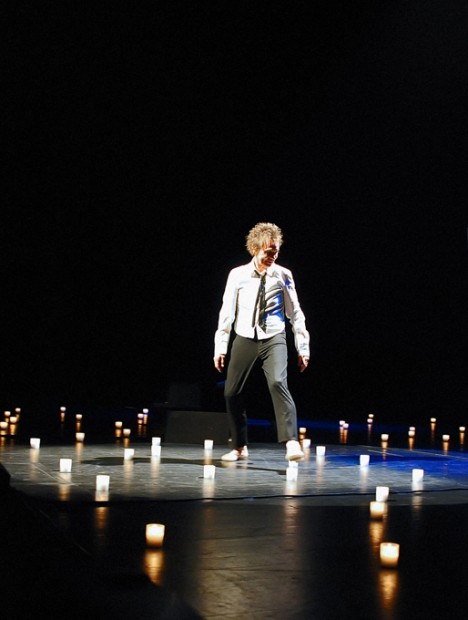 I started my weekend by going to see Laurie Anderson at McCullough theater. She and Paul Thomas Anderson share a last name, and maybe too their propensity to picture a dream-like state, but little else. I kept thinking about my friend’s comment when I was going over Anderson’s terrific set in my head. I mean, Anderson even recounts a dream: “I dreamed the United States was designated a battleground,” she intones in her sing-speak way. “Memories and dreams being what they are, the country is looking a lot like a battleground.” The music and words were often surreal and sometimes my mind wandered, as when listening to the details of a friend’s dream, but the combination of electronic sounds, rambling stories, and Anderson’s beatific presence was wholly enchanting.

Anderson performed Dirtday!, the third part of a trilogy that includes Happiness (2002) and  End of the Moon (2004). The set was simple—votive candles filled the stage, Anderson stood behind her keyboard sometimes wandering over to an armchair to tell a story. The colored gels of the stage lights filled the rest of the set and one small flat screen in the middle-distance reflected the light at odd intervals. Anderson was in her signature get-up: skinny tie, spikey hair.

Dirtday! is what Anderson calls a “dreamscape of words” or stories half sung, set to electronic music, and inspired by the political climate of our current moment—including the world as it exists some ten years after 9/11, the Occupy Wall Street Movement, healthcare in America, and how we deal with death. Perhaps such heavy topics benefit from dream-like sounds and moods. It gives these difficult politics room to move, to not be so firmly rooted in actions and reactions. With Anderson as our generous leader, we’re allowed to ruminate on the pain and folly of this world.

The electronic keyboard and her lonely sounding electronic viola create a sense of dread and remorse in her “dream world of aspirations and regrets.” In one passage, sitting in the armchair and unaccompanied by music, Anderson tells the story of the death of her dog, Lolabelle. She states that she’s had many friends die and recounts the story of the artist Gordon Matta-Clark’s sickness and death: “When he was in the hospital, Gordon invited all of his friends over and he read to them aloud.” In today’s clinical culture she explains, “The main goal is to tend to death with a certain amount of precision . . . and the least amount of mess.” And finally, “The purpose of death is the release of love.” She ends this section by showing two brief YouTube videos of her beloved Lolabelle playing the piano.

Such honest and straightforward language about death and love, not to mention the passing of a pet, might come off as hokey coming from another performer. Again, the mechanization of her sound girds her stories to a type of remote disembodied experience. Her free association begets the viewer’s own free association. So while Anderson recounted her stories of death, I silently recounted my own.

Another thing (among many, of course!) that separates Laurie Anderson from Paul Thomas Anderson, is that Laurie Anderson is funny in her experimentations. Or she resists taking herself too seriously. At one point in the performance she puts a pillow speaker in her mouth because she explains, she’s always wanted to be able to sing like a violin. Her eyes wide with expression and her cheeks full of speaker, the violin emanates passed her lips. The sound modulates pitch as she opens and closes her mouth.

During the encore, Anderson plays her electronic viola straight, unadorned by the keyboard or colored lights, standing at the edge of the stage. It’s a song that could only be described as a lament. “That viola has a direct line to my tear ducts,” I whisper to my friend, tears streaming down my cheeks. By the end of this half-awake half-asleep state, it turns out that Anderson doesn’t indulge so much in recounting her dreams, but instead creates an ambiance and a feeling and a site to explore our own. She leaves it to us to layer that dream onto this reality.

“She leaves it to us to layer that dream onto this reality”…nice!

We saw The Master Saturday and it was a crushing disappointment. We did not care about the characters, there was no story to become lost in, and Mr. Phoenix had so many affectations that we never forgot that he was acting. The previews were the best use of the screen!