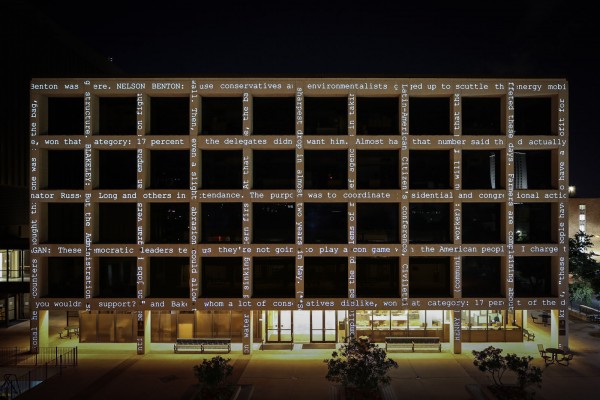 Ben Rubin is a media artist living in New York City who recently unveiled his 6-channel video projection, And That’s The Way It Is . . . on the University of Texas campus. The video presents archived text from Walter Cronkite’s newscasts and closed caption text from contemporary news feeds. Rubin’s work is in the collections of the Art Institute of Chicago, the San Jose Museum of Art and the Science Museum, London, and has been shown at the Whitney Museum in New York, the Reina Sofia Museum in Madrid, the Fondation Cartier pour l’art contemporain in Paris and the ZKM Center for Art and Media in Karlsruhe. I met with Rubin while he was in Austin to tweak the piece.

Ben Rubin: My mom is an artist and my father is a writer and an English professor (now retired). I think, to some extent to my detriment, I took art for granted while I was growing up. I never took an art class in high school or college besides photography and film. In retrospect, I wish I had taken painting and drawing and had a more serious studio-based art education. I took it for granted because I could go to my mom’s studio whenever I wanted and make a woodcut or silkscreen, though I didn’t go often enough. I learned a lot about that stuff from my mom. So I’ve had to catch up, which I started to do during and after graduate school, taking drawing courses and art history. I started to realize the depth of my ignorance.

I probably really realized I was an artist two or three years after graduate school. This is when I made my first proposal for an artwork and then made the first piece that was commissioned for an exhibition. I somehow talked this curator into letting me make this piece! This was in 1993, and prior to that I had studied film and semiotics and computer science as an undergrad and then gone on to graduate school at the media lab at MIT where I studied documentary film. At the time I was also working with technology, video and coding the content of video. I was doing all that and then after grad school I thought I would go into the technology side of things rather than the creative side. I thought I wanted to develop new forms of editing systems for film. Of course it was in the middle of a really bad recession and no one was hiring anyone or initiating any new projects. So I wandered through consulting jobs and then eventually started to do theater design work, in particular with the video artist Beryl Korot and the composer Steve Reich. I really view working with Steve and Beryl and Laurie Anderson and other artists as a type of apprenticeship. For a while my main work was on the technical side for these performance projects. But working with a technical system for Steve and Beryl allowed me to be privy to their creative process on a day-to-day level, which was a unique learning experience.

KG: How does research play into the works you create?

BR: I have started to wonder whether, in some cases, artworks are just a convenient excuse to do the research that is interesting to me. Research, historical research, archival research and in particular, media history of all kinds—Walter Cronkite would be one example, the New York Times another example—the history of media technology is very interesting to me. I’m fascinated by looking at the social and technical contexts of differing periods and the kinds of media that emerged in each circumstance.

KG: How did you end up doing a project about Walter Cronkite?

BR: The project has had a variety of twists and turns and incarnations. As of about two years ago, all we knew was that the project was to be located somewhere in or around the College of Communication. Somewhere along the way, I decided to focus on broadcast television news, but beyond that I hadn’t gotten more specific. Then just last September, we decided to project on the façade of the CMA building where the project is now.

KG: The communications building is really this beautiful grid.

BR:  Exactly. And once we figured it out it, it seemed so obvious. We’d been staring at this façade the entire time! A few weeks later, Andrée Bober, the director of the UT Landmarks program, called and said that the university had decided to dedicate the plaza in front of the CMA building and call it “Walter Cronkite Plaza,” and she asked if we could have the piece finished for the dedication of the plaza in April. I not only said yes, but I was thrilled to insert Walter Cronkite into the concept for this piece. Cronkite gave the piece this focal point that was originally missing. So it went from being something about general television news to something specifically about contemporary television news and the historical counterpoint of Walter Cronkite. 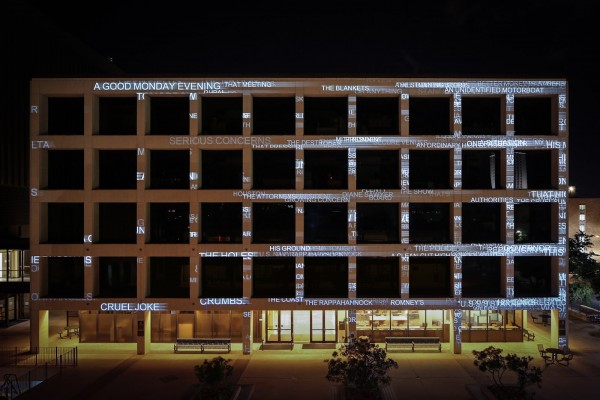 KG: You have been transcribing Cronkite’s newscasts, and the projection piece alternates between projecting the language of these newscasts and the closed captioning of current newscasts. How have these news programs changed since Cronkite?

BR: Each of the Walter Cronkite CBS Evening News broadcasts was beautifully written and very tight journalism. They read differently than the news from the New York Times because the text is meant to be spoken, not read. But it has the same quality of thorough, honest, accurate, carefully described depictions of events. Even if you look at the most formal news broadcasts today, which are the three network half-hour newscasts, they’ve all gotten much breezier and more conversational. There’s more banter and back-and-forth between reporters and anchors. So it doesn’t have the same gravitas, for better or worse. There is a lot to criticize in that 1960s “voice of authority”— it’s not just an object of nostalgia. Yet, I would say that Walter Cronkite had a conscience that was visible and he used his position in the most responsible and ethical way one could hope. And I don’t think the ethos of television news has remained at that level.

KG: So why include the present newscast section?

The present was always part of the piece. It was Cronkite that was introduced. But I think if it was just Cronkite it would be too nostalgic and referential. It’s not intended to be a monument to Cronkite or some kind of memorial; I don’t want to editorialize or insert any kind of editorial voice. What I’m trying to do is present a kind of cacophony of contemporary news and then present this much more singular voice, Walter Cronkite, as a kind of counterpoint.

We forget history, and that’s never been more true than right now. The overwhelming amount of media that is produced now, just because there is so much more of it than in the 1960s and ’70s, and it comes at us faster and in more directions, just means that there is even less time for perspective or reflection. I had this experience two days ago. I was working on the Cronkite archives getting them ready for the work we’re doing now. I randomly pulled up a CBS newscast from the late 1970s with a feature story about global warming. There are voices in the contemporary news media that tend to dismiss the idea that carbon emissions cause climate change, but to see that we have been discussing this idea seriously and publicly for more than 30 years makes it harder to dismiss.

KG: Who worked on the project with you? 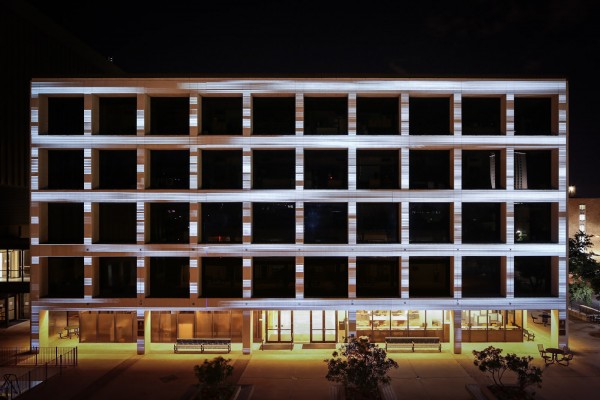 BR: It seems to produce, of my work, the best results. The work I’ve done with Mark is certainly the best work I’ve done. I’ve also had some thrilling chances to collaborate with artists like Arto Lindsay and Ann Hamilton. The sole authorship thing is not as important to me as doing interesting work, and I love having a variety of voices I can learn from in the process of making a piece.

KG: This piece is made from computer code, and you have a lot of experience with coding, which is a type of language. This piece is also fundamentally text-based. Is there a particular reason you chose text over, say, a pixilated image of talking heads?

BR: I guess I’ve been interested in text and what is essentially a cut-up practice since I was a kid. The whole idea of text and grammar—it’s almost like the way the laws of physics hold atoms and molecules together, there are the laws of language that hold words together in a certain configuration. And breaking those apart and reassembling them and discovering new meanings is just something I’ve been drawn to do. It’s hard to say exactly why. . . maybe it’s related to my annoying propensity for puns! I just am always turning language around in my head and this is a way of externalizing that process. The more interesting the language and the more coherent the resulting artwork is, the more compelling the project is for me.

Katie Geha is a writer, curator and art historian living in Austin, Texas. She grew up in Ames, Indiana and received her MA in art history from the Art Institute of Chicago. She is currently a PhD candidate in art history at the University of Texas, Austin. She runs the apartment gallery, SOFA.