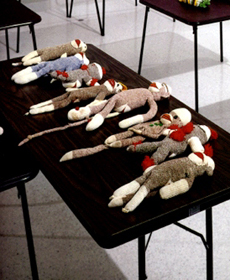 Mike Kelley, a major figure in the “pathetic aesthetic” of the 1990’s was found dead in his home in Los Angeles on Tuesday night by police, called in by a family friend. Beginning in 1993 with his widely influential show Catholic Tastes at the Whitney, Kelley’s conglomerations of stuffed animals, pop-punk banners and oddball sculptural objects blurred youth music culture, pop kitsch, and dark psychology, making him the “irresistible force in contemporary art,” his dealer, Gagosian, says he was.