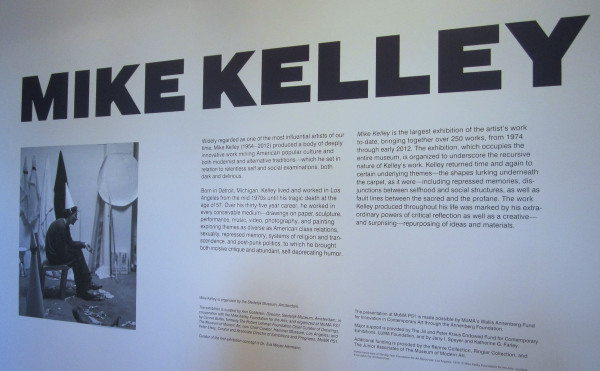 A massive retrospective of Mike Kelley’s work takes up all of PS1’s spaces with over 250 objects and several large installations. It is dizzying and overwhelmingly submerges you into Kelley’s manic, often painful to watch and confusing, world of repressed trauma, memory, and abject absurdity/humor. It is almost impossible to not see in a new light based on the artist’s suicide, and I imagine that almost everything was included because everything feels important under such auspices. I did not leave the exhibition with a clear sense of a chronology, revealing how Kelley changed or grew as an artist. Instead, the different galleries show how wildly Kelley shifted from performance, sculpture, and video to relentlessly squash together the opposite poles of innocence/purity (home/childhood/folk culture) with profane subject matter (pornography, tumors, excrement, garbage, bullying/taunting, etc.). As he explained, “My entrance into the art world was through the counter-culture, where it was common practice to lift material from mass culture and ‘pervert’ it to reverse or alter its meaning…Mass culture is scrutinized to discover what is hidden, repressed, within it.” 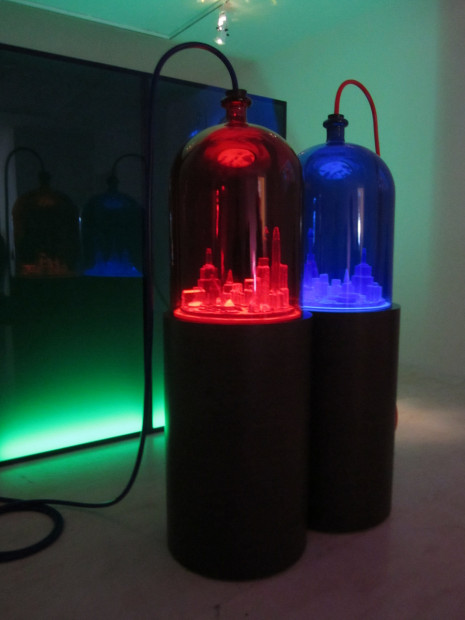 The above image shows a series of work that takes up several galleries. The small worlds under bell jars are inspired by “Kandor,” the capital city of Superman’s home planet Krypton that was shrunken and stolen by the supervillain Brainiac. The sculptures are based on different representations of Kandor and glow in the darkened galleries with purples, reds, yellows, and greens. They feel like a mad scientist’s, sci-fi lair, and they also seem to speak to an idea of childhood or home that is completely irretrievable, tightly sealed away yet glowing with seductive allure. 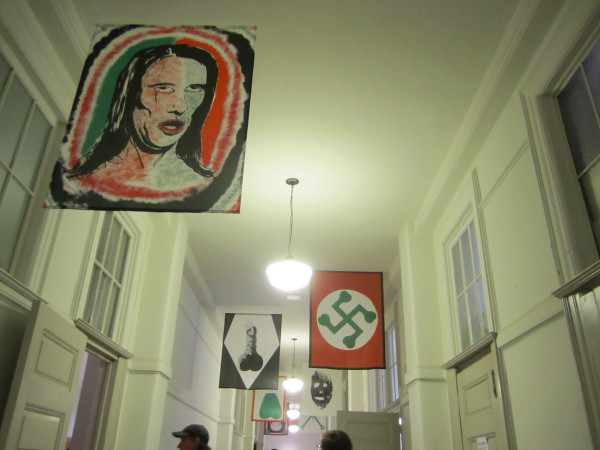 In punk/anti-authoritarian fashion, posters line PS1’s hallways with penises and a swastika. 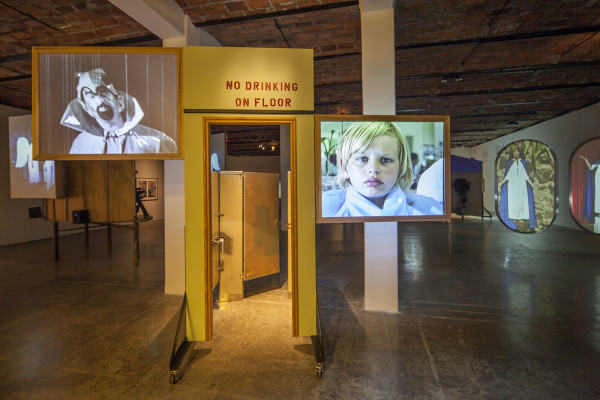 One of the most cacophonous and overwhelming rooms is a multi-screen video installation called Extracurricular Activity Project Reconstructions #2-32 (Day is Done), 2004-05. Twenty-five video installations are shown together that are supposed to be an exploration of “repressed memories” based on images that Kelley collected from high school yearbooks and local newspapers of religious events, costume parties, theatrical skits, and holiday dress-up parties. The Virgin Mary frenetically switches between screens in Switching Marys. A video plays on a toilet stall where a barber lathers shaving cream on a pre-pubescent boy as he taunts him that he’ll shave his non-existent beard unless he wants to look like a “pussy mouth.” People dressed as different monsters walk around in an office/corporate plaza setting where people barely notice them. It is at once completely off-putting, insane, incomprehensible, often funny/campy, and creates a convincing atmosphere of a kind of tortured delirium. It was intended by Kelley to one day be presented as a 365-part project that would be a 24-hour event. 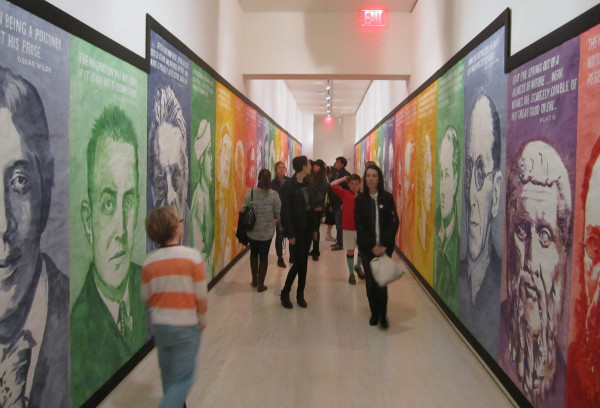 Mike Kelley, Pay For Your Pleasure, 1988. Oil on tyvek, wood, acrylic painting by a violent criminal in New York, 2 donation boxes (collected money to be given to a victims rights organization)

Forty-two banners show a hall of famous philosophers, artists, writers paired with their own quotes that speak to a link between art and violence/evil/destruction. Kelley specified that each presentation of this corridor has to be shown with an artwork made by a violent criminal from the area alongside a donation box for a local victim rights’ association. 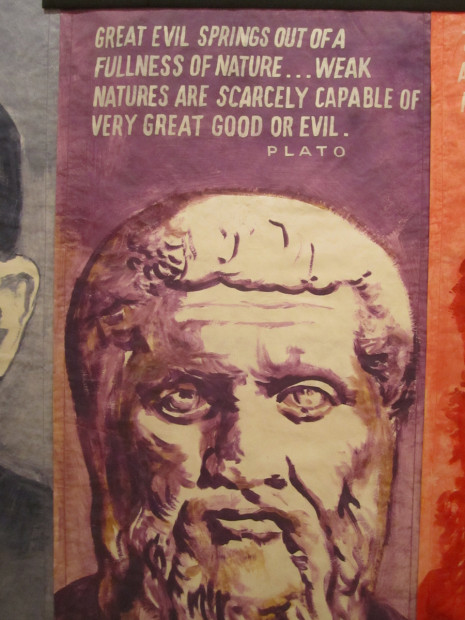 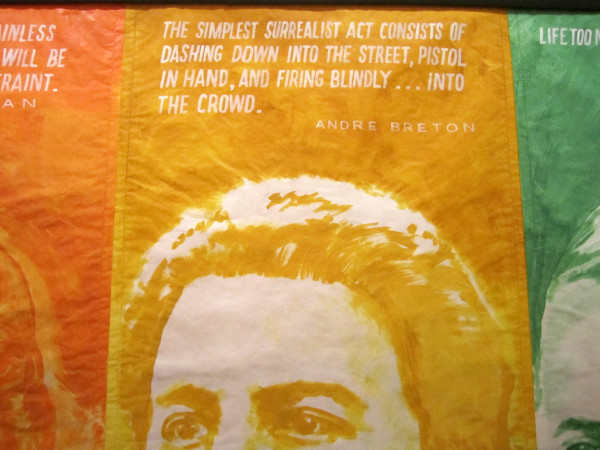 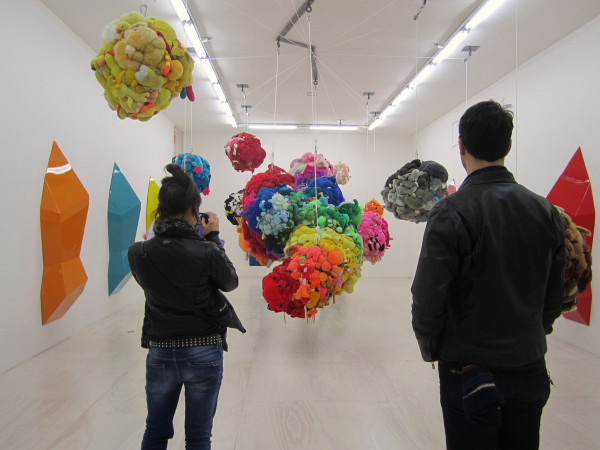 Kelley’s famous work with cast-off stuffed animals and homemade, plush dolls is on display in many pieces. The above installation has massive deodorizers whose design is inspired by high-performance sports cars that “clean” the clumps of hanging, found stuffed animals. Kelley says, “The stuffed animal is a model of a baby; the proportions of it are the same as that of a baby. This surrogate baby is sexless, it’s soft, and it’s clean. My contention is that, for the adult, this is the model of a perfect child. Everybody knows that children are, in actuality, prone to being dirty, they are strong and active, and that they are sexual beings. These are not secrets. These toys conform to the cultural clichés of what children ideally should be.” The clumped animals seem to reference Kelley’s other drawings of steaming excrement and tumors. 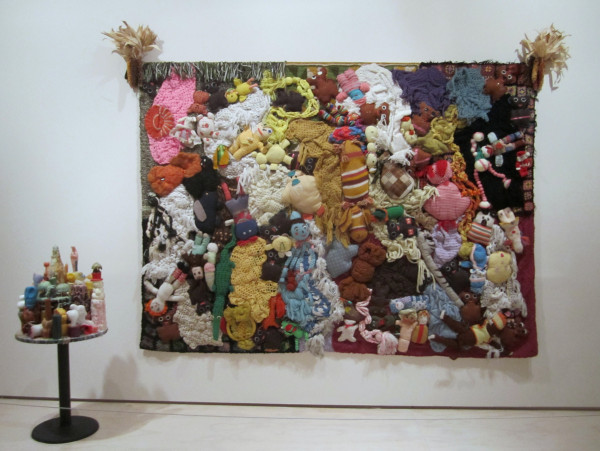 Mike Kelley, More Love Hours Than Can Ever Be Repaid and The Wages of Sin, 1987 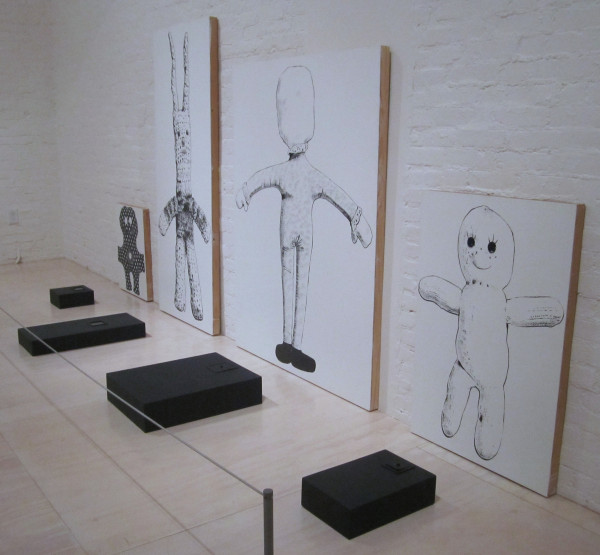 Drawings of handmade dolls are paired up with black, coffin-like boxes to fit them. 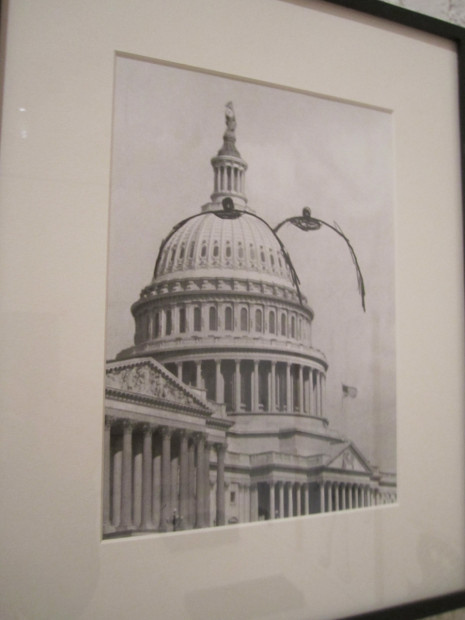 Kelley was an avid collector: from decorative materials (buttons, beads, costume jewelry, coins) to handmade dolls to these graffitied drawings. He attributed them to anonymous grade school students, and said they come from used textbooks on American history. He exhibited 61 selected images as the series Reconstructed Histories. 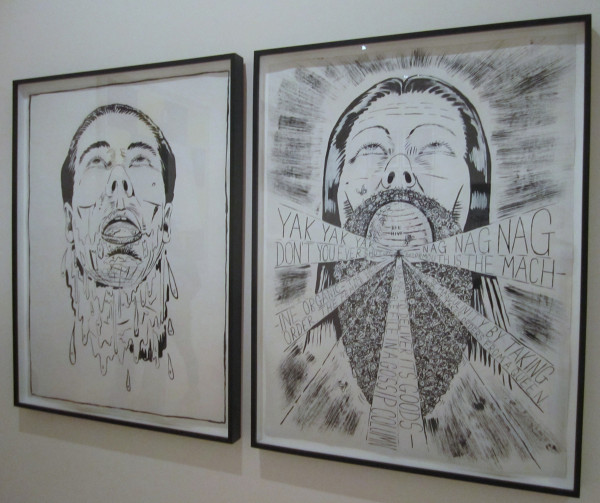 Kelley’s black and white drawing style is on view in tons and tons of drawings of psychological distress or gross out subject matter (garbage bags, intestines, tumors) usually paired with text. 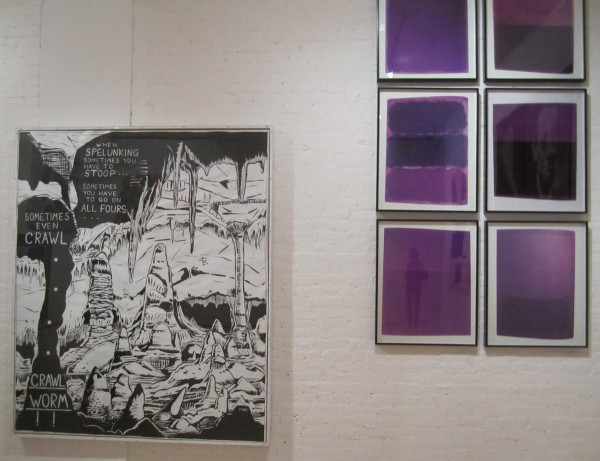 Above are works related to a performance Kelley did mixing ideas of Plato’s cave, the Rothko chapel and, somehow, Lincoln’s profile (?). The wall label said the performance played with ideas of lightness/darkness and internal vs. external worlds. Visitors would crawl under a painting of a cave to enter an inner space draped with banners and Rorschach-like paintings on bed sheets. He also did a performance with Sonic Youth called Plato’s Cave in 1986 at Artists Space, a recording of which played in the gallery. 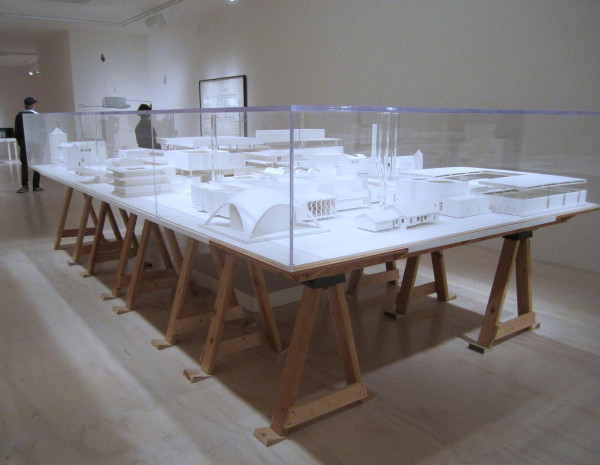 Kelley created created this architectural model of versions of every school he attended through his life and his childhood home. There are also several blank or “unremembered” zones. High school/classrooms/educational authority (“the lecturer”)/bullying are reoccurring themes throughout the entire exhibition. It is clear that adolescence and high school was an obsession for Kelley for how it related to psychological trauma, repressed memories, and sexuality. 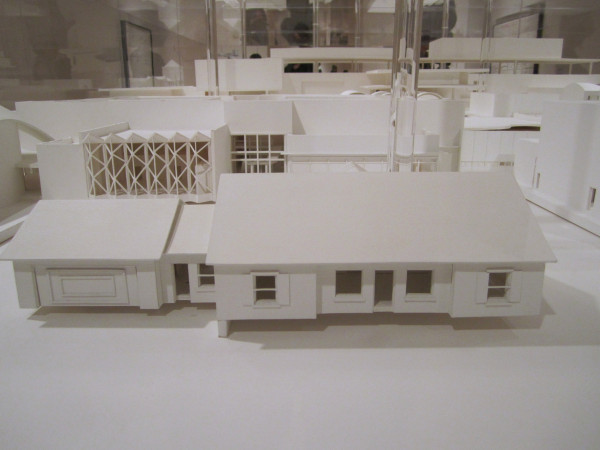 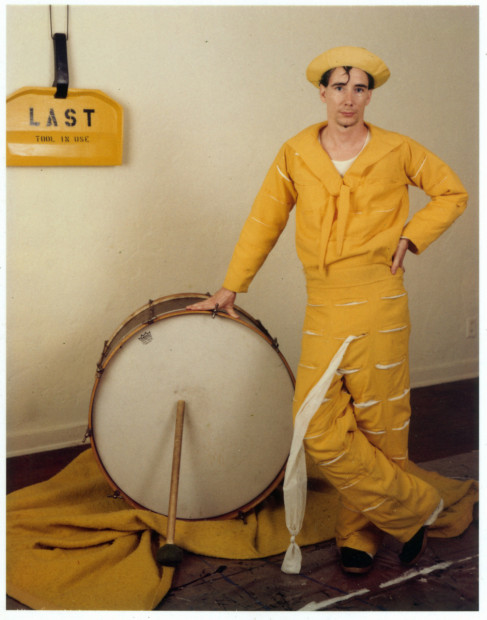 Many performances from the late 70s and early 80s were represented by documentary photos, video, and Kelley’s sketches/plans. In the “Banana Man” performance, Kelley had heard of the Banana Man, a vaudeville-style character on the children’s television show Captain Kangaroo, but he had never actually seen him perform. He created his first video of his Banana Man performance based on friend’s childhood memories, from which Kelley recreated and improvised. In the drawing below, it shows how Kelley’s attitude toward the Banana Man was not one of happy innocence, but a dark perspective where the Banana Man is forced to entertain: “Children drawn together in a collective feeling for torture. They ignite a spark and a banana flame rises. Must smelling like a lit fart. The Banana Man. A big joke. A focal point for ridicule. He gives a lot and gets a lot.” 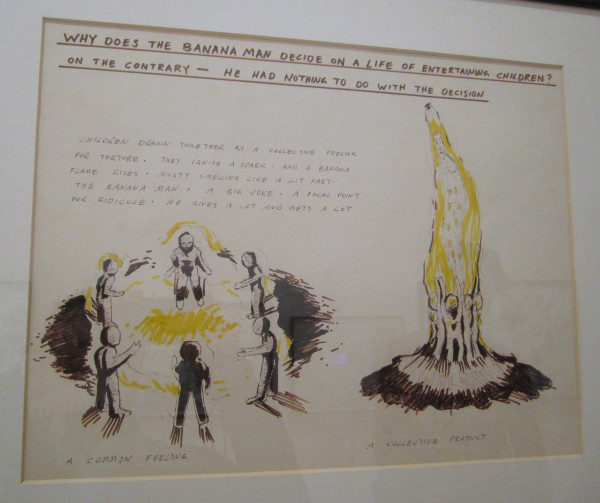 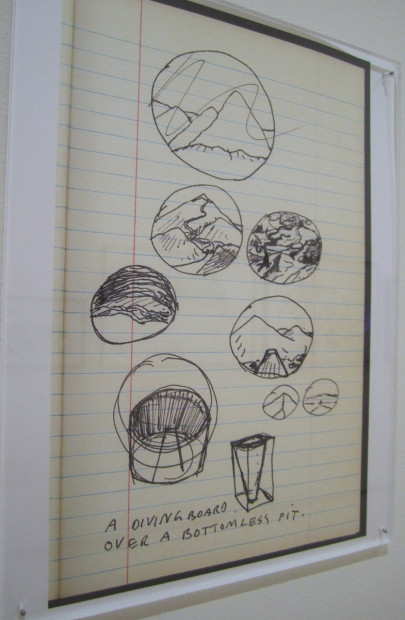 I included the above and below sketches/drawings because they show the kind of existential crisis running throughout much of Kelley’s work as he questions how we relate to our self, past, and future. They are often sad and nihilistic, but peppered with rare glimpses of hope. 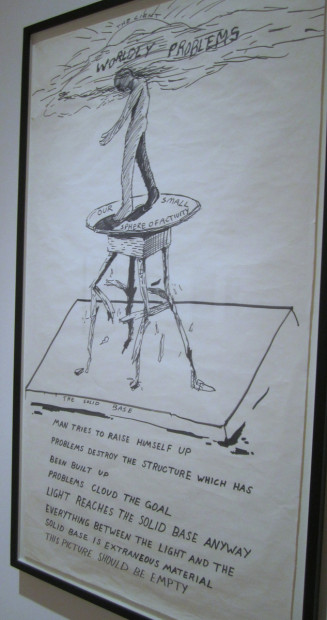 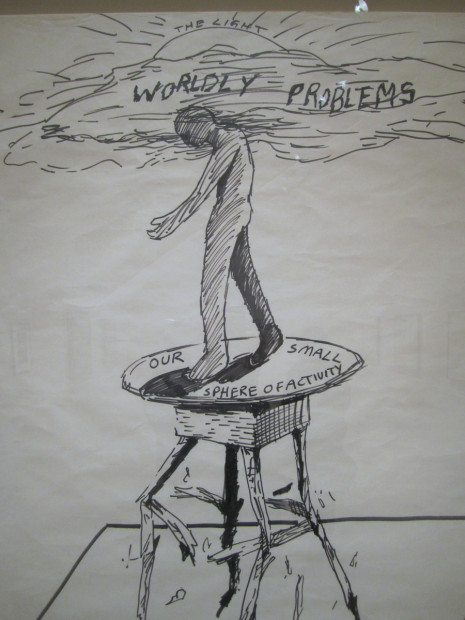 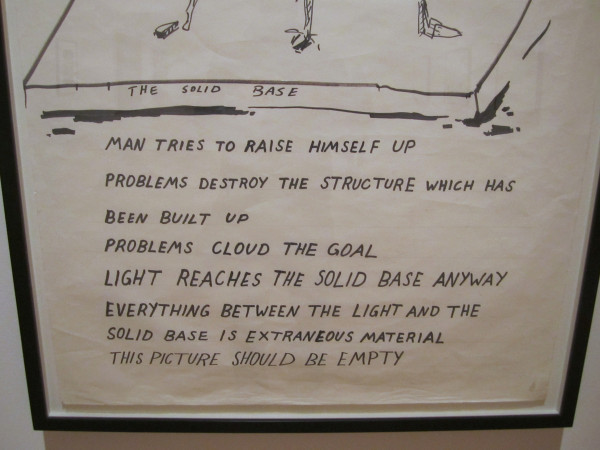 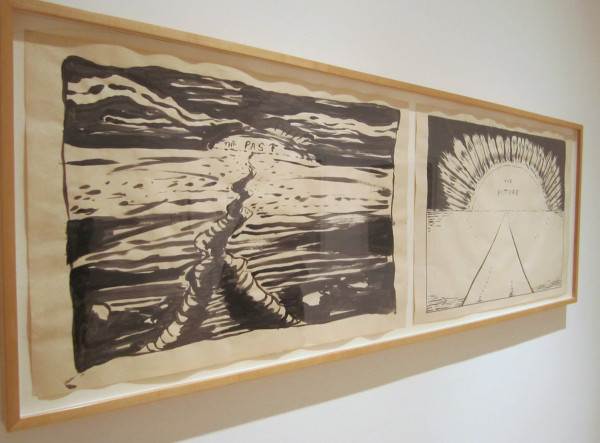 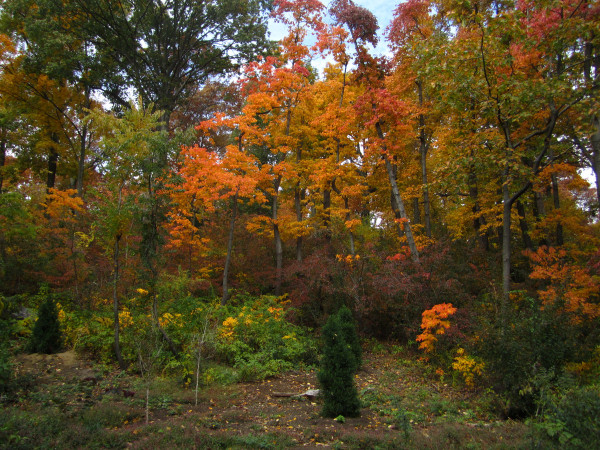 A place where fall happens! On the walk to The Cloisters … 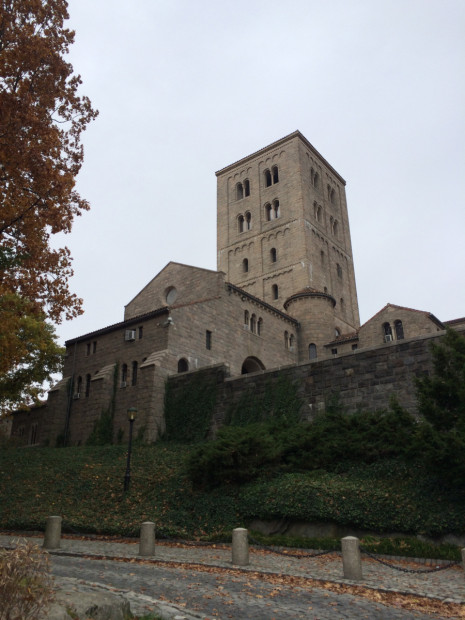 The Cloisters museum and gardens opened in 1938 and houses art/architecture of medieval Europe from the Metropolitan Museum of Art’s collection. It overlooks the Hudson River, and is a museum building built to quote different forms of ecclesiastical and secular spaces arranged in chronological order. 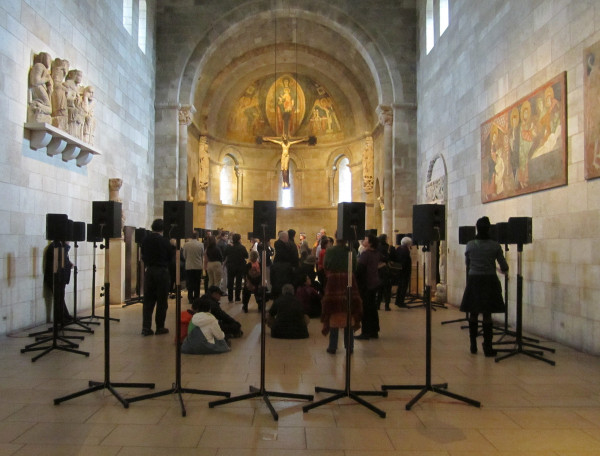 Janet Cardiff, The Forty Part Motet, 2001, Installed at The Cloisters

On view was Janet Cardiff‘s masterpiece The Forty Part Motet, 2001. It is a sound installation that places 40 hi-fi speakers in an oval. Each speaker plays one singer’s voice which Cardiff recorded to separate out bass, baritone, alto, tenor, and child soprano. The chorus sings an eleven minute reworking of Spem in alium numquam habui (1556?/1573?) by Tudor composer Thomas Tallis (ca. 1505–1585). Spem in alium translates to “In No Other Is My Hope.” 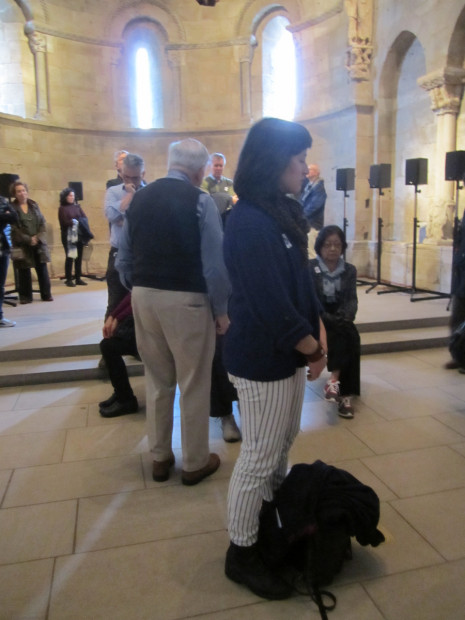 It is completely enrapturing and transcendent. When you close your eyes, it sounds like the chorus is right there only to open them and realize it is a boxy, black speaker. When all the voices join together in unison, immersing you in sound, it completely fills the space with a kind of warmth and energy that is hard to describe. I am not sure I have ever seen an audience so silent and respectful. One woman sobbed at the end. It was an uplifting experience after a weekend of art that often revolved around our disconnection, psychological fragmentation, and personal agony.