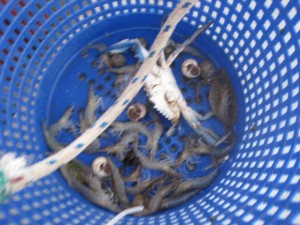 Creative Capital, self decribed  “premier provider of risk capital in the arts” has announced its 2012 grant recipients in visual arts and film, and the list of 46  (chosen from among 3,247 applications) includes a single Texas enterprise: Eric Leshinsky & Zach Moser’s Shrimp Boat Projects, working in and around Galveston Bay catching shrimp (occasionally) and splicing the sundered threads of contemporary culture (with regularity). Creative Capital will provides the grantees with up to $50,000 in direct project funding, plus advisory services “valued at more than $40,000” if anyone would pay market rates for them.