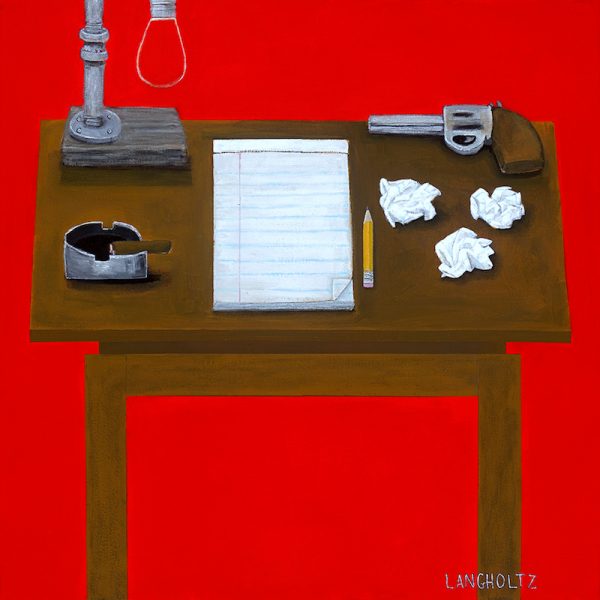 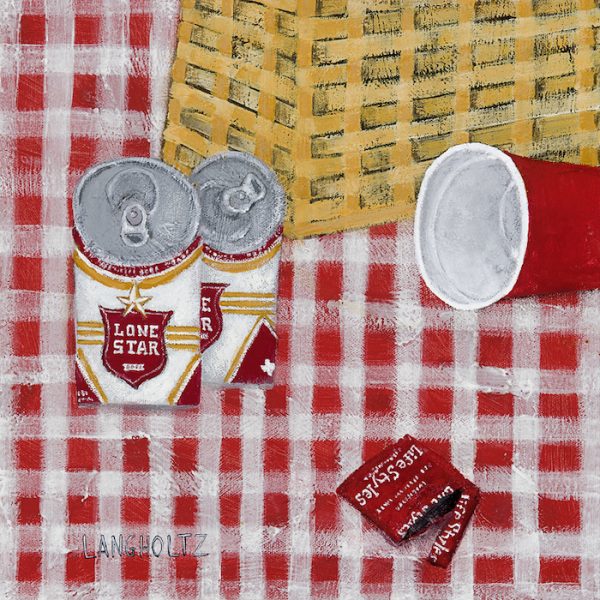 Against a flat blood-red background, an empty notepad, three crumpled pages, a half-smoked cigar in an ashtray, a sharpened pencil and a pistol at the ready share a tabletop with what appears to be a homemade desk lamp with an oddly noose-like bulb in The Last Word (2018, pictured at top). A basket, two cans of Lone Star beer, a red plastic Solo cup, and an opened LifeStyles condom wrapper sit on a red-and-white checked cloth in Lone Star Picnic (2015).  A bottle of chloroform and a white handkerchief stand on a blue table in front of a single Windsor chair in Match Maker (2017). 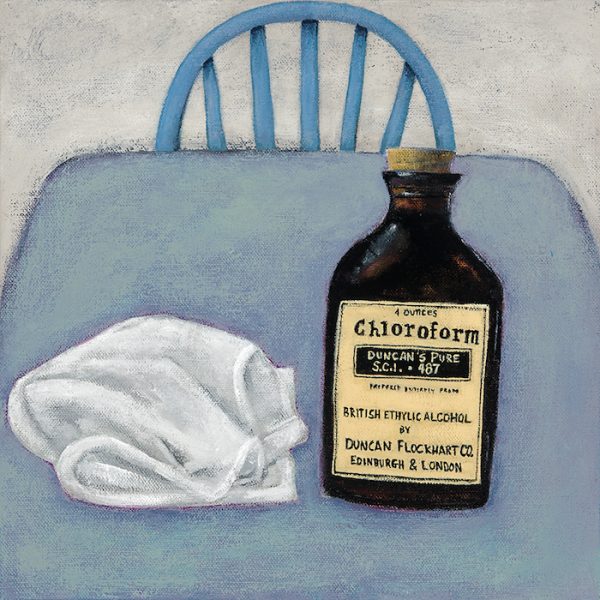 The exhibition was titled Americholia, and its author the forty-seven-year old self-taught Texas painter Gabe Langholtz. You can be forgiven for not knowing his name, even if you live in the Austin area. Now based in the suburb of Pflugerville, Langholtz came to art relatively late, his interest sparked by finger painting alongside his two-year-old daughter. Early on, he painted abstractly: buzzy striped canvases, geometric harlequin patterns, and a few works obviously indebted to Richard Diebenkorn’s Ocean Park series. He had some local success, taking part in some two dozen group shows in Austin, as well as a pair of solo projects in 2016 at the Louis Shanks furniture stores in Austin and San Antonio, where his canvases adorned various displays of domestic mise-en-scènes. 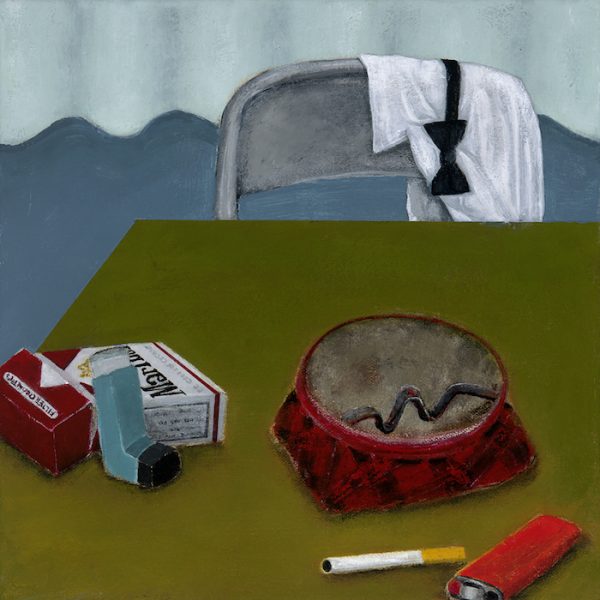 But the paintings in the New York exhibition marked a major national debut of Langholtz’s figurative mode, to which he turned his hand about five years ago, quickly becoming adept at rendering allusive, usually everyday items, often with flattened, upturned, nearly Cubist perspective, and terse, funny titles. These paintings’ quirky charm and deadpan affect can easily invite comparisons to outsider art, yet they possess a stealthy sophistication that belies the artist’s categorization of them on his website as “naïve modern.” Sad Sack (2017), for example, portrays a brown paper bag in somber tones, its folded-over top edge featuring a subtle yet expressive curve, like the smile of the Mona Lisa turned upside down. On an olive green table in Dos and Don’ts (2017), an asthma inhaler leans against an open box of Marlboros, the syncopated angles of the objects finding echoes in the single unlit cigarette lying askew next to a red BIC lighter in the foreground, the plaid of a bean bag ashtray in the middle, and the black adjustable-strap bowtie hanging over the back of a folding chair in the background. The ashtray’s wavy cigarette rest rhymes with the scalloped edge of a curtain at the top of the picture.

More complex images like this carry a strongly narrative charge, their elements always on the verge of adding up to a story of darkly humorous woe. Langholtz’s succinct suggestions of everyday tragedies can recall country songs, a ubiquitous soundtrack in the Abilene of his childhood. In fact, the artist previously worked as a musician, although not a country one; a singer-songwriter, he once fronted an Austin band called Lust for Jadies, which gigged locally and even released a CD of emo-adjacent tunes in 1998, before disbanding and vanishing with barely a trace. Growing disenchantment with the repetition of music and band life left a creative void Langholtz eventually filled by painting. And after a period of trial and error with abstraction, he hit upon the slightly cartoony representational works that fulfilled his fabulist urges. “If you think about it,” the artist has observed, “it makes perfect sense, me being a narrative painter. It’s clearly an extension of my songwriter-self. I was never meant to be an instrumentalist. I’m a storyteller at heart” (email to the author, June 15, 2018). 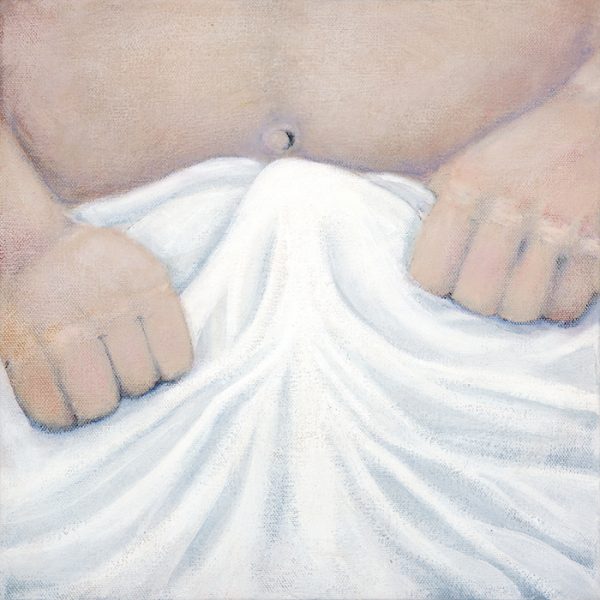 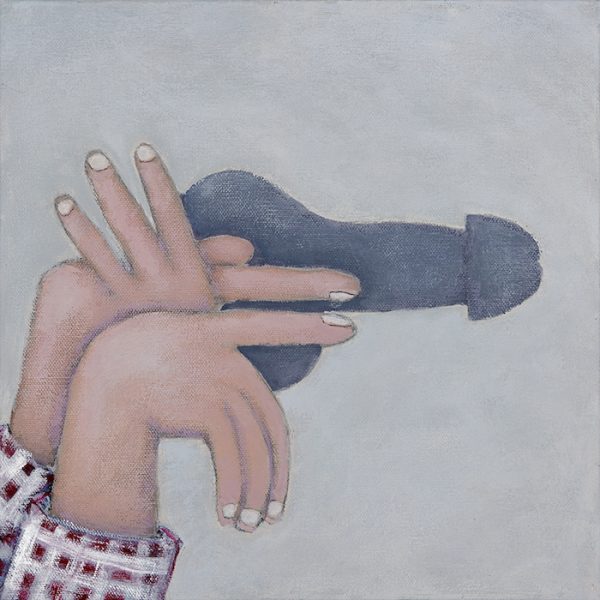 To judge by the paintings themselves, Langholtz’s ascent of a steep learning curve has been remarkably rapid. His early interests in a group of British modernists and self-taught artists, as well as painters like Milton Avery, have given way to his appreciation for artists more attuned to an impulse to tell American stories. Affinities to the work of that touchstone of contemporary painters, Philip Guston, seem obvious in Langholtz’s chalky colors, off-kilter representation, and general caustic tone. But something akin to the work of another Texas original, Kirk Hayes, comes out in Langholtz’s self-deprecation. A sardonic sense of the male ego pervades pictures such as Morning Glory (2017), a close-up of a belly rising above modestly tented white sheets, with the small tumescence framed by balled fists; or Shadow Play (2017), in which hands making a birdlike gesture inexplicably cast the shadow of an erect penis. Despite the drollery, the sexual self-regard in these images goes hand in glove with a more sinister aspect of masculine behavior: misogyny. Lips Are Sealed (2017) shows a cropped woman’s head with a piece of gray duct tape covering her mouth, but that joke isn’t funny anymore. 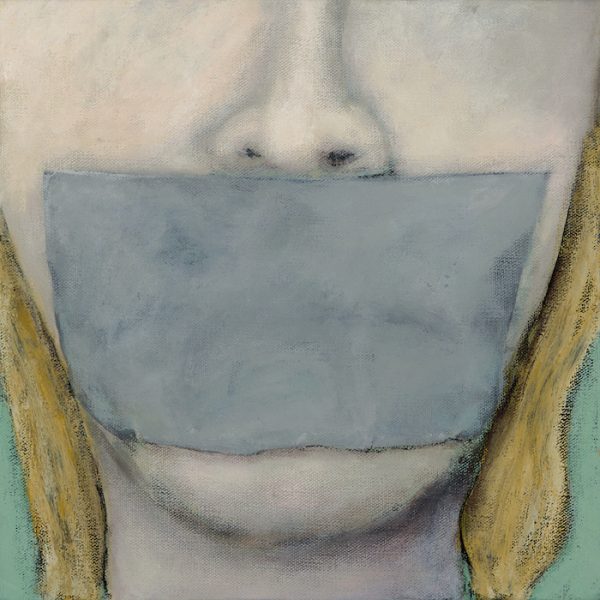 It may be this underlying apprehension of violence cutting through the humor that most distinguishes Langholtz’s work and makes it feel immediate to our present moment. We can readily see the barebones tales in these scenes as describing not just the male psyche of the heartland, but a specifically white male saga where amusing failure quickly spills over into intimations of impotence and seething fury. The artist depicts the few figures in his works as white, with the single exception of the man in Blackbird (2016), drawn in a manner that evokes the work of both Ben Shahn and David Bates, but cropped just below the eyes and giving the finger to viewer. In There Will Be Blood (2018), a white man stabs a paring knife into a wooden table between the fingers of his other hand, a striking image of the self-destructively risky macho game made monumental by the flat expanse of his white-on-white checked shirt at the back of the composition, implying both solidity and girth. 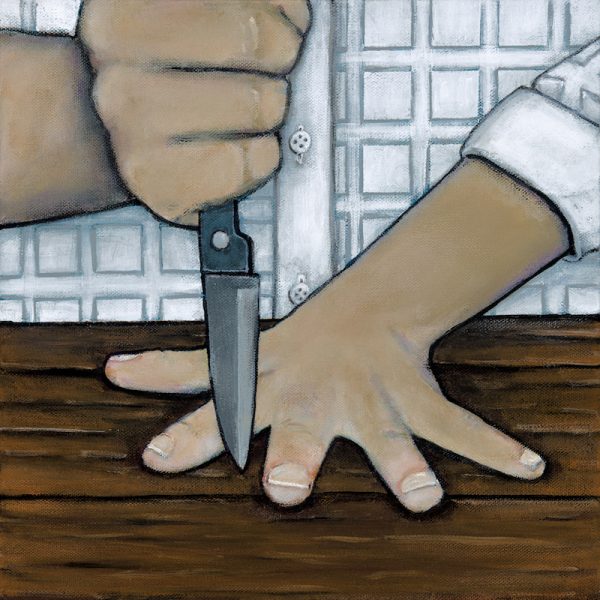 Gabe Langholtz, There Will Be Blood, 2018, acrylic and charcoal pencil on canvas, 12 x 12 inches, courtesy of the artist.

Each of Langholtz’s paintings holds keys to the others. Taken together, they read as a portrait of a certain stratum of the country right now — the America of male rage, of white resentment, of recreational violence, of quiet and not-so-quiet desperation, of despair, of the opioid crisis, Trumpland. That he has gotten under the skin of these people, made us feel this place, without losing his sense of humor, or ours, stands as no small achievement in this age of polarization and stridency. 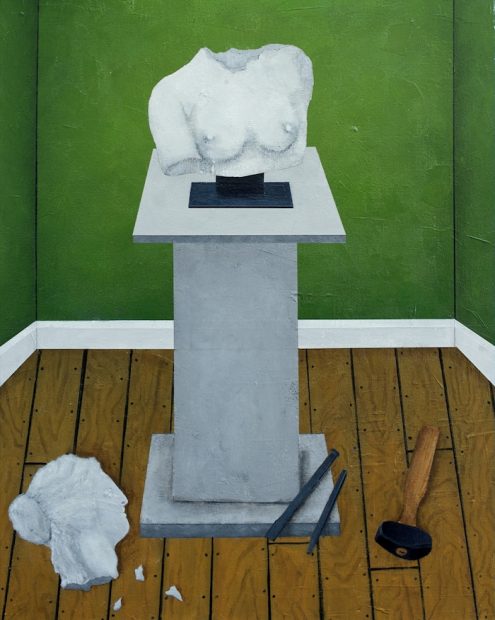 And Langholtz continues to refine and elaborate his idiosyncratic brand of social commentary. In preparation for a three-person show at Austin’s Davis Gallery this fall, he has painted canvases such as Busted (2018), which illustrates a vandalized marble bust of Venus on a pedestal in a green alcove; decapitated, her head lies on the floor next to a hammer and chisels. We can see this as a fairly conventional sign of modernist artistic patricide, fitting, perhaps, as an emblem for Langholtz’s unconventional approach to painting. Yet, given his interest in depicting the violence men do, we can equally regard it as portraying another instance of aggression towards women, the female intellect and power of speech quite literally knocked off by a brutal gesture, leaving only a pair of tits. 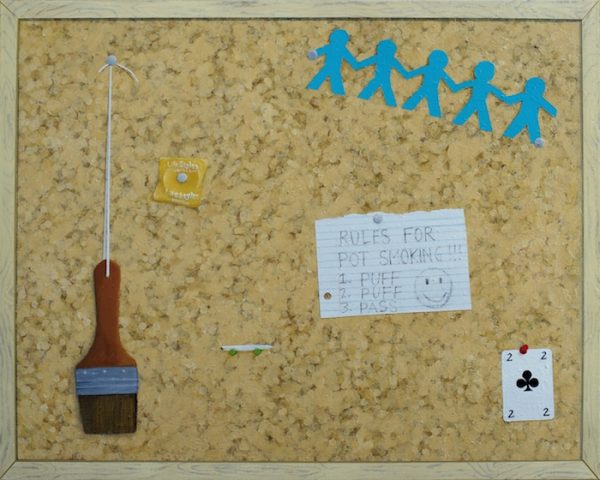 Gabe Langholtz, Pin Up, 2018, acrylic and charcoal pencil on canvas, 24 x 30 inches, courtesy of the artist. 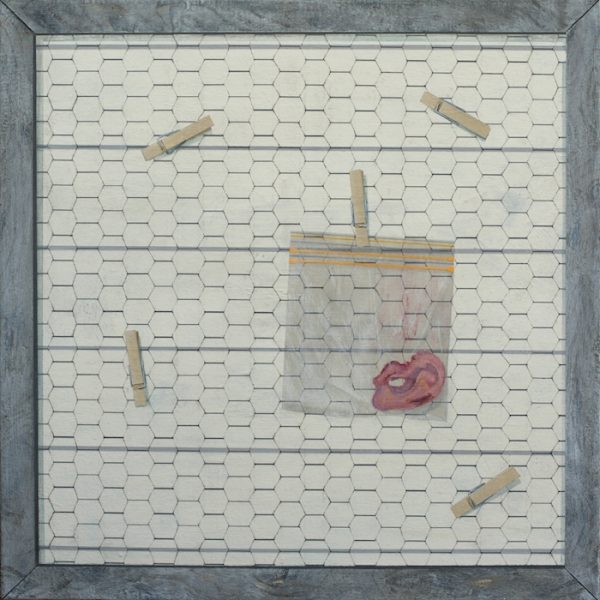 Gabe Langholtz, Forget Me Not, 2018, acrylic and charcoal pencil on canvas, 24 x 24 inches, courtesy of the artist.

Pin Up (2018), an illusionistic rendering of a framed corkboard at actual size, includes a paintbrush hanging from a string, a thumbtacked condom, a rolled joint, and other items in a kind of self-portrait of the stoner artist as a still life, harking back to American trompe l’oeil-painter forebears like John F. Peto. Forget Me Not (2018) features a framed square of chicken wire punctuated by clothespins, from one of which hangs a Ziploc bag holding a severed ear, managing to invoke both Vincent van Gogh’s psychological torment and David Lynch’s deeply unsettling vision of small-town Americana. Stick a Fork in It (2018) revisit’s Langholtz’s origins as a stripe painter; an expanse of gray-and-white banded wallpaper meets dark wooden floorboards without any break in plane, the composition of vertical lines disrupted only by a horizontal baseboard, an electrical socket, and the pronged end of a metal dinner fork on the floor. As in the Landscape with the Fall of Icarus attributed to Pieter Bruegel the Elder, the titular suicidal event in Langholtz’s painting gets lost amidst the glory of the world, or, in this case, in the majesty of a tongue-in-cheek parody of late modernist abstraction. As he grows ever more assured as a painter, Gabe Langholtz seems ever more necessary to contemporary painting.

Fabulous! You are unabashedly and unapologetically you and I love it. I also feel the small canvas size adds to the story of each work; like it needs to be whispered to be truly heard making you lean in and concentrate to hear each syllable pronounced and inflected. I am beyond excited for you Gabe. Grats, very well deserved Grats!!

As a collector and admirer of Gabe’s work, I wholeheartedly agree with this wonderful article. Gabe’s works often appear whimsical to the casual viewer, but carry a much deeper meaning upon further reflection. Some paintings whisper of loneliness, depression, and the need to run away. Others reveal the social, political, or sexual taboos that we all are familiar with, but never publicly express. Often, they indicate the uncomfortable temptations and demons that we all fight. The ludicrousness we experience in our daily lives. These are far more than paint strokes on canvas. These are scenes that urge us to evaluate our beliefs, fears, and prejudices. My favorite paintings of Gabe’s are those that pose the questions: “Why am I here? Am I important? What do I do now?” Questions that we all should ask ourselves on a regular basis. Bravo to Gabe for asking the hard questions through your art. I’m thrilled to see that the world is starting to listen.

What a wonderful and insightful write up about Gabe’s work. I love that upon first viewing you see random objects…. sometimes a single item. But as you continue to look at the images, a deeper understanding forms and suddenly, you realize the intention. Sometimes funny, other times dark but always thought provoking. I love his work!

We can say that we knew you when…. This is a great write up and well deserved.