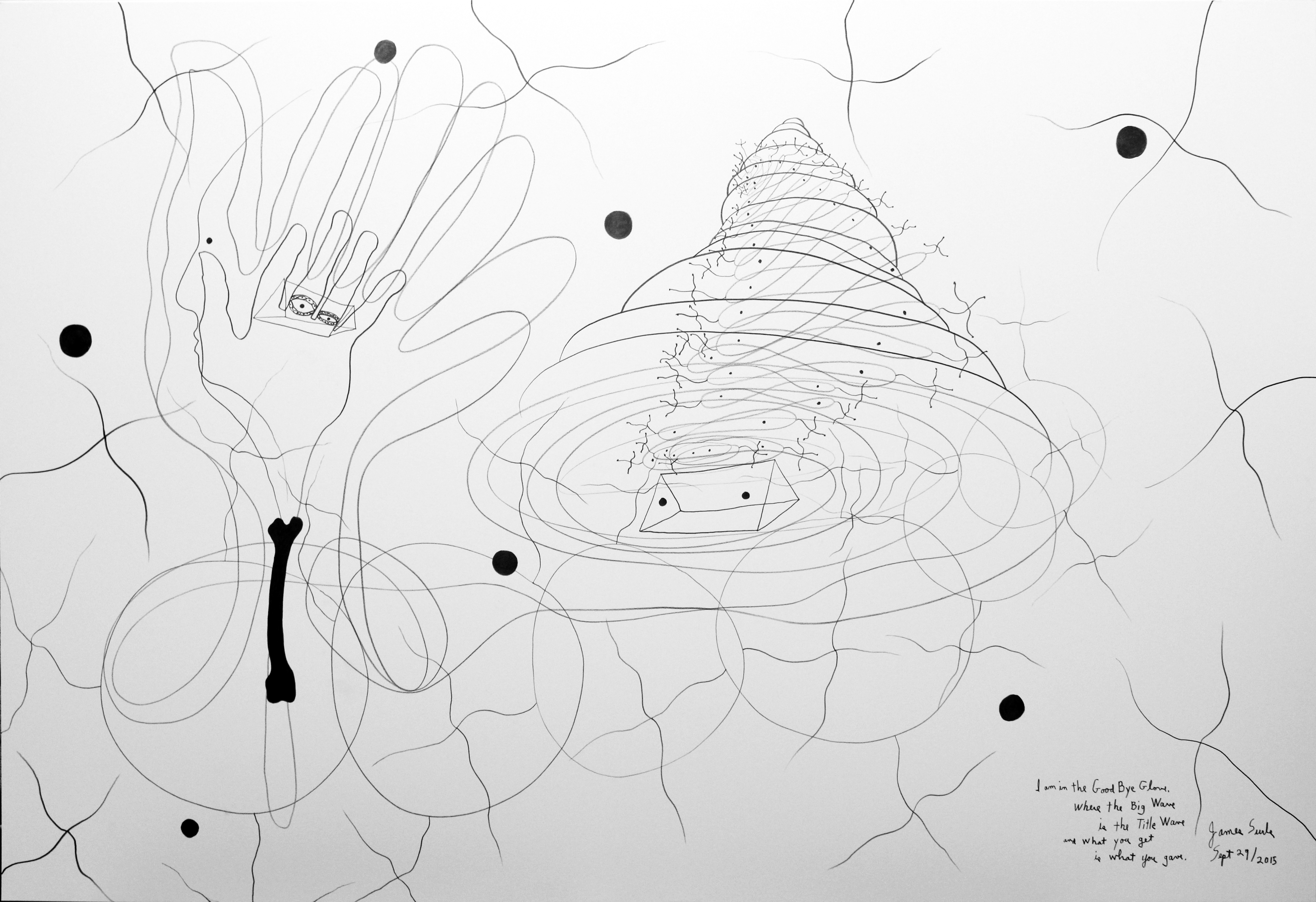 James Surls, I am the Good Bye Glove, Where the Big Wave is the Title Wave and what you get is what you gave, 2015, graphite on 4-ply.

Environmental destruction, homelessness, aging, and death are some of the loaded subjects currently on the walls of Kirk Hopper Fine Art in Dallas for a show titled Slipstream. Guest curator Susie Kalil, the longtime Texas art writer, chose complex works by ten artists in the hope that viewers might look a little deeper at issues that we often push aside. Kalil went for work that isn’t very commercial and is in some cases nearly unsellable, as a means to spark dialogue.

The show is completely composed of drawings, but that’s where the similarities stop. The artists range in age from their late 30s to late 80s, and they come from a variety of socioeconomic backgrounds and far-flung regions of the United States.

What Slipstream lacks in lightness or levity, it more than makes up for with sensitivity. The various subjects— human, animal, environment, or some combination thereof—are treated with a humanism that is tender, nuanced, and poetic. And the message of each is clear without being too heavy-handed. 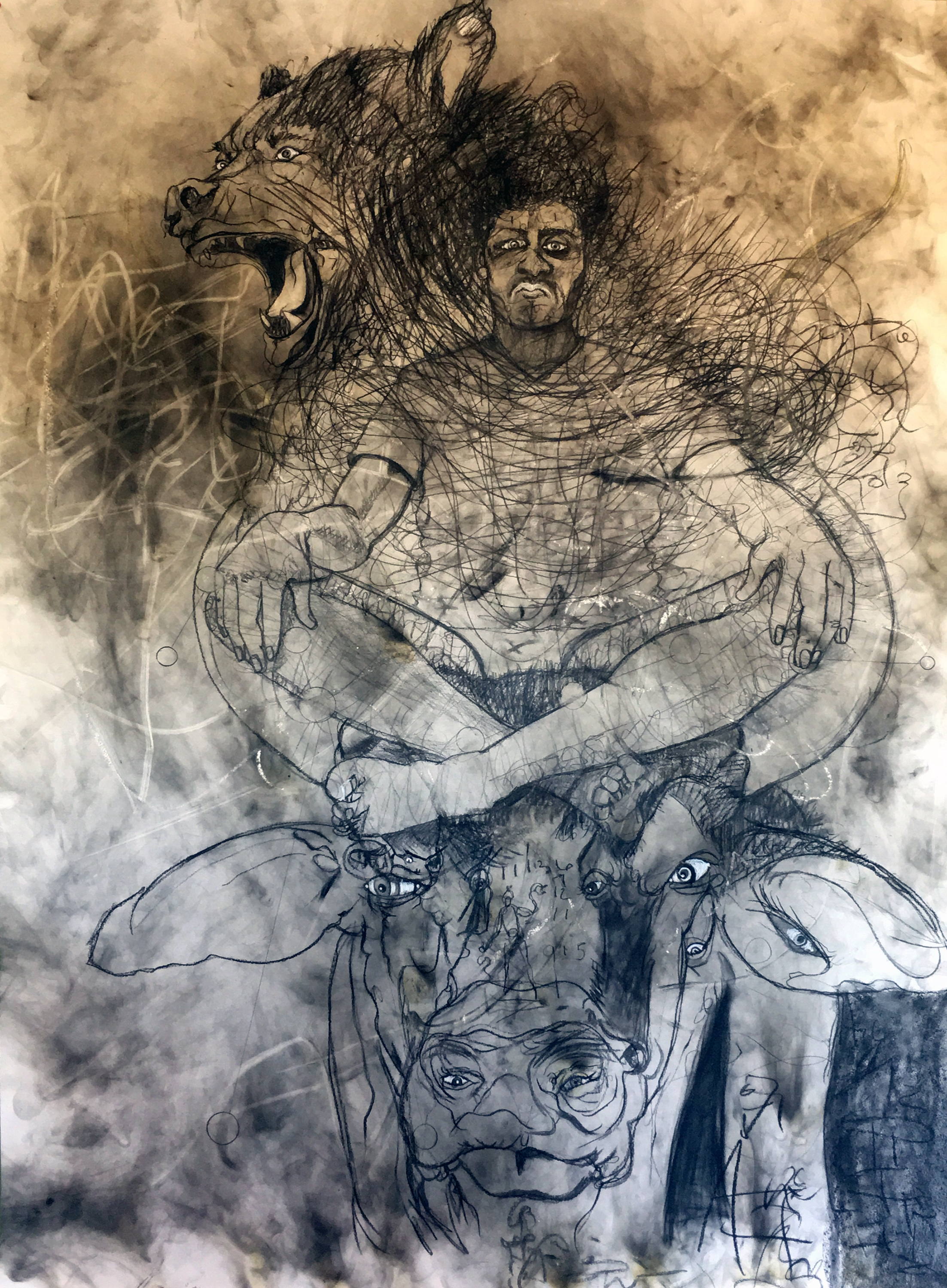 Angelbert Metoyer, The Ursidae in the Field Next to the Other Road, 2016, mixed media on paper.

Slipstream (the word and the show) acknowledges the disparate worlds we inhabit—one that’s saturated with consumer culture, acts of terror, and bad news, and the other that reacts against such decadence and corruption with grace, empathy, and even community. Kalil articulates her ambition for this show in a catalog essay: the aim of Slipstream is not just to express disenchantment with current culture, but to frame it as a “last-ditch effort to restore the mythic and spiritual aspects of life itself… . The message of their drawings, if properly assimilated, has the potential to reconfigure our emotional, physical, and spiritual orientation in the world.”

A highlight of the show is 83-year-old Mary Jenewein’s series of landscapes of homeless encampments. Her best piece—a large-scale drawing with collaged figures that faces the entrance to the gallery—depicts a scene under a freeway bridge. (This piece was also the centerpiece of her show at Houston’s Station Museum last year.) The underbelly of the bridge stretches into infinity, and the figures stretch with it—it’s unclear where the encampment ends or how many people are gathered there. As a reflection of the unrelenting plight of the homeless in parts of the country, the work suggests an inescapable inertia for these people when intervention never happens.

The drawing is especially beautiful (and haunting) due to its carefully tended details. Jenewein takes great care in rendering heaps of trash, graffiti, prowling dogs, and shopping carts overflowing with personal belongings. 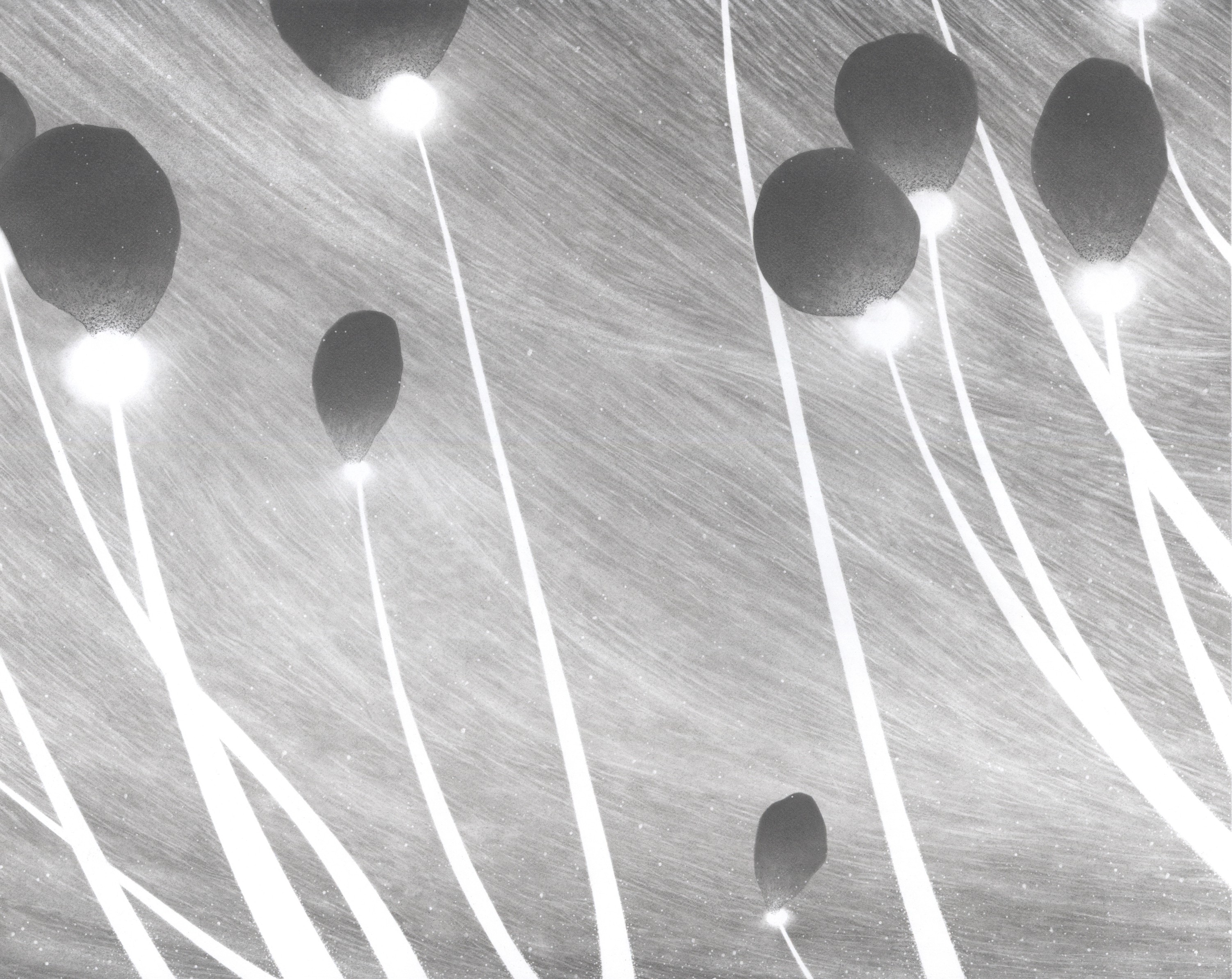 In contrast to Jenewein’s realism is the ethereal, almost gauzy quality of Jorge Alegría’s graphite-on-paper drawings. Alegría imagines our future with sparse dystopian imagery. His sci-fi work titled The War of the Angels references current-day issues of good versus evil: ISIS and 9-11. And he takes inspiration from biblical allegory. The work is airy and belies its foreboding imagery. 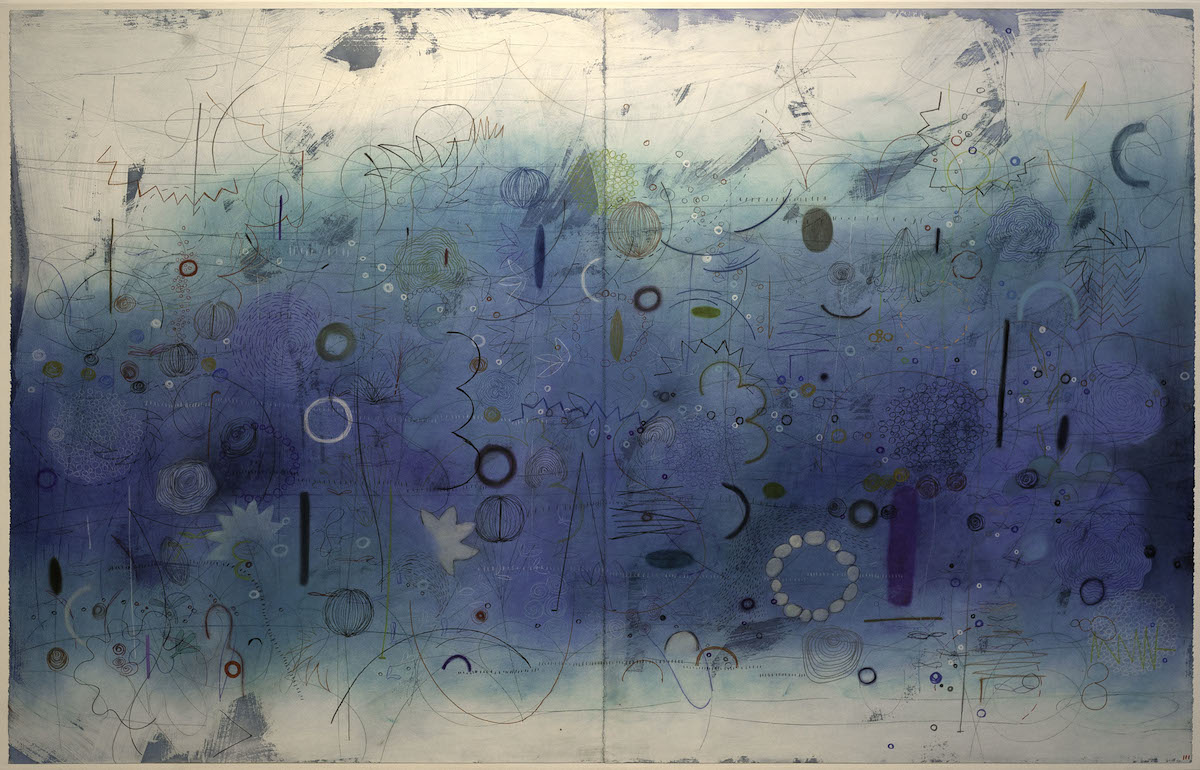 Emmi Whitehorse’s oil and chalk drawings are saturated with bold colors and abstract marks that evoke nature. Whitehorse draws on her Navajo heritage, a life growing up on a sheep farm, and her experience of connecting with the earth. The work isn’t overly complicated; the viewer can read Whitehorse’s cozy enmeshment with the natural world, and just taking it in can inspire a kind of sympathetic calm and reassurance.

The most explicitly sad work in the show is Lynn Randolph’s series of patients on their deathbeds at M.D. Anderson Cancer Center. Randolph grapples with what it means to depart from this world surrounded by machinery and uniformed medical staff. These drawings are not grotesque or exploitive. Rather, they’re portraits that give the viewer a quiet (albeit voyeuristic) journey into these patient’s private lives in order to contemplate and honor them, and the artist uses fantasy elements to soothe the way. 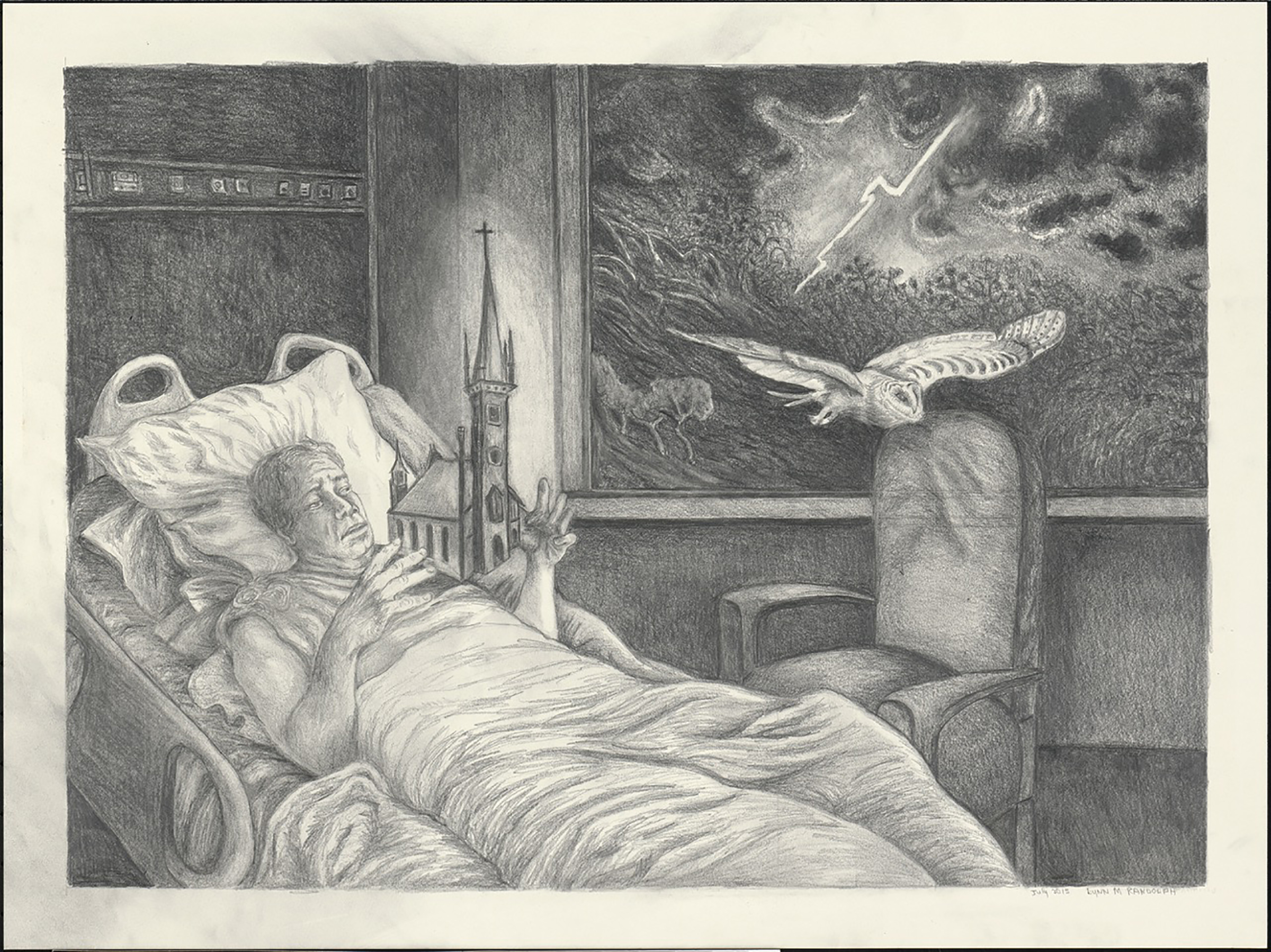 In one, called Her Soul’s Visit, a swan flaps its wings at the bedside while the patient looks on. The backdrop of the hospital room has turned into a landscape of vines. In another, the cosmos swirls above the patient’s head while angels hover over either shoulder. Flora and fauna make their way into almost every one of the portraits. Here sterile hospital rooms transcend their intended use by a long shot.

In Slipstream, the artists draw from their own lived experiences— often sad, raw, and intimate—and expose anxieties about the world around them. They’re not afraid to confront and even celebrate struggle or discomfort. They use the mark in a profound way.