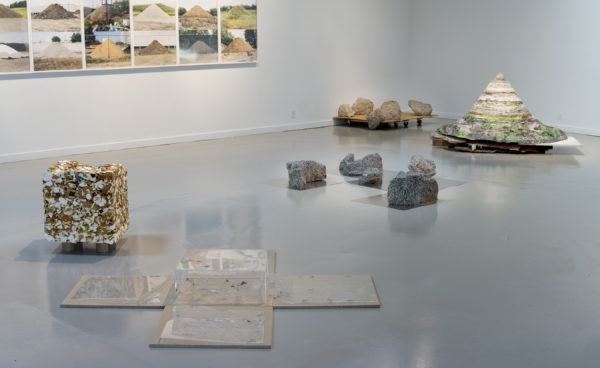 I like gallery shows that get deep enough into an artist’s practice to show their ideas getting traction and to unearth some of the broader questions that drive their work. If you missed Bryan Florentin’s recent show in Dallas, Accretion/Churn, which nicely filled Kirk Hopper’s large Deep Ellum space, it’s a cross-section of the artist’s photography-based but multi-dimensional practice. The works here seem to come from a couple of different series, but all harbor questions about the relationship between photography and architecture, as well as Enlightenment notions embedded in the organization of space.  And I think it’s worth offering some belated thoughts on.

There’s plenty of aesthetic cohesion throughout the show — the yummy mingling of gallery frames, glass and wood furniture, with jagged hunks of concrete and torn paper — and it follows an established aesthetic in exhibition displays. But I was originally unsure about what seemed like two or three unrelated investigations.

The show is anchored by photographic musings on mounded earth and other scenes from construction and demolition sites. There are also some related found and constructed objects, and a few works that deal with art history and early photographic theory. 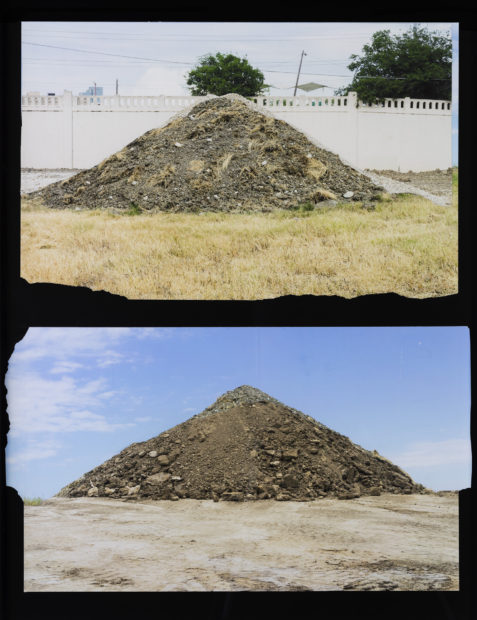 The construction-site earthworks of Temporary Landscapes are all shot center-frame in a way that recalls Bernd and Hilla Becher’s typographies of industrial landscapes. Chinks in the façade of the cityscape are explored by documenting the raw(er) materials of construction, before or after their life as architecture. These are peeps into either end of a building, just before and just after. As temporary landscapes they’re unmonumental, unintentionally aesthetic. I’m trying to see the poetry or metonymic potential in these embryos of buildings. In fact, many of these piles are stillborn, grass-covered, and forgotten. What I think Florentin is really up to is wrenching them totally out of their fabric and connecting them to some prehistoric impulse halfway between nature and culture. 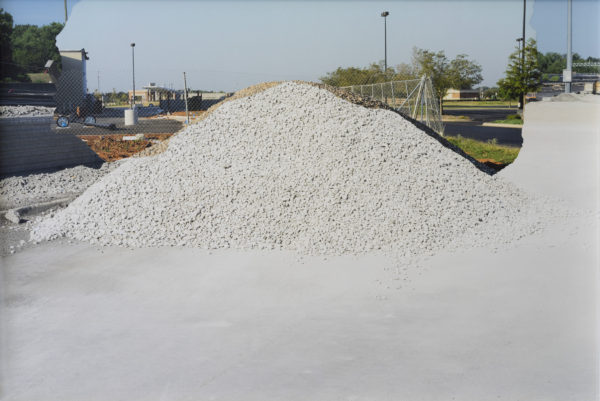 The Bechers’ work on water towers, on the one hand, gets as close as photography can to isolating the essential form of its subject. Florentin doesn’t aim for that objective of a position. There’s more light and happenstance coloring his images. The mounds themselves disappear into echoes while equally ubiquitous and unplaceable chain-link fences, cones, weeds and curbs dance around the periphery. What the artist holds still and what’s allowed to move or change sets up what he hopes to make visible. It was the same for Mondrian, or Mendel for that matter. Here, Florentin opens up to us the syntax of the city. 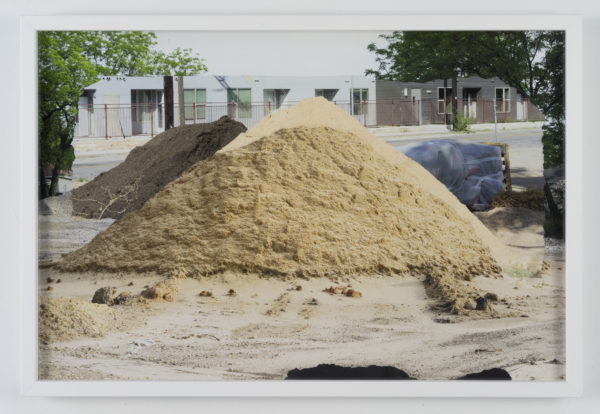 Some of the most successful pieces on view are sneaky photomontages that jam together two or more mound images. One mound will wear the silhouette of another like a jacket, the blue sky of one image crashing into the color space of another. They somehow augment each other and feel hyperreal, even though the seam between them is hand-torn and obvious.

In the three title pieces, Accretion, Accretion II, and Vitrine Form, Florentin turns his attention to the piles of debris accumulated during his own studio projects, the stuff before and after it’s assembled into communication. “Accretion” generally refers to geologic or planetary timescales; here it’s shrunk down to that of the studio. Scrap prints, packaging and shipping material are transformed in a couple of ways, by either flattening volumes or volumizing paper. The title piece is a bisected mound of collaged scraps of landscape photos, pasted onto stacked, sculpted cardboard and foam core, topped with a chunk of concrete. The illusion of a stratified pyramid of organic references is papered over the lump. Its volume is entirely built up out of two-dimensional shapes plus that bit of thickness usually unaccounted for. This thickness — the thickness of a page, a pamphlet, a book — is what accretes. 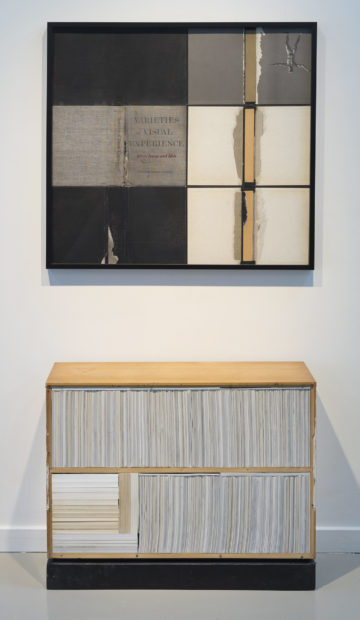 Florentin also deals with this in another work. Scene in a Library (After Talbot) riffs on an early photographic experiment by filling a small bookcase with printed material, page-side out, un-readable — just a volume of material showing only its dimensions and its matter. Though there are snippets of conversations on photography’s role in Enlightenment thinking: as objective, as archive, as producer of universal knowledge. What I’m left with is the carcass of discourse.

Inversely, Florentin flattens cubes back into their constituent planes in the works Binding (Exposure Guide), a framed grid of hardback book covers, and Vitrine Form, the clear plastic cube used to give shape to his sedimentary chunk of more photo scraps.

Accretion/Churn references two different flavors of flux: slow and imperceptible/fast and felt. But Florentin’s eye, like many current thinkers, wants to unfix hard distintions between human activity and earth’s own projects: i.e. nature and culture, finding the ‘geo’logic in the logic of urban infrastructure, and vice-versa. Here’s one more artist toiling away at braiding together the world inside and outside of the studio. The world on the page and the world of the page.