Trenton Doyle Hancock’s Skin & Bones at the Contemporary Arts Museum Houston has been up for a while. Why write about it now? Because it’s frightening.

I first encountered Hancock when he gave a lecture at the University of Houston, where he came off as an honest, awkward, and articulate comic book nerd. He was confident, and determined to hammer his ideas into ink or canvas, no matter how large or absurd. He said something then that struck me like a 2×4 to the kneecap: “If you make a piece of art and are immediately frightened by it, you are getting somewhere.” This idea resonated through Skin & Bones. 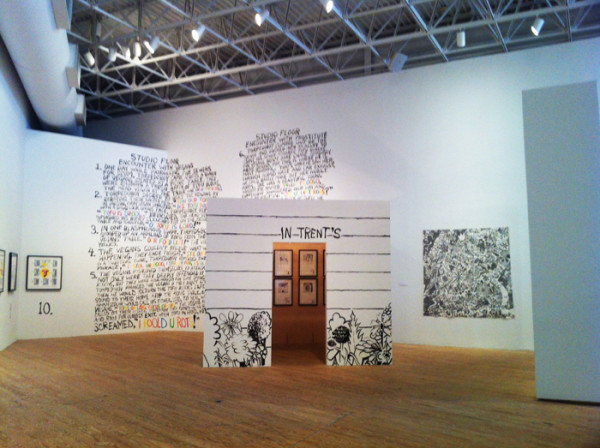 Walking into the show is like getting slapped in the face with a hive of bees: so much visual information it might cause an allergic reaction. The gallery is so dense with video, painting, and works on paper that you can’t really approach it; the exhibition approaches you. The CAMH’s press release said it “features more than two hundred works of art as well as a collection of the artist’s notebooks, sketchbooks, and studies.” which gave me the idea that there would be tons of careful planning in evidence, mock-ups for large manicured drawings, like what could be found in my own studio or those of my friends. What I found was way more chaotic, a straight up Charlie Foxtrot. The whole exhibition looked as if whatever was not tied up elsewhere was dumped on the floor of the CAM and put under museum glass. I felt duped, but in a good way. 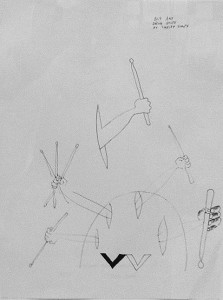 Nestled amongst a cluster of thirty or so other drawings, Drum Man is a small, primitive pencil scribble on printer paper that includes five floating human limbs holding drum sticks with “buy any drum stuff at thrift shops” written hastily in the upper right corner. It’s not particularly well executed and it is easily the dumbest drawing in the entire show, but its inclusion is important: it informs the humor and aesthetic of other very dumb, yet very funny drawings like Pizza Inn: Only Mean Animals Die for Our Meat, We Promise and Torpedo Boy Peeing. 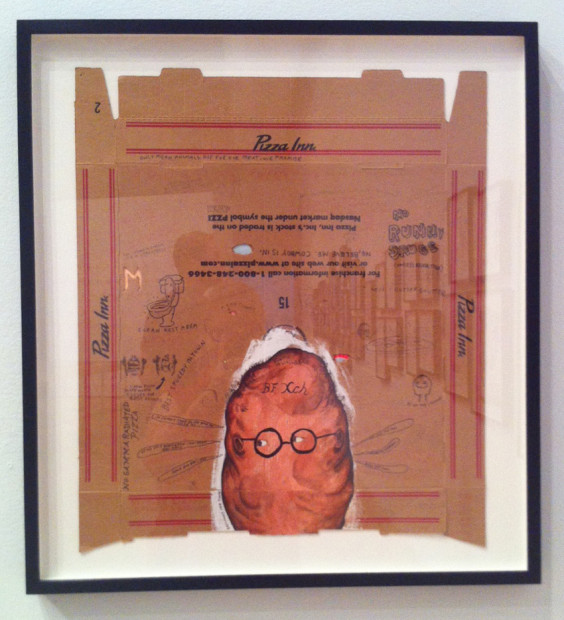 Pizza Inn: Only Mean Animals Die for Our Meat, We Promise

Pizza Inn: Only Mean Animals Die for Our Meat, We Promise is a beautifully framed, grease-stained pizza box, decorated with several toilet doodles, characters, and complaints, which form a halo around a spud-like, bespectacled face. This drawing was made on a gross pizza box and saved for 16 years. This absurdity is, for me, what makes this piece breathtaking. 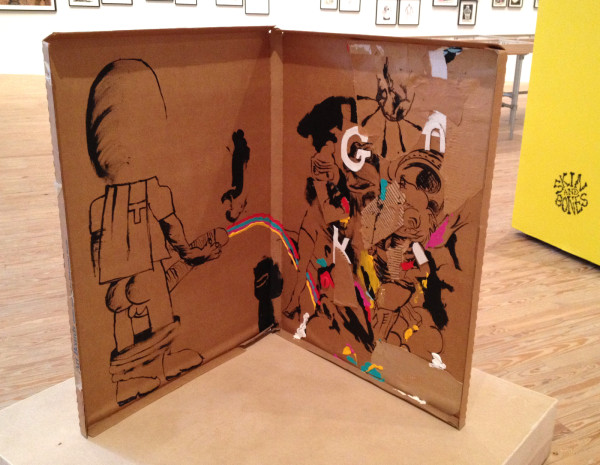 Placing Torpedo Boy Peeing at the front and center of the exhibition is brilliant. A box labeled “Art Boards” stand on a plinth, open to display a primitive drawing of Torpedo Boy (and his mythically large baloney pony) showering a rainbow of radioactive piss onto a pile of glued-on studio garbage. It is crude enough to make blue-hairs cringe and mesmerize middle school boys. 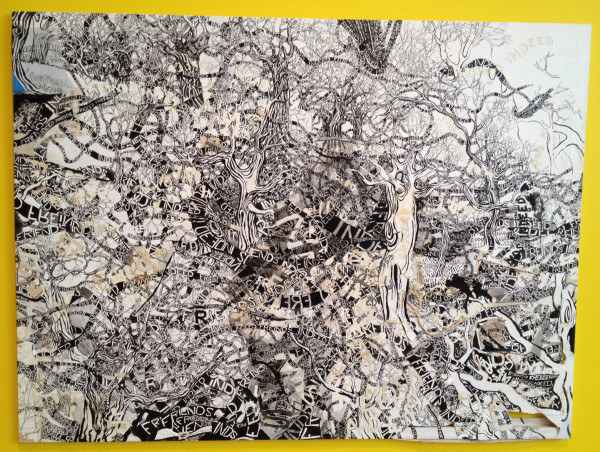 I gravitate towards thoughtful, detailed, and larger artwork, and I found these three pieces unnerving. They go against everything I typically find to be beautiful and intelligent, but, in the context of this exhibition, they are playful and extremely smart. They look like they were dug out of the darkest depths of Hancock’s studio to reveal a more raw and condensed version of the humor that fuels Hancock’s monumental works of layered paper and lore, like Friends Indeed. These dumb and seemingly insignificant drawings are the glue that holds the worlds of his greatest works together.

Skin and Bones is an opportunity to see a complete goofball and romantic fall brutally in love with something as fickle as drawing, over and over and over again. No two drawings are the same. No total mastery of skill is ever obtained. Like Wile E. Coyote after The Road Runner, the chase is what keeps Hancock in the running as one of America’s most prolific artists.

I agree — I was totally overwhelmed by the sheer number of pieces and installations and really not able to focus on individual pieces.

This show was absolutely superb. I felt the only extraneous element was the video installation room. Everything else served a very important purpose.

I’ve seen Hancock’s art since moving to Houston in 2001, but never more than a couple of pieces at a time, and typically a mound-related work. This is the first time I’ve ever seen this much of his work at once. It helped me finally piece together his message. I can’t imagine a show with any single piece missing (save the videos).

But isn’t Hancock saying “Wait!”? Isn’t he saying this kind of thing is normal? Isn’t this what people actually are? What they actually do? So why are we ashamed of it?

He also has some images of ape-people, one being a detailed formal-style seated family portrait. How much more explicit can you get? Humans are animals. Just more formal. So why deny it?

I feel he’s also saying it’s futile, harmful and even abusive to form groups of the like-minded to help us deny our common (filthy) humanity, to devise cleansing-myths, or to develop idealizations of humans as heroes.

For example, he describes conflicts with vegans, white-supremacists, and frat-boys. These are all sub-groups who attempt to deny their animal nature by trying to create artificial divisions and cleansing rituals, to launder their world of the unsophistication they see in others, and yet manage to create behavior so shameful it goes off the chart.

In other words, by seeking to avoid shame, or to eliminate it, such people only concentrate it among themselves, and even manage to create more of it. By trying to be less an animal — or to make everyone else less so — humans only become more inhuman. What a powerful 21st-century message.

If I were a Bible scholar, I’d try to make a connection between his drawings and the Garden of Eden, with a nod to the Tower of Babel. Maybe I’ll give it a shot in my next life.

And then Torpedo Boy. This guy is as anti-superhero as you can get. What better way to skewer the idea of hero worship — human-crafted images of humanity-as-should-be — than by creating a hero in the image of humanity-as-is, undies and all.

This is an excellent, amazing show. It displays Hancock’s fantastic vision, showcases his skillful hand, and through its complexity and depth, brings his motivations into sharp focus.

Your response is on point!

This comment is more well written and worth reading than the above review.