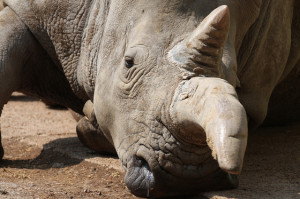 A DFW-based art and antiquities appraiser yesterday pleaded guilty to the U.S Department of Justice for trafficking in illegal wildlife horns and ivory. Ning Qiu, 43, of Frisco, is charged with a conspiracy to smuggle rhino horns and elephant ivory valued at approximately $1-3 million; as part of an international smuggling ring he moved the contraband from the U.S. to China. From there these goods were sold to various Asian markets where consumers value the animal parts as superstitious talismans for good health.

Reportedly, Qiu had been a professional art appraiser for seven years and had at one point worked in an unnamed Dallas art auction house. Qiu used his antiques connections to buy goods made from horn and ivory, and scoured the U.S. for more sources, which may have included hunting trophies. To ship them across international lines, he hid the goods inside vases and falsified shipping documents.

Elephant and rhino populations across their natural habitats in Africa have plummeted via poaching due to this illegal trade. In recent years and despite international trade bans, demand for their parts has soared in newly affluent Asian markets.

According to the Department of Justice, “Qiu was identified as part of ‘Operation Crash’ – a nationwide effort led by the USFWS [U.S. Fish & Wildlife Service] and the Justice Department to investigate and prosecute those involved in the black market trade of rhinoceros horns and other protected species.”

As part of Qiu’s plea deal for cooperating with authorities by giving them information about the smuggling operation, the D.O.J. states that “…the government agrees to recommend to the sentencing judge that Qiu serve a 25-month prison sentence and pay a $150,000 fine.” His sentencing date has yet to be determined.

How to Unmake a Museum: North Texas on...