A rose is a rose is a . . .billboard? Stein texts to caption Houston freeways this summer 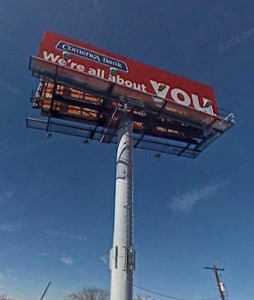 For the next six weeks, 10 billboards along I-10 between Beaumont and Brookshire will bear quotes by modern author Gertrude Stein. Some, like “in the morning there is meaning” and “in the evening there is feeling,” seem apt for the daily commute, but for “How sweet are suns and suns. And the season. The sea or the season, and the roads” (in Katy) you’d better be stuck in traffic.

In addition, the project, titled it is so, is it so, by artist Eve Fowler, will place libraries of modernist classics by contemporaries of Stein, such as Virginia Woolf, Oscar Wilde, Thomas Mann, Marcel Proust, Henry James, Truman Capote, and Anne Carson in roadside venues like Stuckey’s in Anahuac, and the Gator Junction BBQ (24620 Interstate 10, Wallisville), as well as arty hangouts like Inversion Coffee in Montrose and Bohemeo’s cafe.

Fowler’s billboards are only one spoke in a big wheel: her Houston project is the fourth chapter in larger The Manifest Destiny Billboard Project, which will place 100 boards by 10 artists along Interstate 10 between California and Florida by Spring 2015, conceived by artist Zoe Crosher, organized by LAND (Los Angeles Nomadic Division), and curated by LAND’s star curator/director Shamim Momin.

Click on the map image for the interactive Google map.