by Kelly Klaasmeyer May 12, 2012
FacebookTwitterEmail 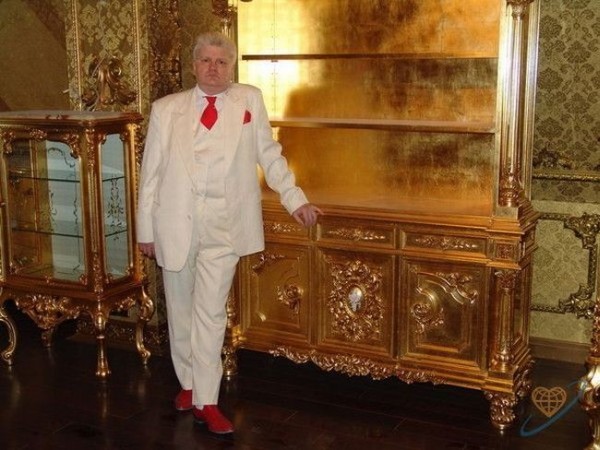 The image above and those below were pasted in a document that opened with the following (loosely translated) text:

“To all unmarried ones who would like to spend their life by my side and within all the beauties of my home. Please look below at all the magic of my home that I have decorated with taste, perhaps just for YOU. Don Milisav Juan Gonzales Brzi, Contact: +33-#########″

Apparently Milisav’s bride hunt became something of a meme in the BCS – Bosnian/Croatian/Serbian – speaking world a few years back, the document was emailed from person to person and wound up on some blogs.  I haven’t seen it crop up on the English-speaking web however and I thought I’d share. If you like Daniela Rossell’s photo series Ricas y Famosas, which features the super rich of Mexico posing in their over-the-top interiors, you’ll love Milisav. And thanks to the Houston ex-Yugoslav community for sharing this gem with me. 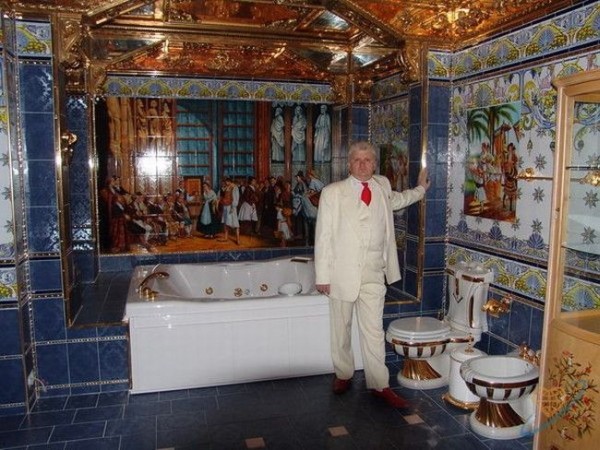 Milisav in his throne room…

Milisav in his boudoir. Remember folks, you can never have too much gold! 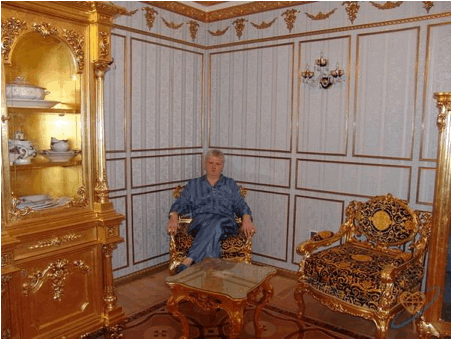 No, really, you can NEVER have too much gold. 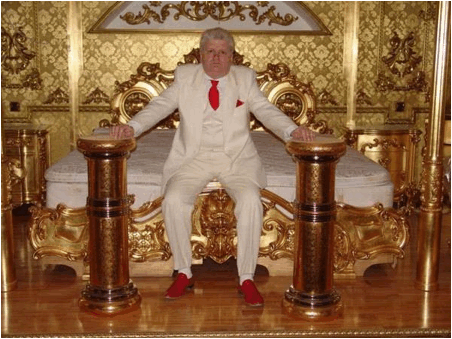 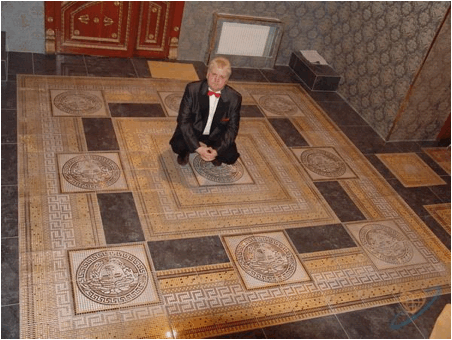 Tile too, you can never have too much tile. 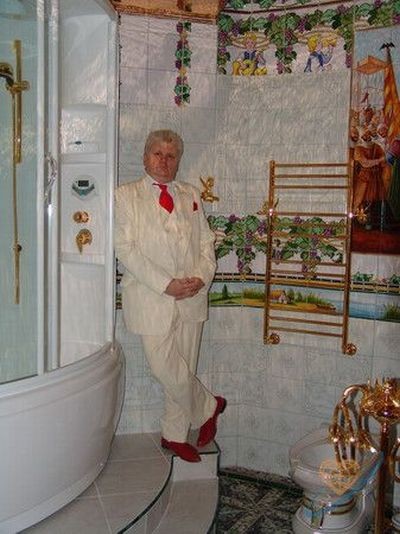 Oooo, is that tile? 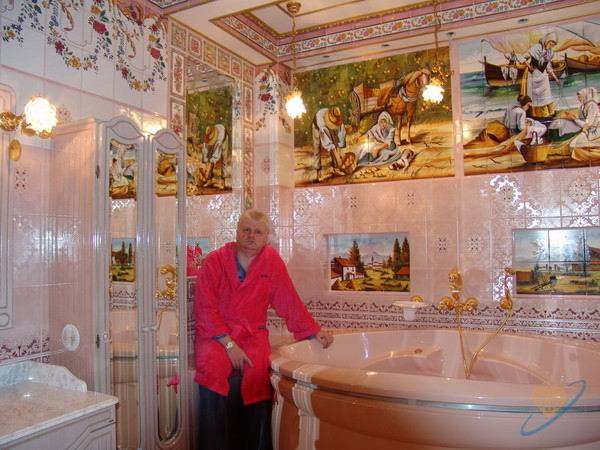 Yeah, that’s tile alright. (But is that his mom’s robe?) 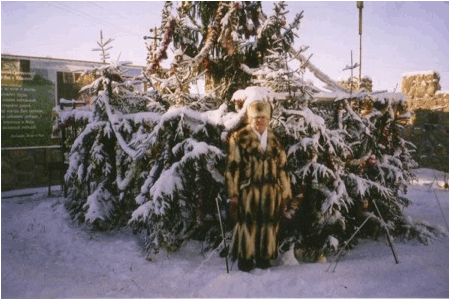 Fur, never too much fur. Especially when it’s time to hibernate. 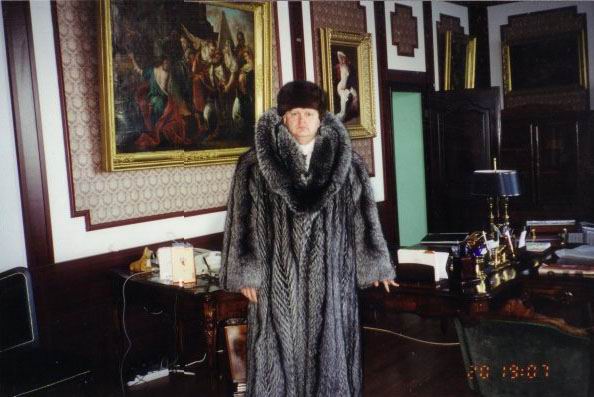 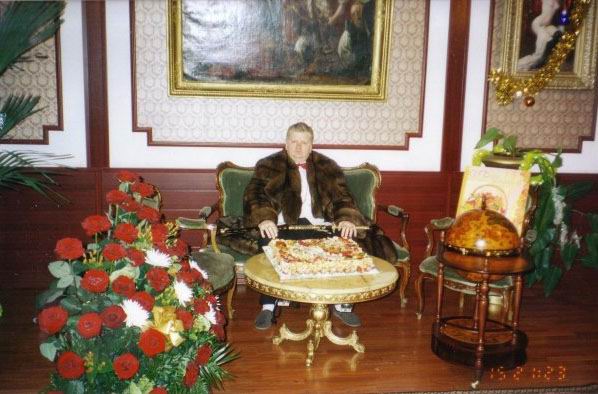 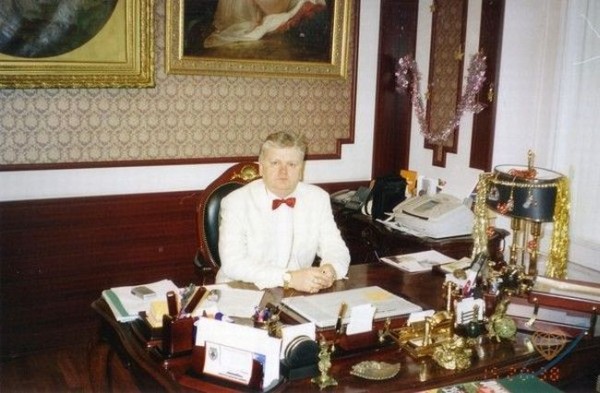 Milisav shows his European disdain for the insipid American convention of smiling pleasantly in photographs. 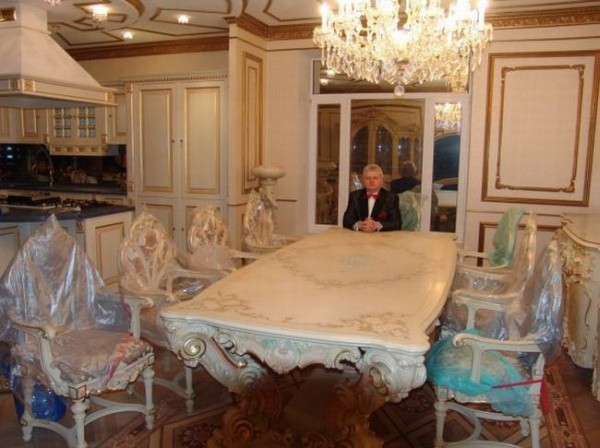 Nope, you sure don’t want to remove that plastic – EVER. 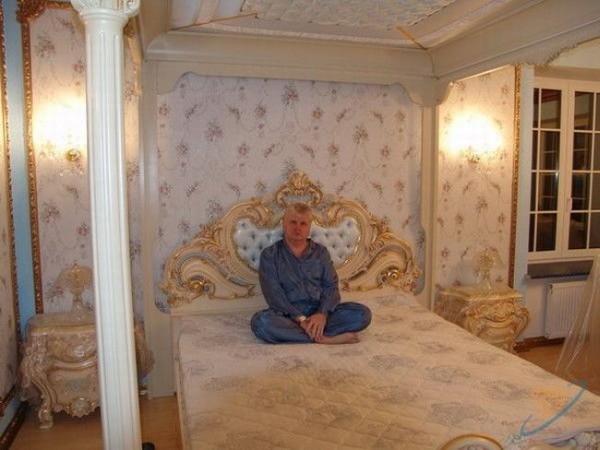 Milisav and his “come hither” look. 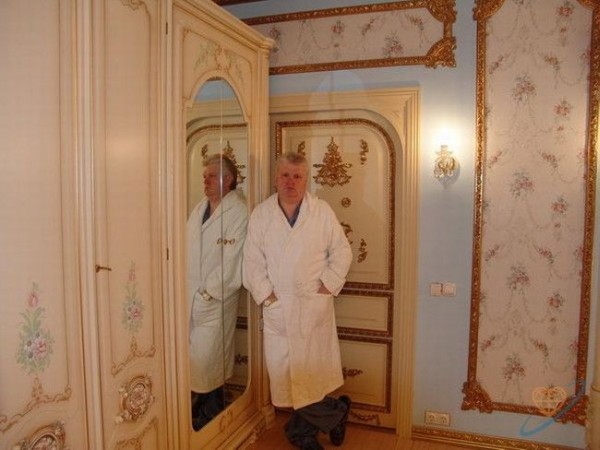 Taking another stab at the “come hither” thing… 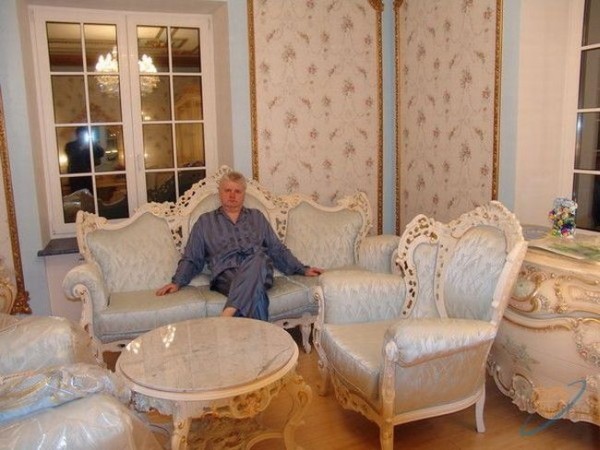 Check out the photographer reflected in the mirror. I think it’s his mom. “Oh, Milisav, you look so handsome, your home is any girl’s dream!” Especially that Barbie Dream House furniture… 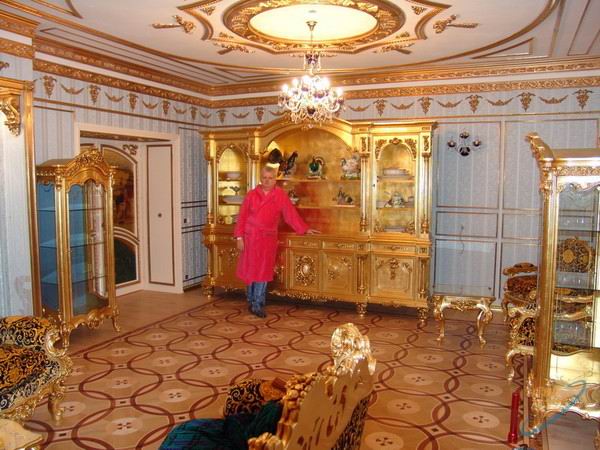 I sense a Sun King complex…

Hilarious! Gold might be better melted down and sold than as we see it in these photos. LOL!

that last set of furnishings should be on display at the Getty Museum….

I think my first words to him would be “This is wonderful, but the gold has to go.”

Do you notice how in the second to last photo, the plaid robe that he wears in the last photo is bunched up on the couch in the foreground? I want to hear the conversation where he decided to change robes, and why.

The plastic on the chairs is just in case he has to shoot someone at dinner.

That’s it! I knew there was a reason! And there’s probably trap door in the tile foyer with a shark tank under it so he can dispose of that meddlesome James Bond…

That explains the tile. Tile has seams. Best for hiding trap doors.

It is easy to wash the blood from tile too.

If you think this is in poor taste, the words gaudy, ostentatious and so on come to mind. If you like it the words lavish and luxurious. Or if both ostentatiously lavish, how about that? I personally find the design elements imposing and attractive, but to live in, euch.

… the interior is so marvelous!

I think that house is on Ocean Parkway and Ave T.

Sorry, not Serbian, but Russian most probably. But, since everyone mistakes Serbia for Siberia which is half a world away, no biggie.

why Russian? Milisav and Brzi are Serbian names.

This dude is definitely Serbian. When was the last time Serbia got confused for Siberia?

+33 should be a French number… so quite bizarre

That comfy lived-in look will get ’em every time.

That empty-shelf look is part of the plea:

“The world is my oyster but where is the pearl?”

And then it could be shots for an auction catalogue.

yawhere are the towels in the bathrooms, toilet paper and soap???LOL

People who never smile, probably have wonky teeth. I bet he could bite a hog through a fence, what do ya think?

No one has mentioned the tinsel !!!

the kitchen seems a bit weak.

The word is “TRAWLS” not “TROLLS”.

Too much metal and wood. Needs more air and water. Feng shui hell

No windows? where IS this place? underground??

Finding hard to understand what’s going inside this man’s mind.

I like how he has all that gold and fur, but can’t afford a digital camera to take these pictures with. How many megapixels do you think this is?

I think really his strongest feature is the chins that protectively prop up his frown. You can never have enough chins.

[…] Jessica Birkett|Ladies and fellas, the online dating pool has just found a shark. This found dating profile, previously only circulated through Eastern Europe, depicts this Serbian Prince of a […]

Ummm. where are the sheets?
Two beds with no sheets on them. I think this might be a furniture warehouse.

Donald Trump has a soulmate

Um, may I get his phone number?

This guy thinks this stuff is going to get him a bride? She may have to be really dumb AND stupid. All this gaud; where is there a good contractor when you need one? This all has to go. Let’s put it this way. His furnishings didn’t do a thing for me. Neither did his mannerisms. If this is what’s out there, I’m glad I’m still single. EEEWWwww!!!

What… No cock shot?! I bet he has an absolutely gorgeous penis.

Yes, and made of SOLID GOLD of course. Hahaha

Somewhere, Donald Trump is looking at these photos and seriously considering a sex change! He’s finally met his soul mate in taste.

This reminds of Christopher Walken as The Continental

No sheets on the bed??

yeah i wonder too

No sheets. Most of the shelving is empty. Not a single personal possession. All furniture is wrapped, except where he pulled it off to pose (see bunched up behind furniture). I think this is a model home, or a home for sale that he snuck in to have photos shot. The change of clothing is to try and fool the masses.

One of the rare instances when a reality tv show DOES need to step in!

Just to think how much famine we could stop with all this fortune… maybe seeing some children being saved by his “fortune” would bring a smile to his face. Much less worries for him…

You may not be avare but zis man viz ze excellent taste ist ze greatest collector of art in ze vurlt! Have you ever zeen a man win an auction at Christie’s who ist talking on ze phone? Zis is ze man on ze phone! He ist ze main tastemaker in ze art vurlt unt he izt unt starmaker! Ever vonder vy ze Jeff Koons ist so famous? Zere ist your anzer. He makes unt he breaks ze artists! He ist vy ze art vurlt is vat it is! Ze rumor ist zat he haz zo much money zat he buyz ze vork of ze contemporary artizts even zo he doezn’t really like it unt donatz it zecretly to ze museums unt to hiz political friendz unt zat ven you zee ten men at ze Christies auction on ze phone zey are all talking to him unt he has zem on conference call zo zat zey can make it look like zere ist a lot of interest and zey can bid ze price up on ze art.