Care House, an invitation only installation 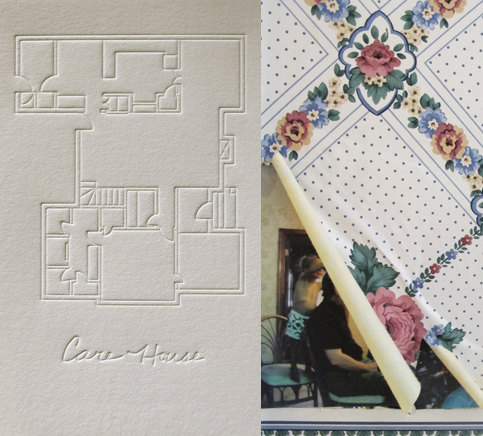 Every so often we experience an artwork that reminds us of what art can be. A total artwork—- one which transforms or activates the space it is in, and therefore acknowledges its site; explores some sense of materiality to unravel the materials in which it evolved from; is deeply personal to the viewer, but also shakes something up in the viewer in a way the allows us to question our relationships, movements, and very existence.

For me, Cloudnet by Cecilia Vicuna at DiverseWorks in 1998 was one such work, as well as Cornelia Parker’s 1997 artwork Mass, at ArtPace. These works were striking and formative in my own redefinition of my artwork and myself. I’ve heard others recall that Maryanne Amacher’s sound installations and Ann Hamilton’s installations are also such works. 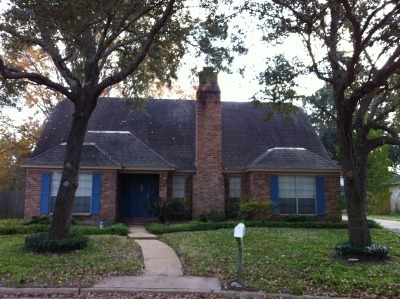 A recent work by Carrie Schneider, an emerging Houston-based artist, I believe could be added to this list of nameless, striking, total artworks. Care House was created by Carrie Schneider this year. It is a private installation recalling her mother’s recent passing to cancer, installed in the very house in which she lived and the artist grew up in. The artist describes it as:

Care House is a memorial to my mom and the house that became her.  Sound, video, and material interventions consider the shifting roles of caregiving and caretaking,  emptying a home, and parting with a parent.

I received a personal invitation to this installation by the artist, as did a few others who know her. The installation was not open to the public. It took place in the home in which Schneider grew up in in Katy, Texas about 30 minutes from Houston. This home was also where her mother lived by herself until her recent death last year. Since her mother’s death last year, Schneider has been going into the home and creating art that recalls different spaces and memories. The work seems to be about framing these memories of the home for the visitor, but more importantly a sort of ritualistic way of recalling, activating and healing for the artist.

Visitors are given an access code and enter the house alone through the back door. After about a 30 minute drive, I pulled into the driveway as if it were my own, went to the back of the house, walked past the wind chimes (in which the artist hung as an offering to her mother) on the back porch, and entered the correct access code to let myself in through the back door. I enter the home as if it were my own. To left in the back entry way was a grouping of various hand drawn floor plans of the home, and an ironing board. 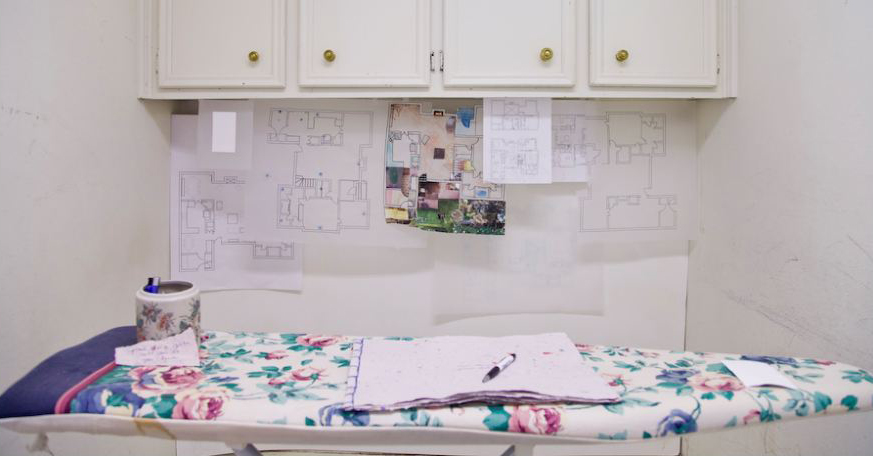 I walked a few steps and took a seat at the kitchen table in where a CD player was placed. I heard what seemed to be abstracted, ambient sounds and more precisely the movement of a person, but no dialogue. There I sat in this two-story house by myself at the kitchen table in a home that wasn’t mine. Coming from what seems to be the family or living room, one hears the sound of a family opening Christmas presents and in the living room we see that there is a home video showing this. Sitting on the couch watching the video alone, I feel nostalgia for memories I’ve never experienced, in a home I’ve never lived in.

There are many special moments in this installation, such as the life-sized video projection Care, in which the artist is seen climbing into a bed, laying down, and rising up, while a double of the artist sits in a chair next to the bed seemingly calming, soothing herself. The images are in motion and seem to be traces of the artist. The video is projected onto a bedroom wall in way that you feel the artist and the bed are actually there. 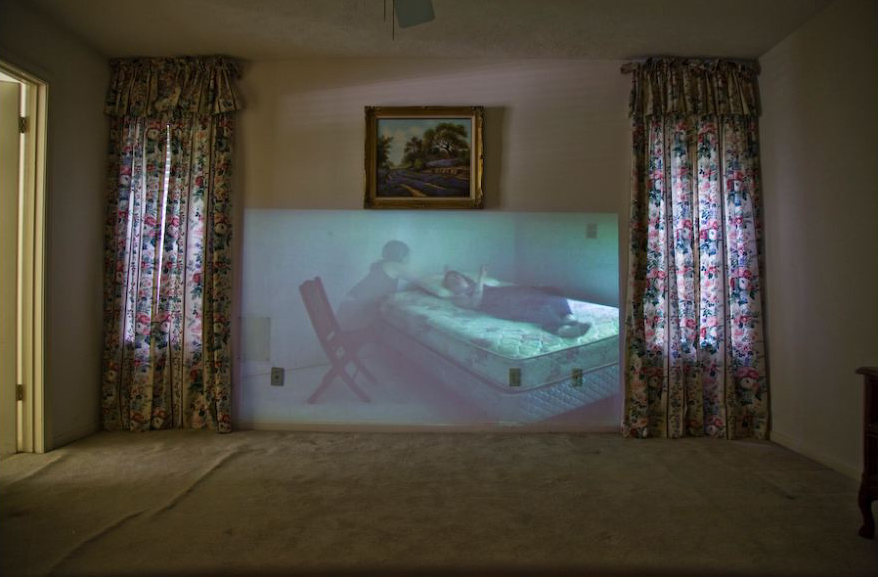 There is also a video in a small room which seems to be a closet area, in which the artist has projected photos of her mother, then moved her body in the exact same pose as her mother and placed herself on top of the photo projections. It often takes a couple of tries. These transpositions are then documented through video. The bathroom door is ajar, and behind it we see medical receipts, an overwhelming amount of medicine capsules and bottles, and drafts of what seems to be an obituary. Care House is incredibly involved, and there are many other striking works.

Care House was not about creating a work of art in a formulaic, sterile art space or pitching the work to a notable curator and packing in tons of visitors drinking wine for an opening. Schneider chose not to submit a proposal to an exhibition committee. She made visitors drive all the way out to Katy and recall the memories that were embedded in her and have us relive these experiences with her. In a work deeply personal and intimate for the artist, Care House shook my core and reminded me of what art could be.

I’m having trouble getting past the whole “invitation only” and “not open to the public” aspect of this installation. I get why she decided to do that, but I don’t like the idea of someone making art that has such a limited audience – and one that the artist explicitly chooses.

the work seems to be made for the artist and her mother primarily. I understand why she might want to invite particular people to view such a personal and intimate work. She gets to decide who views it and she did.

How many people should get to see it? There are plenty of examples in which art is exhibited for some and not for others in both public and private contexts; including some works that are meant for only a single audience member.

It’s not a question of a specific number of people who should see it, but the notion that if someone wanted to experience the piece, there would be a way to do that. If it was just for her and her mom, why invite anyone at all? And just because there are plenty of examples in which art is exhibited for some and not others doesn’t mean that it’s necessarily OK or excuses someone else from doing it.

As was stated in communications and on the site, I extended invitations to those who were interested, even if I didn’t know them already. Friends of friends, medical and hospice professionals, and people with parallel experiences reached out. Once they contacted me, I provided a list of available appointments, the location, and the code. Scheduled appointments ensured that each visitor had an uninterrupted walk through and that I could reset various components between each visit. Although I spent a lot of time facilitating these visits, creeping around the suburbs and reading at the nearby gas station, they were limited because I’m a person with jobs and other projects in the city.

Also, because I’m the daughter who cares for the home, but not the person with legal power over the property, I shared as much as I was able within time restrictions and without compromising our home’s security or getting in crazy trouble.

I don’t have a solution for this, and I don’t think of Care House as social practice, but Meredith’s point of view is something I think of often in relation to social practice where the primary audience who has direct and participatory experience is often privileged over the secondary audience who view only documentation. For those who didn’t get to visit, in the coming weeks I’ll be posting a walk through video filmed by Jonathan Jindra. Although this doesn’t replicate the experience, it can extend the work beyond its closing date.

While I’m no enemy of public access to art, in this instance the total accessibility of Care House was less important than honoring my mom and her home.

Given the nature and physical circumstances of the work, it was pretty accessible. You had to ask to see it, but that doesn’t seem like a major hurdle. (Much less of a hurdle than actually finding it! Not to mention trekking out to Katy in the first place.)

to me the beauty of this piece is the exclusivity of the public, and the ephemeral experience it creates for and with the viewer. the intimate number of people invited to enter this very personal shrine, and the haunting nostalgia it creates of past people and places are why it exists better as a memory than as a place we can just pull up to and visit together this sunday.