A couple of weeks ago, two friends and I traveled to West Texas to look at art. I was once an intern at the Chinati Foundation so I’m familiar with Donald Judd and his vision in the desert town of Marfa, Texas. On our first day we went on the Chinati tour. Looking at Judd’s aluminum boxes I was particularly struck by the math of it, how they are all so perfectly aligned. Modernism never seemed so obviously synonymous with Classicism. 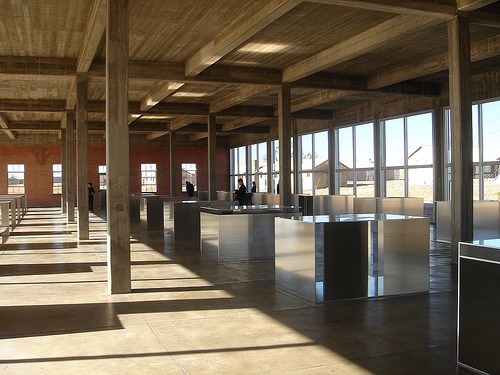 Thinking about Judd and the work at Marfa as a set of standards makes sense in relation to the exhibition Nothing Beside Remains, a group of installations set into the landscape of Marfa and organized by former Whitney curator Shamim Momin. The exhibition is part of Momin’s Los Angeles Nomadic Division (LAND), a public art initivative that commissions site-specific installations and public projects. The sprawling show of contemporary art embraces the tenets of 1970s land art, making the viewer work for the work, as well as reflects the minimalist site-specific installations that Marfa is famous for. 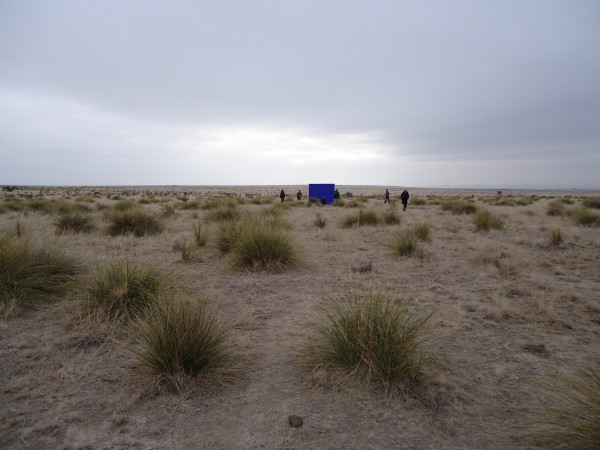 Experiencing each installation I kept thinking of screens or stage sets; set-ups that make you self-consciously aware of your immediate surroundings. New York based painter Garth Weiser created and installed a large blue rectangle in a desolate area of the desert. We drove out into the empty terrain and were greeted with a blue mass. From faraway the structure looks like Derek Jarman’s Blue blown-up. Up-close, the rich pigment has the dusty quality of an Anish Kapoor sculpture. 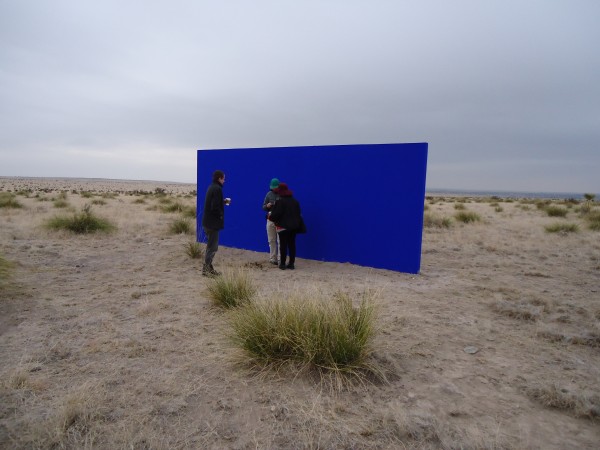 As an intern at Chinati we were required to give tours of the grounds. After a a couple of weeks, I quit paying close attention to the art and instead focused on the desert landscape as it was framed by the site-specific sculpture. Weiser told me his sculpture is intended to deteriorate over the run of the show, maybe turning into a puddle of blue. I’m more interested in it as an additive to the landscape, a screen that slices into the desert as the opacity of the blue charges everything around it–the nearby mountains, the gray winter sky. 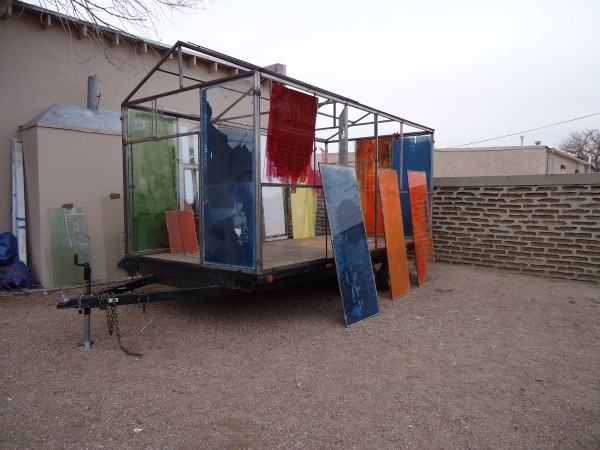 New York multi-media artist and Chinati artist-in-resident, Rob Fischer had a band of young men drive this glass trailer from New York to Marfa. I was informed  that just one glass pane broke on the trip. The young men also told me that after such a haul, they have a new relationship with the medium of glass. “Not scared of it,” they said. I think Fischer is going to be reconfiguring the trailer throughout his stay in Marfa. Glass as screens, see-through but also colored. Portable stained glass windows. Having been driven to Marfa, the piece feels less whole than the other works in the exhibition which succeed by deriving directly from their specific relationship to the space, rather than as an idea thought up in New York and placed in the landscape. 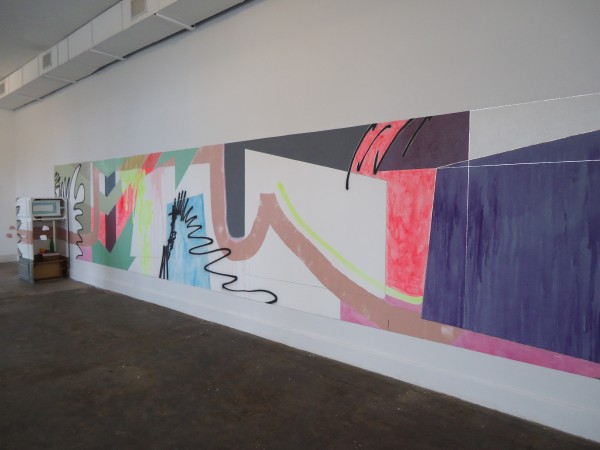 LA painter Sarah Cain took over an empty space on Main street for her painting installation that instantly made me think of  the squishy paint drips that adorn the Chamberlain sculptures across the street. Moving from painting to sculpture, cartoonish blocks of color and squiggly lines span the wall and then bleed onto the discarded furniture placed against it. 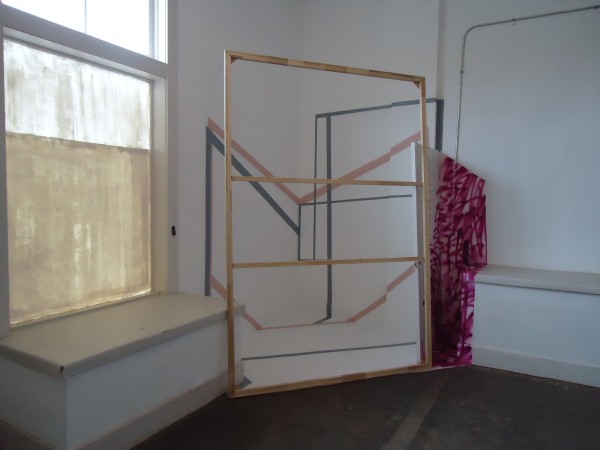 I especially liked how the installation interacts with the architecture of the empty American Legion building. I think Cain could get weirder for sure, but the tension created through the combined geometric taped sections and seemingly haphazard spray-paint felt pretty good. 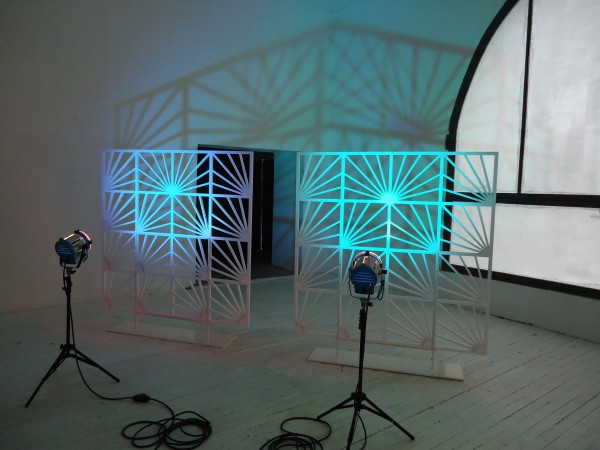 Sue de Beer presents a set of perforated screens lit by movie lights for her installation Silver and Gold. The lights, the screen, and the shadows all recall Flavin’s fluorescents at Chinati. De Beer’s work also includes a sculpture and a projected movie. Combined, the installation gives the immediate sensation of being on a film set. Another screen! Only instead of acting as a backdrop to a more grand exterior, de Beer’s installation heightens the viewer’s awareness of her body in the space. So much so, that after briefly looking at the work my friends and I spent a good thirty minutes taking pictures, goofing around, pretending we were characters in a goth play. 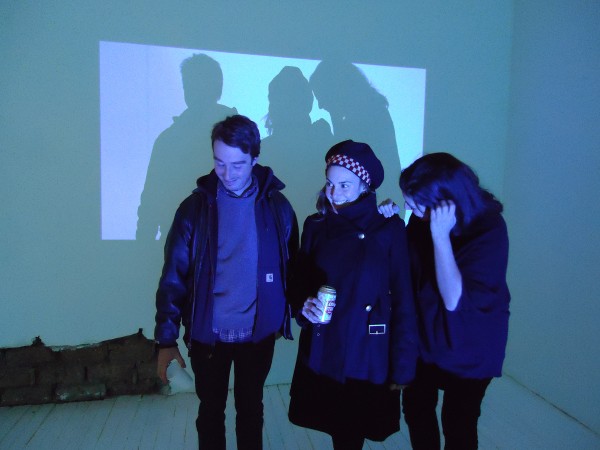 photo shoot in the de Beer

This work made clear to me how thoughtfully Momin and her team placed the works of art in their respective spaces. The arched windows, high ceilings, and white-washed wood floors of de Beer’s space all greatly contributed to the cinematic mood of the installation.

Stay tuned for Part II which includes Ry Rocklen’s smart sculpture and more of the desert landscape as empty canvas.