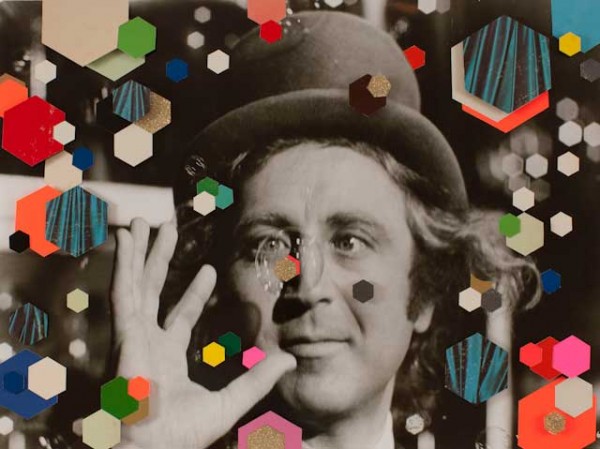 Somewhere between childhood wonder and adult disillusionment, Kelly O’Connor is creating a psychic landscape from fragments of familiar movies, TV shows, vacationlands and fairy tales. While she’s been making the collages mined from her childhood pop culture for years, O’Connor’s “Post-Utopia” show at the David Shelton Gallery seems more intimate and introspective, inspired by a photograph of the artist as a young girl standing in front of the Mammoth Terrace Falls at Yellowstone National Park.

With rainbow-colored water, the falls provide the setting for O’Connor’s most complex, three-dimensional shadow box, “Portrait of the Artists’ Room as a Child.” Judy Garland as Dorothy in “The Wizard of Oz” serves as her alter ego. The Scarecrow is surfing the falls, while Gene Wilder as Willy Wonka appears ready to leap using three open parachutes. On a cratered plain beyond the falls, the young girl in  “Poltergeist,” instead of a haunted TV, is kneeling before a silver vortex of six-sided polygons. Cosmetic bottles with clown tops, a lonesome coyote, Shirley Temple and a buffalo roam this psychedelic phantasmagoria of Americana. 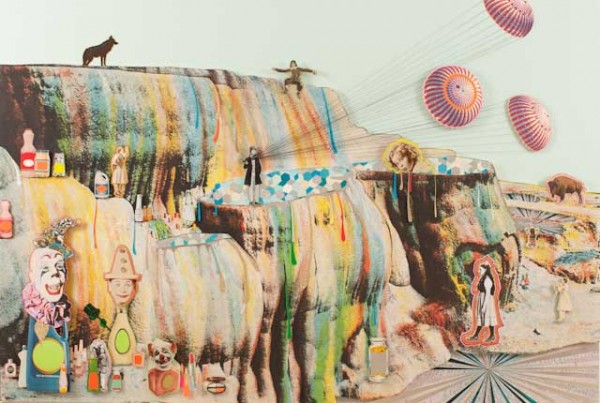 "Portrait of the Artist's Room as a Child"

“I am particularly interested in the duality of characters that represent American idealism, yet were often tragic figures in their actual lives,” O’Connor notes in her artist’s statement. “Much of my work is about the exposing the reality behind these public facades. Judy Garland is a recurring heroine in my collages. Her classic film, ‘The Wizard of Oz,’ is full of magic and pure artificial joy; yet Garland’s real life was quite tragic. For me, she represents the loss of innocence.” 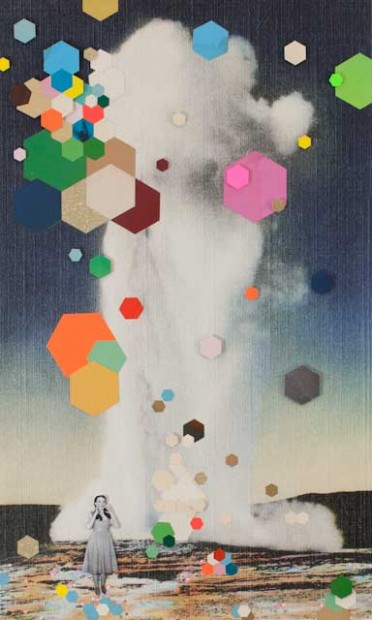 Gilded wasp nests studded with ceramic beads painted with nail polish in brilliant colors perhaps best represent the mixture of good and evil in her work. Shiny and appealing on the outside; dark and menacing when you peer underneath. Based on the forms of the openings in a wasp nest, hexagons float through her collages like other-dimensional spirits. In another Yellowstone scene, Garland’s Dorothy, who appears to be calling to the viewer, stands near Old Faithful spewing a white geyser sprinkled with multicolored hexagons.

“I create candy-colored surfaces that are so sweet it’s sick, and incorporate colors sampled from vintage record covers,” O’Connor says. “The contrast of sparkling rays and neon colors against weathered, dull tones acts as a metaphor for the duality within the characters.” 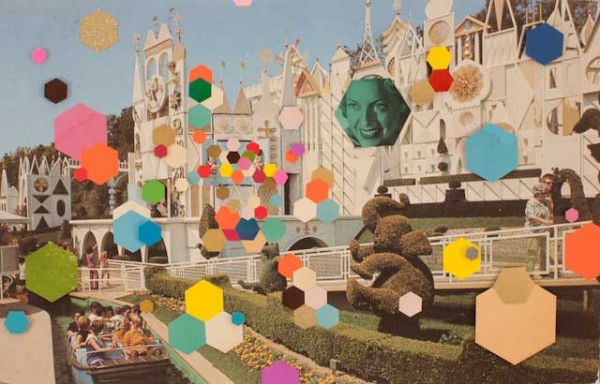 In “Small World,” the brightly hued hexagons are adrift in Disneyland, evoking memories of the dreaded giant ball bouncing along in “The Prisoner” and one seems to have captured the essence of early 1960s TV Mom. O’Connor’s hexagons appear to merge with tricks of the lens in a portrait of Wilder’s dreamy Willy Wonka looking slightly cross-eyed at a bubble containing a pair of orange and gold polygons. Green, white and yellow hexagons ride on a huge vehicle used to transport rockets, but this “Launch Pad” is probably intended for the imagination.

Clipping from fairy tales, fashion magazines and movie musicals, O’Connor uses felt, thread, fabric and other materials in her upbeat tributes to girl power leavened with adult humor and a realist’s cynicism. Formerly a studio assistant to Linda Pace, who founded ArtPace, O’Connor has been the registrar of the Linda Pace Foundation’s extensive contemporary art collection since 2006.

As part of her installation at the new Shelton gallery next to the new Liberty Bar on South Alamo Street in Southtown, O’Connor installed multicolored rays of light that appear to shoot across the windows and one of her wasp nests hangs from the ceiling in a shadowy corner. Shelton says he’s asked O’Connor to make new work for the Texas Contemporary Art Fair Oct. 20-28 in Houston. 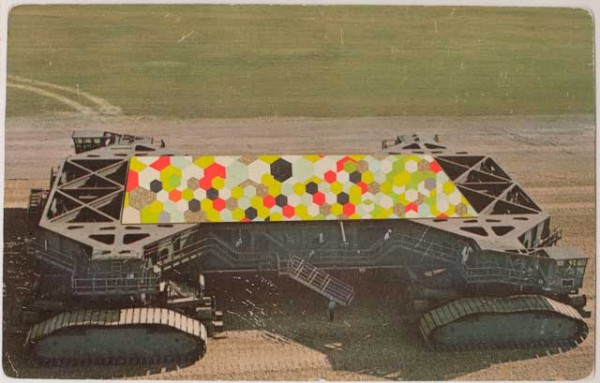