There’s this faction of contemporary artists who seem to feel at pains to jargonize, obfuscate and otherwise Other-ize their own work. If you need to have read Derrida and to have seen the whole canon to get what an artist is doing, that’s cool. But cool is a value of middling worth. The pernicious cycle of the art world talking primarily to itself has read as pretty damn airless to the wider audience for years.

This has been pointed out before, and often, by all manner of popular media, and by trends in contemporary work, too. Often enough, the art world comeback to this highfalutin epistemological circuit is to create parody objects, or exhibitions of winking meta-conceptualism. Both approaches can make for compelling work, but tend to plant themselves in the same hothouse as the stuff they’re reacting to. 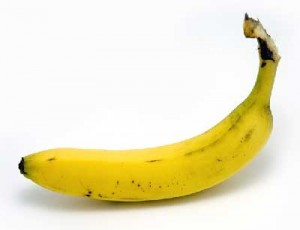 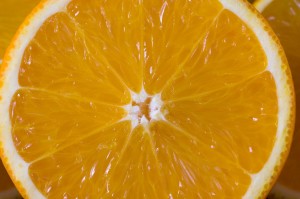 …I guess so. But it’s not likely that orange would’ve meant anything to me, had there not already been all those damn bananas. It’s a banana-predicated orange. It’s still fruit, dammit.

Maybe the most ham-fisted of accusers of contemporary art as unapproachable is Morley Safer, who made not one, but two notorious (but popular) “60 Minutes” segments about Art He Doesn’t Get and Neither Should You. He snarks, and shrugs, and wrings his hands and wanders around art fairs and goes the whole ,”Is this art? but it’s not even pretty!” route. His failure, though, is failure to engage. It’s absolutely valid not to be able to, or refuse to, assemble the artist’s obscure or armored variables. But Safer doesn’t even give it a go.

In Radcliffe Bailey’s case, he puts forth a myriad of symbols most of which are utterly attainable. This is not easy, and it’s very powerful. It asks of you that you assimilate, discover and synthesize, whole-brain style. 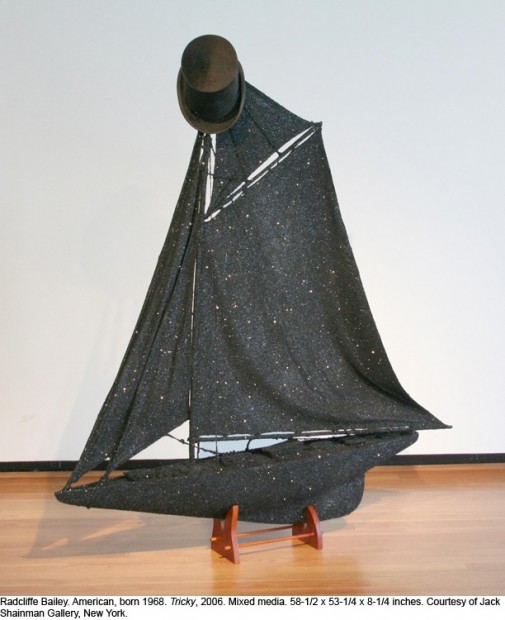 Radcliffe Bailey, “Tricky,” 2006. Mixed Media. Collection of Elliot and Kimberly Perry, Memphis TN. Tricky as in tricked-out? (The glittery sailing vessel). Tricky to create? Tricky to claim as one’s own territory, as the artist -African-America does here, with the abolition-era top hat?

And you’ve  got time to see Radcliffe Bailey’s exhibition Memory as Medicine at the McNay—but just barely.

Get down there before September 2, when his assembled treasury moves on. But for right now, and thanks to the High Museum of Art in Atlanta, you can encounter something a thousand times worthwhile.

It’s an educational and truly contemporary exhibition for anyone. This includes your kids. This universality is crucial to its value, very much by design, and highly, highly unsual for the present contemporary art “moment.” 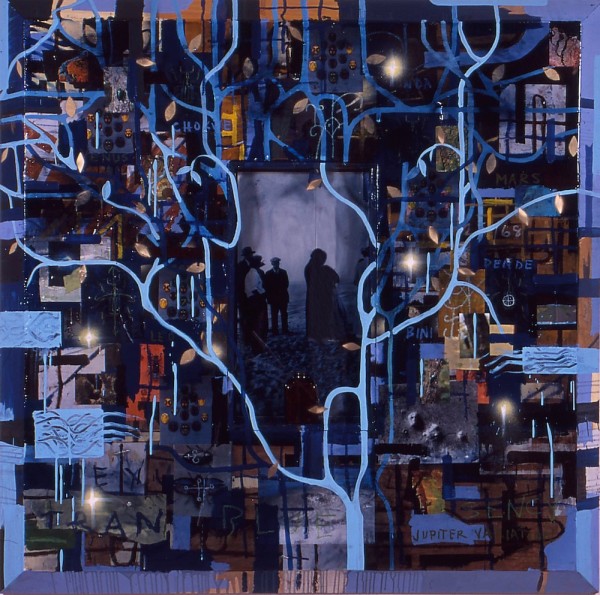 Radcliffe Bailey, “Transbluency,” 1999. Acrylic, photograph, Plexiglas, oil stick, collage, resin, and glitter on wood. Collection of Betsy Beaman and Burn Sears, Atlanta. The central photographic image may be one of thousands given to him by his family. IN this image, as in the accompanying video in the back of the gallery, graceful tree motifs carry a lot of emotional and historical weight.

If Mr. Bailey’s execution were not so blazingly confident, and his historical depth not so searingly immediate, I would’ve been intimidated to write this, for fear of seeming condescending. Particularly as Bailey is a Black artist, and I’m white, and so often the (usually white) critical response to art by African Americans is either an attempt to render it as heartful and harmless (look at what we’ve done to Leadbelly), or to take on what’s perceived as a revolutionary ethos in a reductive, secretly nervous, “so much word” non-analysis (AKA, many white critics of hip hop).

Bailey’s work outpaces all that, though. Where the art world’s primary art world  joke is all bananas and oranges, Bailey’s work is a kelp forest. Deep, rich, rooted and waving in a hundred currents. 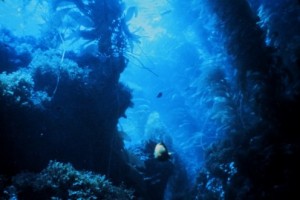 Available to whoever’s willing to venture, no ethnic apologia necessary.

I went to look at it before the show opened, earlier in the summer. It was a walk-through with several other people. I was transported by the for-real majesty of experiences like Windward Coast 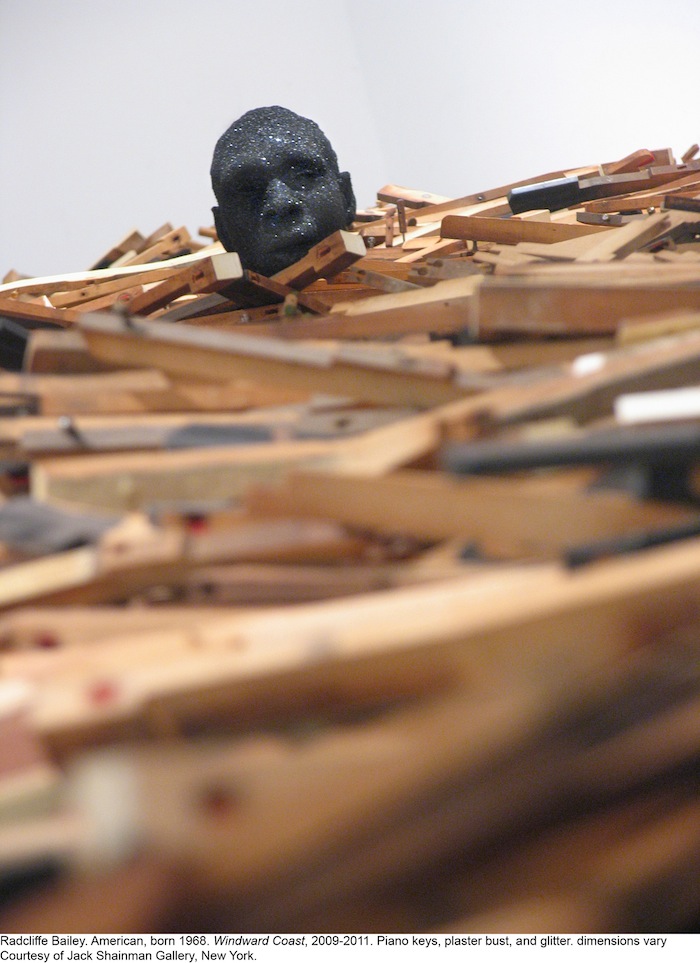 … an immersive, room-sized installation in which a lone, black, sparkling figure presides over—and is tossed by—a churning sea of piano keys. Is the man drowning, or escaping? Is this depicting Katrina, or “Slave Ship,” or is this an embattled soul engrossed and solitary in a landscape of pure music?

Windward Coast is an unforgettable installation, and a great example of how powerful, large-scale sculptural work can be. It’s also an infographic of the show’s repeating themes, including the abduction and enslavement, the ongoing connection with Africa, baseball and the blues, human origin, and the biological data of life. There’s a solid observation of Victorian and early-20th century experience as well, the absurdly divided but nonetheless true excellence of the Negro Leagues, say. Bailey hat-tips to Basquiat and Bearden (and, for that matter, to Twombly), even as he re-energizes baseball and the blues. One particularly charming and unsettling artifact of Memory as Medicine is an elegant and outsized blue-painted baseball bat, the permutations of which are likely to be different from viewer to viewer.

OK, so the “elevator pitch” of Memory as Medicine is that Radcliffe Bailey demonstrates that the history of Black America is embedded in each Black person, and further that all history lives in each person, everywhere. He uses an arsenal of materials and techniques, including assemblage, painting, collage, gouache, watercolor, woodwork, sound and video. He offers his own family artifacts (an aunt provided him with nearly 4000 family photos and documents) and DNA research to allow us into his personal narrative and context. He guides us through a personal history and a cumulative river of history, without sermonizing or disingenuous manipulation, through his open personal heritage and clear storytelling. 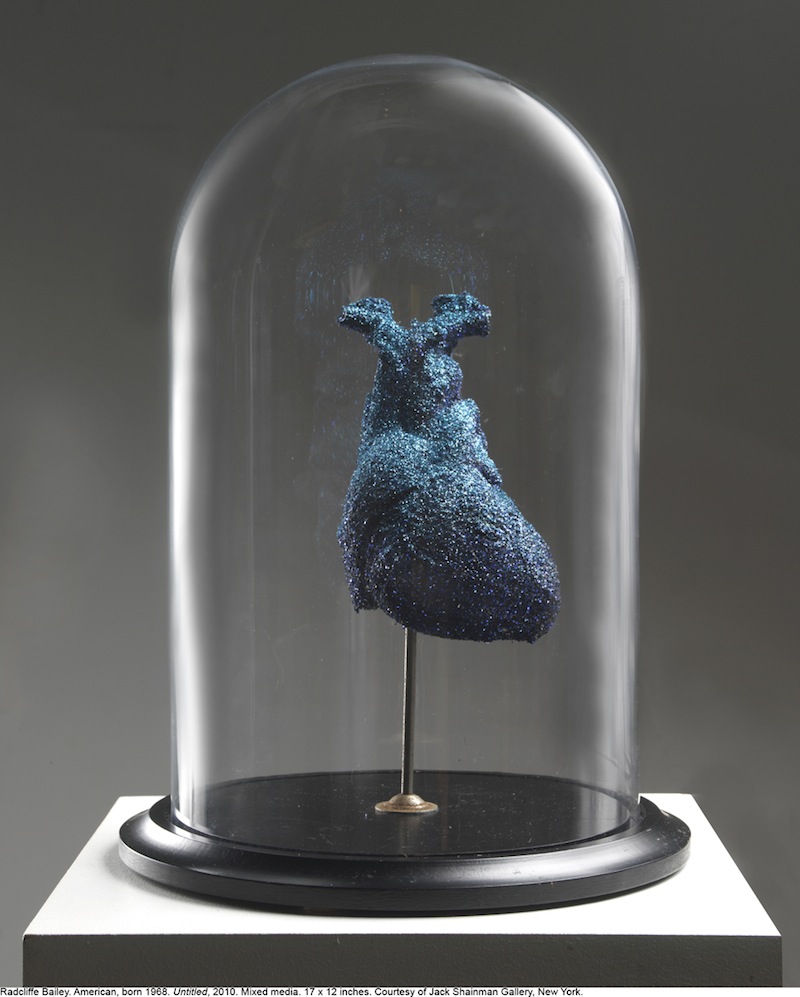 Radcliffe Bailey, “Pullman,” 2010. Mixed media. Collection of Patricia Blanchet. If you don’t know the context, you should look up Pullman Porters in the e. 20th century. Lso, consider this interview quote from Bailey, himself: “I use Georgia clay because it’s in my backyard. My backyard is on Civil War grounds―boom. Then I trace that to family members that were in the Civil War… and to my father being a railroad engineer.”

I’m reluctant to unpack the pieces too much. Bailey presents them to each viewer to dis-assemble and reassemble. At the risk of sounding like a set of book club questions, I’ll stand off long descriptions and suggest you look for the myriad uses of water, the repeated strands of DNA, the several roles of ships and boats, the word “pulmonary,” the number 1968 and the story of Black America as an unending stream starting not with the arrival in chains, but in the diversity and complexity of Africa itself, as both place and idea. I propose you pore over the details, then back up and look, then look closely at details, again. If you’re not able to see the McNay show, look at the slideshow. Do some Googling. Have you seen Dr. Henry Louis Gates’ “Finding Your Roots”? If you’re African American, how do you internalize or cope with your history? How much do you know? Whether you are or aren’t African American, which connections between your family history and human history do you value, and which, if any, hurt? 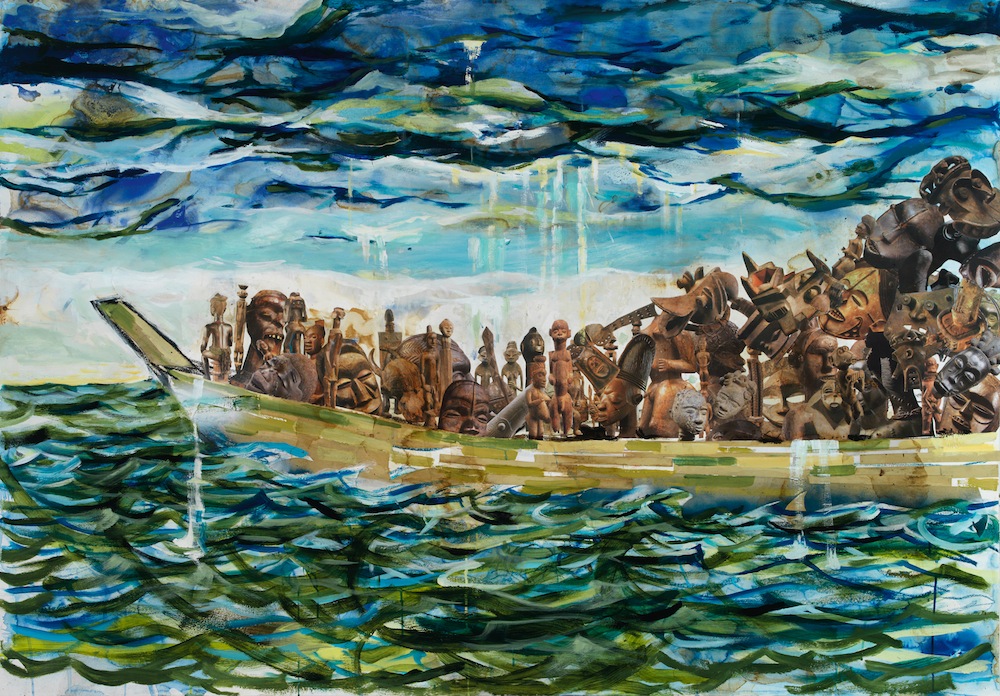 Distant relatives: Radcliffe Bailey’s  “Western Current” 2010.Watercolor, collage and mixed media. The Hobdy Collection in memory of Walter Hobdy, Jr. The Congolese minkisi figures who act as “passengers”  seem to embody the enslaved Africans, particularly arresting as very often, African masks have been used by European modernists to access some notion of human wildness, not specific lineage and loss. Bailey has traced his maternal DNA  from the Mende, Limba, and Temne regions of Sierra Leone, as well as the Bidjogo region of Guinea.

My mom is a longtime docent at the McNay, by  the way. She mainly does tours for schoolchildren, and has for 40 years. She’s been lamenting that Memory as Medicine is a summer show, because there is such dialogue to be had with kids about—man, so much. She did wind up getting to do a tour with “at-risk” preadolescent boys, mostly non-white kids, and described her own and their experience as highly emotional and revelatory. The boys found a lot to connect to, and a lot to wonder about, and were very much aware of what they brought to the experience. They knew more than they thought they knew, understood more than they are assumed to be able to understand, and synthesized and articulated on the spot. They (probably) hadn’t read Derrida. They weren’t looking for something to buy. They weren’t out to please anybody with their erudition. The kids made observations that had never occurred to them before, or to my mom, and that maybe would not have occurred to any of them, young boys of African heritage or older white lady who remembers 1968, if Bailey hadn’t spoken to them. Which is why Radcliffe Bailey is important; this is how art serves the culture of the soul.

One of the central qualities to African American arts and letters of the last 300 years, it seems to me, is an ineffable sophistication. The density of bebop, hip hop, the explorations of Afro-Futurism, strong and slippery fictions by Baldwin and Morrison and Baraka and Hughes. To reduce the Black experience to folk trope is worse than ignorant, it’s impoverishing to absolutely everybody. The layers of medicine that Bailey administers, from drawing salves to gentle balm, remedy both fresh wounds and chronic human conditions. 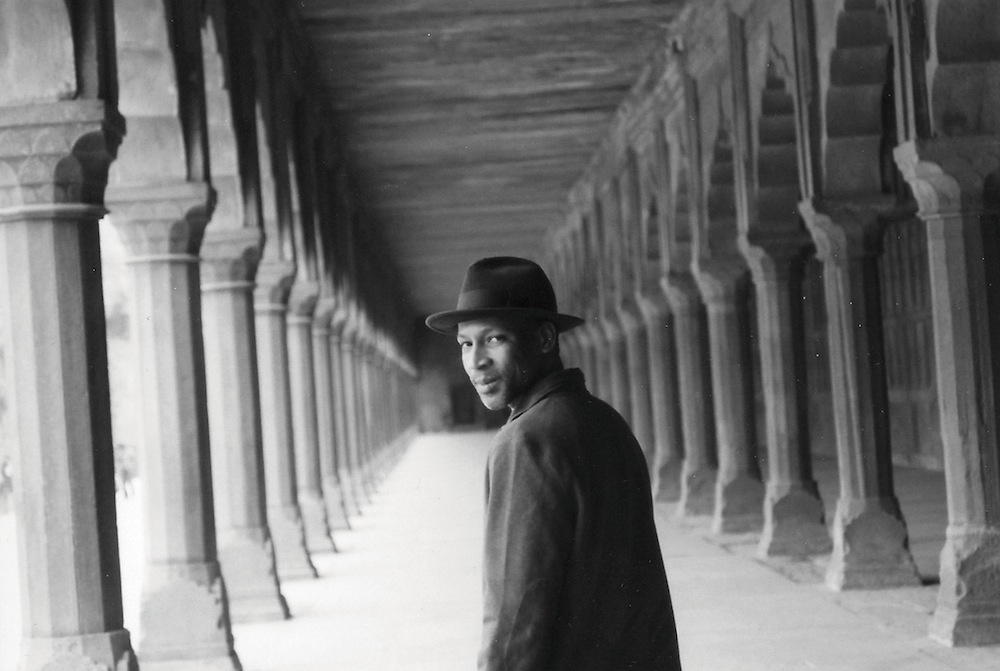 “In the Corridor,” photograph of Radcliffe Bailey by Victoria Rowell.

“I’ve always felt like the only way I can heal myself throughout certain things is to go back through my memory, learn from memory.” — Radcliffe Bailey, in interview with the High Museum, 2008.

Jenelle Esparza: Artists Looking at Art at the...

Thank you, Sarah, for bringing this to my attention. Thank you for breaking it down a little for me and giving me ideas to research before I go see it.