Steve Hodges sits on the edge of his bed staring down at his bare feet surrounded by philosophy. 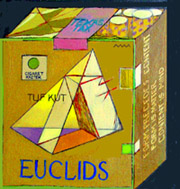 art by Steve Hodges...Courtesy of the artist

Steve Hodges sits on the edge of his bed staring down at his bare feet surrounded by philosophy. Disheveled books by and about Bergson, Buddha, Whitehead and Merleau-Ponty present to him a field of colors and curled-up covers of paperbacks. He reaches for something yellow, next to the roll of toilet paper he uses to pick up dog shit under the computer table. It’s a copy of ARTLIES 39, so he starts the day with Garry Reece’s Thoughts on the ArtPace Symposium: Is anybody listening? “The guy can write” he thinks, pouring himself more coffee as another little piece of cigarette ash falls, landing, and resting, on the top of his right foot. At the end of the article he reads that Reece is working on a novella about Monk in the renaissance. “I’ll send him an inkjet of the Round About Midnight/Monk’s Autograph piece, he thinks, “for being a good writer,” and he remembers Monk, a woman on each arm, happily agreeing to the autograph one alcoholic evening in the Village Vanguard in the same little vestibule just outside the restrooms where, stunned, he had watched Coltrane on a different evening flute-practicing as sweat dropped off the end of his nose, this just after a set on tenor consisting of a single tune that had lasted two hours!

Steve Hodges can’t remember the last time he read an article in an art magazine. “Not much there for a European American” he would say. “Just more bullshit about how art and life came together, as if they weren’t always together!” Bored with the irrelevance of “social-engagement constructs,” he reaches for his Parker’s 1945 Vacumatic fountain pen and begins to write in his thirty-ninth journal as Bergsonian memories well up from the previous afternoon’s fiasco when the figure-drawing room filled up with toxic fumes from the roofing job in progress on top of Lamar’s Art Building, and there he was with a model and a dozen art students all dressed up with no place to go so he walks them down to the Senior Painting Space and let’s them bother a couple of working painters for a little while. Eric begins to talk to the students about his painting of the interior of an automobile which he is calling a “landscape,” and Justin just stares at the whole intrusion of the group into the studio space, as the monolithic, totemistic, mute head at the top of the canvas on his easel stares out at the students with him. Suddenly Ray Daniel, curator from the Southeast Texas Art Museum, appears, and tells Steve Hodges that he brought over some copies of ARTLIES and if he wants one he’d better get over to the Dishman Art Museum quick because he just put a stack of them on the front table. 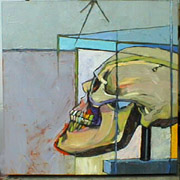 art by Steve Hodges...Courtesy of the artist

On his second pot of coffee, Steve Hodges now stares at the little scrap of shag rug under his bare feet and decides to look at each individual little loop of the carpet for awhile, moving from loop to contiguous loop, as a focusing exercise, and wonders who spun the threads and then realizes there was no “who” involved but rather an “it”. Then Adam knocks on the door. He’s a painter, too, but he’s come to collect $960, half of the gutter-fascia-job he’s going to do on the house. This breaks the rhythm of the morning’s solitude. Adam looks at the new work hanging over the mantle. One painting shows a cartoon-self-portrait of Steve Hodges standing in front of a painting which isn’t a cartoon at all, but rather a reinterpretation of a small drawing from Hodges’ Journal #24 depicting a drawing from a reproduction of an Orazio Gentilleschi painting of a reclining female nude reaching toward the heavens as Zeus impregnates her via a falling cascade of gold coins which, in the Hodges painting, has been transformed into areas of high-chroma color separated by lines from a second drawing from another time and place and journal of a straight-line-but-fractured-grid based on the Golden Mean. In the painting, the cartoon Steve Hodges, in a kind of “I’m a professor lecturing” position, says, in a cartoon balloon, “Geometric vs. Organic.”

“I really like this new direction of your work” says Adam the painter-painter-gutter-fascia-ex-student-guy now looking at the unfinished painting in which a naturalistic image of Steve Hodges stands in front of a painting which is an interpretation of a gesture drawing from Journal #7 depicting a saxophone player, this being, also, an image from which yet another past couple of paintings were made, one of which sold to a private collector. The naturalistic Hodges in the painting says, in another cartoon balloon, “I actually SOLD a painting based on this drawing”. “Thanks,” says Steve Hodges, now writing the check for $960 in amazement at how fast the money from the refinancing of the house is outgoing!
Adam leaves with his money, and Steve Hodges writes in his journal, “Where is there a law that says I can’t write an article about myself in the third person and submit it to GlassTire?” Then he returns to the studio, squeezes out some Gamblin Indian Yellow, pushes some gray into it, and returns to work.

Steve Hodges is an artist living in Beaumont, TX. 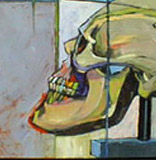 Getting philosophical with age, thinking about artists I used to know, I remember a Steve Hodges who was called “my best friend” by my ex-husband Jim Olson. The only time I ever met Steve was in Port Arthur (we were in school at UT) don’t remember why the hell we went to Port Arthur, except to see this legendary painter and friend. A few decades ago I divorced from, and lost contact with, Jim Olson, and sometimes wonder if he is even still alive, or if so, what he’s doing. IF YOU are that Steve Hodges (your work looks like you could be) do you know what ever happened to Jim Olson? Not looking to reconnect, just wondering sort of philosophically how life has worked out for him. He was a good guy.

Found your comments while looking for Steves obituary. He died Thursday after a long battle with lung cancer. I visited with him a couple of weeks ago and asked him about Jim Olson who was a friend of the two of us at UT. He had not kept in touch with Jim and did not know if indeed he was still alive. You are right Jim was a good guy. So was Steve.