Al Souza has been making mosaics from jigsaw puzzles for a while now, but these are his best yet. 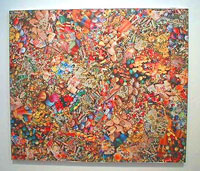 The thicker buildup of puzzle pieces (five and six layers deep) give these new works at Moody Gallery a satisfying heft, helped along by deep boxlike aluminum frames which confine their riotously reticulated surfaces. Souza has also replaced the old thrift-shop puzzles he used to gather with brighter, less nostalgic new puzzles pieced together by an informal squad of puzzle assemblers. 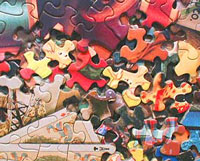 The two best works in the show are the two largest: “Nuf Said and Field and Stream. “Nuf Said is clotted with an overwhelming load of spools, jewelry, Easter eggs, Lifesavers, baseballs, seed packets and other glitzy junk collaged together from wickedly difficult puzzles which are close-up photographs of similar objects. Souza and the puzzle designers share a common interest in minutely textured surfaces, Souza’s mosaic harmonizing with the intricate photographs to multiply their dizzying claustrophobia. In Field and Stream the irregular edges of Souza’s puzzle sections blend seamlessly into the irregular details of flowery fields, rock formations and waterfalls. As in “Nuf Said, there is a mutually reinforcing correspondence between the textures in the photo images and the puzzle texture itself, which gives these pieces a necessity lacking in works like Surprise Inside and Town and Country. 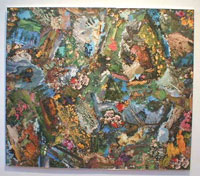 Souza’s puzzle works are meant to be looked at up close; from even a short distance they melt together into muddy pointillism. Novel technique aside, Souza’s puzzle pieces are essentially collages of printed photographs, and are limited to the color range and intensity of process printing. They can’t compete with paintings as color fields. This muddiness is used to good effect in Yum Yum, in which a gluttonous surfeit of cold cuts and ice creams jostles and sloshes atop itself in a reddish-brown glow like a restaurant heat-lamp. From a few feet away, the image becomes a pool of gravy-colored sludge, precisely evoking the queasy lethargy of overindulgence. Where’s Waldo, made from many similar puzzles, has the show’s most consistent color scheme. The original difficulty of locating the little nerd among thousand of decoys is absurdly magnified.

Souza’s technique juxtaposes areas of smooth, assembled puzzle images with raggedly unfinished edges; in his best pieces these ragged edges are used purposefully to enhance the works” frenetic action. Surprise Inside and Town and Country have edge problems; focusing too heavily on finished pictures, making the unavoidable rough edges an unwanted distraction. In Surprise Inside, large Muppet faces stick out from a sea of random in-fill. Likewise in Town and Country, disconnected vignettes of skyscrapers and farmhouses are bordered by puzzle fuzz.

Second Vanishing Point is the weakest work in the show. Souza uses the edges of puzzles to make a radiating mandala that, since it has nothing to do with the puzzle imagery, becomes a trivial exploration of technique for its own sake. 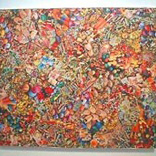