by Caitlin Duerler Chávez May 25, 2022
FacebookTwitterEmail

I admit I was an art fair virgin before attending the Marfa Invitational earlier this month.

My prior visit to Marfa in August 2018 had me hooked on the desert vibes, art interventions, and creative community. So when I saw the announcement for the fair back in November 2021, I immediately pitched coverage of the event. 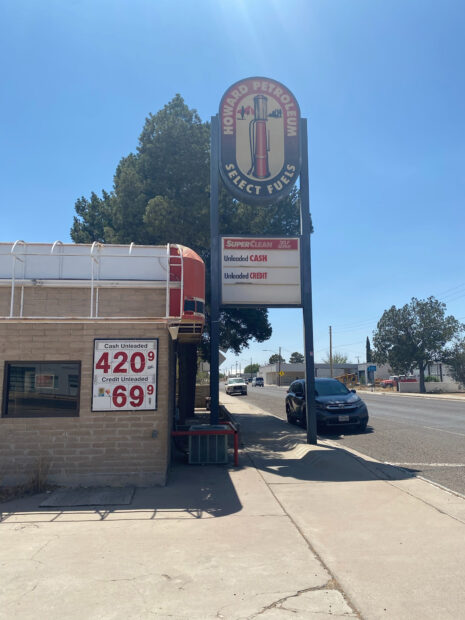 I arrived late Wednesday night in Marfa after a twelve-hour trek from the Gulf Coast. The following day, I spent my early afternoon visiting The Chinati Foundation — the institution spearheaded by Donald Judd that mythologized Marfa’s identity as an art mecca in the desolate Chihuahuan desert.

The vernissage Thursday welcomed VIPs, including yours truly. A flash of a rubber yellow and blue bracelet allowed me entrance to VIP events hosted throughout Marfa and auxiliary sites like the neighboring town of Valentine, accessible by short drives on Highway 90. Hosted at Saint George Hall, the small fair opened to several hundred visitors who floated through the eleven participating booths, sipping on complimentary margaritas and sparkling waters. 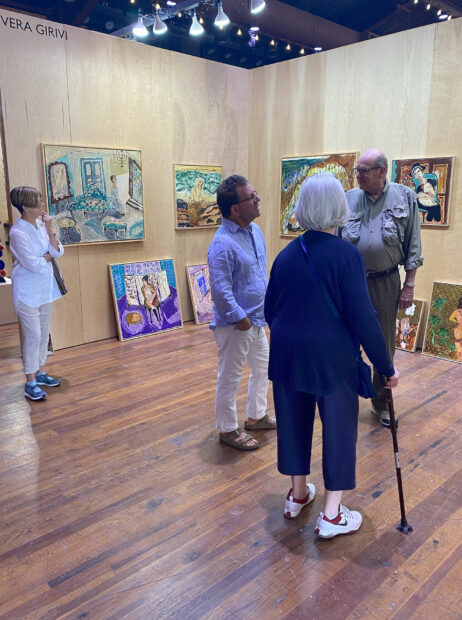 James Barron Art’s booth with paintings by Vera Girivi, on view at the Marfa Invitational, May 5 – 8, 2022.

As mentioned before, I did not know what to expect because I had never visited, nor covered, an art fair. My first observation concerned exhibition design — the natural wood paneling dividing the booths and the sunlight flooding in — created an open-air feeling complimentary to the Marfan vibes of architecture that responds to the vastness and color palette of the surrounding landscape. 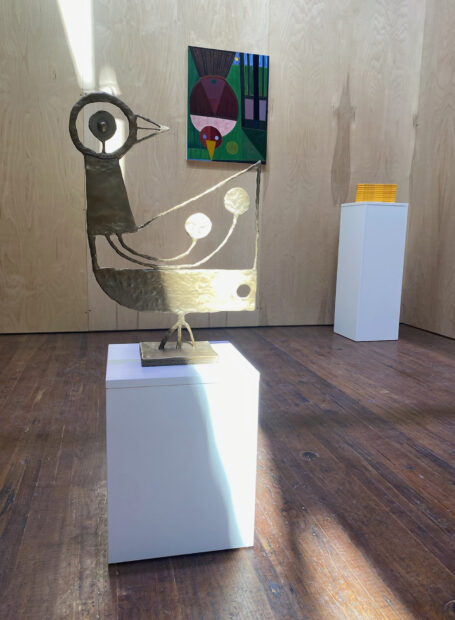 Baldwin Gallery’s booth with sculptures and paintings by Austin Eddy, on view at the Marfa Invitational, May 5 – 8, 2022. 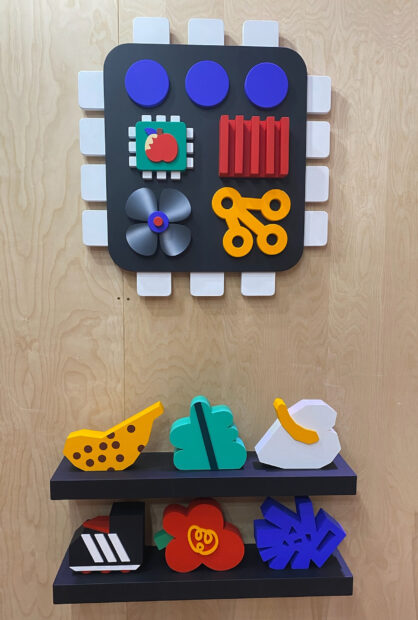 Tim Irini’s sculptures on view in Carl Kostyál’s booth at the Marfa Invitational, May 5 – 8, 2022.

The VIP pass allowed access to events scheduled throughout the weekend, including a social and spectacle at The Mercantile in Valentine. Local high school rodeo girls sported bright pink Cynthia Rowley outfits as they galloped around a makeshift track and zigzagged through barrels, sending rocks and dirt onto viewers in the front row. Vogue coverage of the event described the models as “comely,” but I thought of Marfa-based artist Nancy Newberry’s portraits of West Texas teenagers during their after-school activities. Even though the girls’ participation in the fashion show was brief, I could imagine it as a formative and validating moment for their hours spent preparing and participating in statewide rodeo events. 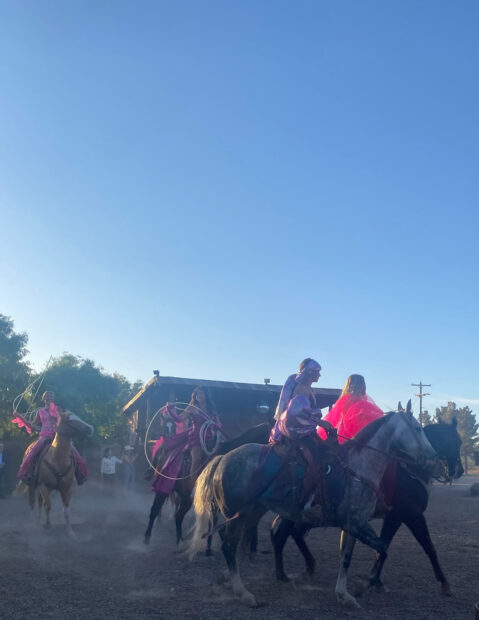 While I enjoyed the privileges that wearing a VIP pass afforded me, I was not prepared for the icy reception from exhibiting galleries. As a journalist, I prepare to write about exhibitions and artists through preliminary research. Still, I also like to engage with artists, curators, directors, and other arts professionals and viewers. Perhaps due to my inexperience in visiting art fairs, I was disappointed that many booths remained unattended by gallerists or, if they were present, they did not want to have any conversation with a Texas arts writer about the exhibiting artists’ work on view.

However, outside of the fair, the Marfa arts community accommodated conversations and tours with me, soothing any feelings of imposter syndrome I may have experienced at the fair. Perhaps vexed at times by the influx of VIP tourists, the locals shared and supported projects across the arts community, guiding me to check out exhibitions that were not initially on my itinerary. 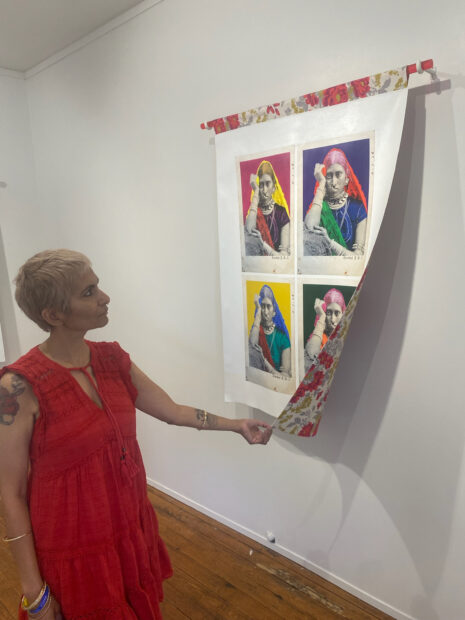 With opening dates coinciding with the Invitational, RULE Gallery and JEFF Marfa mounted two excellent exhibitions featuring work by women artists. At RULE, which functions as both a contemporary art space and a home furnished with a bedroom and kitchen, the two main gallery spaces featured new mixed-media works by Renluka Maharaj. In her show Lambi Kahani (Long Story), the artist reconsiders the photographic legacy of western colonial portraiture of Indian and Caribbean women. In her series of mixed media works, multiple images of the same subject, initially rendered in black and white and sepia, are printed in bright colors and mounted to chintz— a fabric originally created as a luxury in India that has been bastardized and cheapened by Western mass production. 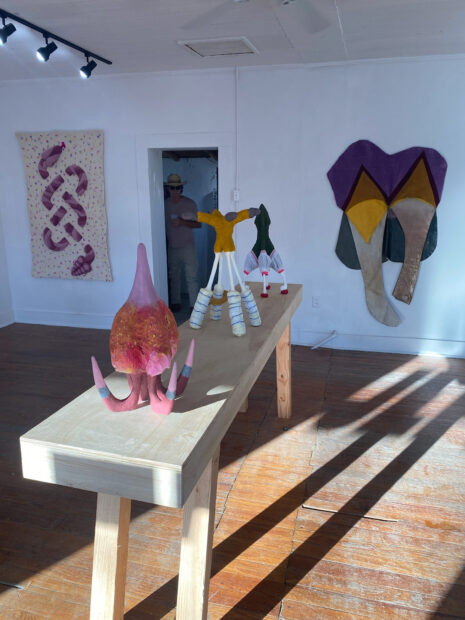 “Soft Anatomy” installation view at JEFF Marfa, with mixed-media sculptures on the table and hanging work on right by Amy Butowicz; artwork on the left by Aurora Pellizzi.

Fellow Gulf Coaster and curator at the Galveston Arts Center Dennis Nance guided me to check out another nontraditional gallery space, The Wrong Gallery, and their exhibition of works by Joey Fauerso and Gyan Shrosbree, on view in a former chapel. The gallery is operated by longtime Marfans and artists Buck Johnston and Camp Bosworth, who also operate the WRONG Marfa store. 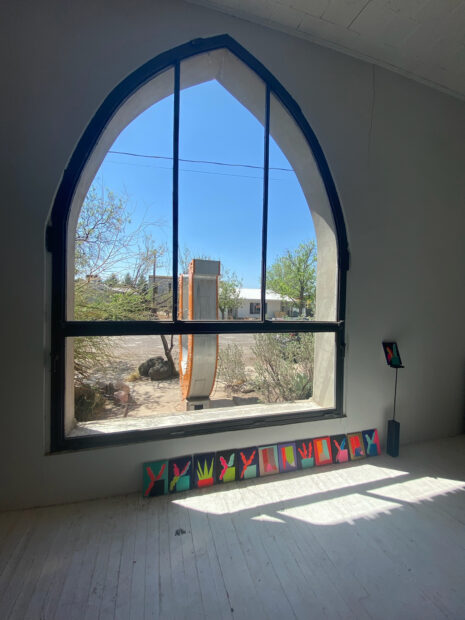 Installation view of paintings by Gyna Shrosbree in “Let Me Hear Your Body Talk” at The Wrong Gallery.

I also met Dallas-based artist Zeke Williams, with whom I may have rubbed shoulders within the pink limo at Emily Peacock’s Lawndale exhibition opening last fall in Houston. Coinciding with an event at Marfa Invitational exhibitor Nino Mier’s gallery, a door connected to Eugene Binder gallery spilled visitors into Williams’ exhibition of scrapbook landscapes pieced together by bright patterns and textures. 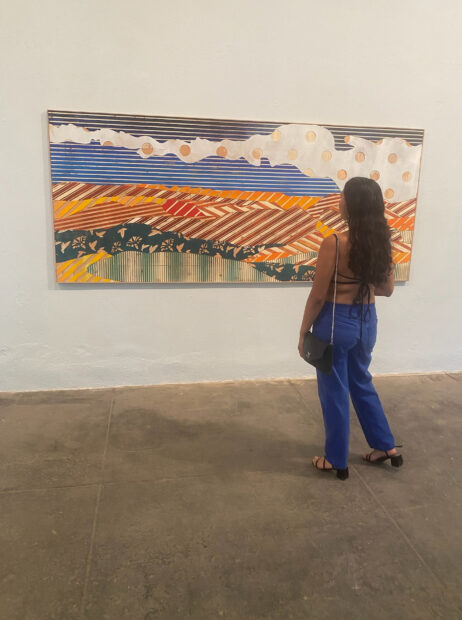 Marfa’s identity was created at the junction of its environment, Minimalism interventions, and the way a thriving contemporary art community concreted its legacy as an arts destination. With its third iteration, the Marfa Invitational still seems to be searching for its identity, with its most powerful moments happening in the exhibition of early-career artists, and in the coordination of offsite events with the local arts community. 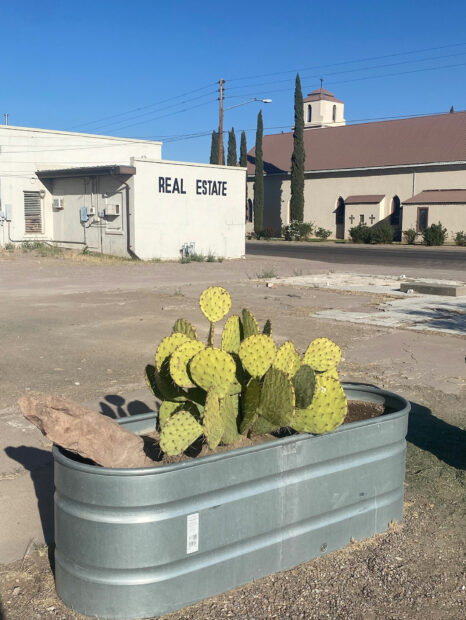 View of a real estate office, in front of a church in Marfa, Texas. 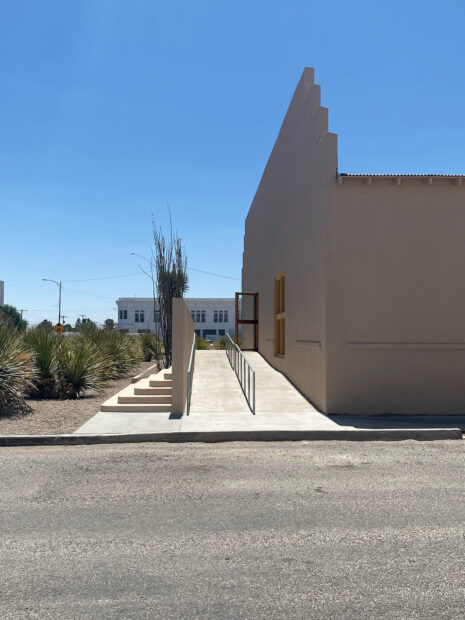 Exterior view of the Chinati Foundation’s Chamberlain Building, recently re-opened to the public in April 2022. 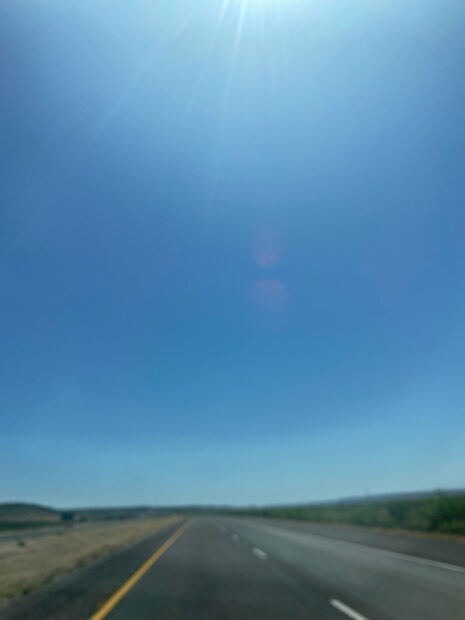 An image accidentally captured on my cellphone while trying to record videos of the road while leaving Marfa on Saturday morning, May 7.

refreshing take on Marfa scene and this particular event.

Great perspective on the invitational. Me and my art sisters were there and it was definitely a new kind of art experience for us all.