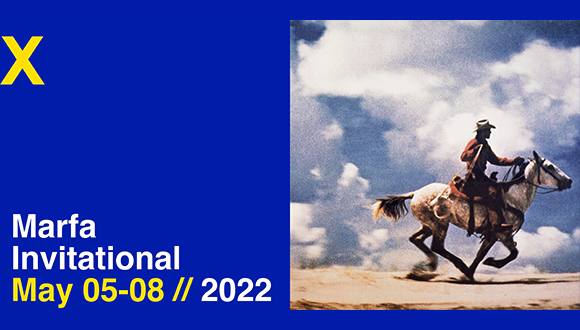 The Marfa Invitational, an art fair hosted in the small West Texas town of Marfa, has announced that it will return next year. Scheduled for May 5-8, 2022, this will be the boutique fair’s third edition, and it will again take place in Saint George Hall, an event space at the center of town.

The fair’s most recent iteration occurred in April of this year, and featured nine galleries showcasing works by twelve artists. You can see photos from the fair here.

Back in February, the Invitational’s founder, Michael Phelan, said that the fair was at work building a year-round space for installations, performances, and to house the fair’s future editions. In an update to Glasstire, Phelan reports that work on the “two 10,000 square-foot Exhibition and Performance Pavillions” is “full steam ahead,” but that supply chain delays cause by the pandemic have delayed the space’s opening.

In addition to normal fair programming, the weekend of the 2022 event will feature a new outdoor sculpture component, held on location of the fair’s future home, which, according to Phelan is “just on the edge of Marfa, surrounded by ranch lands.”

There’ll also be a local component to this year’s event: the Marfa Invitational Locale, which will be a sort of citywide open house on Friday evening (which is no doubt inspired by Chinati Weekend’s Friday “Made in Marfa” citywide event).

Rounding out the weekend will be a performance — this year by fashion designer Cynthia Rowley — along with artist and collector talks, and more. The event’s VIPs will have special access to local private collection and home tours.

The galleries participating in the 2022 Marfa Invitational include, among others:

For more information on the fair, please go here.