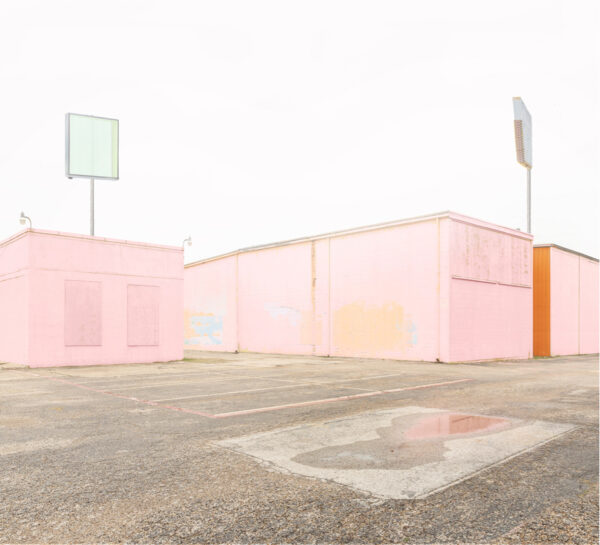 Leigh Merrill’s photographs are seductive; they lure you in with an almost painterly touch for surface, texture, and color. Known for making works that add or omit visual information, Merrill’s method is similar to the procedural nature of painting. That is not to say the supposed “documentation” role of the photograph is altogether abandoned, but rather the artist seems to delight in the contradiction between capturing our world as a record of the real, and building a fiction seen only in her art.

In Boxes, Warehouse, we find an image heightened by Merrill’s strategic reduction of visual information. Depicted are the backsides of several commercial buildings captured/rendered as basic shapes washed in softly muted pink, faded turquoise, and coral. Two storefront signs stand on poles above the simply shaped warehouses. The signs, erased of any words, face each other as if in a call and response conversation. The artist understands that if she withholds information, the viewer is enticed to fill the pictorial and narrative gaps.

For the picture, we as viewers are placed behind the buildings in an asphalt lot. Merrill gives us a vantage that is the opposite of the forward-facing business; she eliminates both the overt identity and the essential, retail function of the structures, and instead chooses to show some other semblance of their character.

Essentially, Merrill makes the complex’s unpresentable underbelly the star of her art. Her trick is to make the backsides of the buildings feel hyper-aestheticized with a nuanced attention to gradations of color, geometries of shape, and the material differences between wood, metal, paint, sky, and ground. Merrill’s photograph feels like a miniature world, or a backdrop for a movie set; there is an air of the uncanny abutted against the grim reality of buildings, made of cheap materials, that have been weathered and roughened by long, casual use.

I might be letting my imagination run wild, (something that Merrill’s photos invite), but I see a puddle shape in the foreground that resembles a portrait bust seen in profile. The pastel pinks of the building’s walls are reflected in the watery chest. Perhaps this is the artist’s nod toward a kind of anthropomorphic reading of these anonymous buildings, imploring us to reconsider them as worth knowing. Either way, Merrill weaves a kind of magic within her art to foster our curiosity about the banal. She masterfully frames her ordinary subjects in a way that invites us to pay attention to details and appreciate the unusual presence she captures. This, in some small measure, reinvigorates the role of the photograph in a world of ubiquitous and profligate snapshots.

“Leigh Merrill: Blue Crush” is on view at Angelina College’s Visual and Performing Arts in Lufkin, Texas through October 28th.

Looks like a great show! Thanks for the insights Matthew.