“Whereabouts and Hideouts” at the Museum of Texas Tech University

by Michelle Kraft May 24, 2021
FacebookTwitterEmail

When I was around seven years old, my family traveled to Weslaco, Texas, near the Mexico border, to visit our aunt and uncle, who was at that time serving as Weslaco’s city manager. While there, we went to see my cousin in a play at the (Water) Tower Theater, which was housed in a 1920s water storage reservoir. Waiting for the show to begin, I recall looking about in awe, thinking how the building was completely repurposed from its original use. Getting past my initial disappointment at not being inside the elevated water-tower next door (names can be so deceiving), I decided it was nevertheless romantic and mysterious to see a play in a space once filled with water. Even packed with theater-goers, the structure’s present usage was impossible to separate from its earliest purpose. It was wonderfully incongruent, like the hermit crab who’s outgrown his old digs and — lacking an upsize-worthy shell — takes up residence in a laundry detergent cap.

I felt this same sense of delight-in-the-unharmonious while viewing the works by Dallas-based photographers Paho Mann and Leigh Merrill, in Whereabouts and Hideouts, on view at the Museum of Texas Tech University in Lubbock through May 29. Centering on built environments, the exhibition, curated by Peter Briggs, features work by four Texas-New Mexico artists from the university’s acclaimed Artist Printmaker/Photographer Research Collection. Along with Mann’s and Merrill’s images are photographs by Rick Dingus and woodblock prints by Anthony Lazorko. The exhibit’s introduction explains, “Structures rise, are re-modeled, are neglected, and often turn into rubble. They are chronicles or time-capsules of our behavior and our priorities.” Grouped together, the images suggest a life-cycle of buildings, from birth to prime (Lazorko), to aging, death and decomposition (Dingus), to reincarnation (Merrill and Mann). 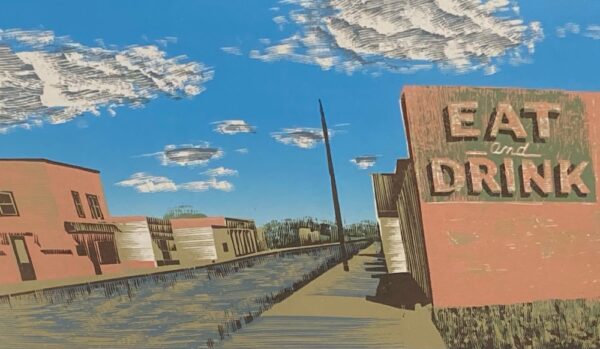 Anthony Lazorko’s American Regionalist images of diners, motels, and filling stations possess the haunting nostalgia of the road, as if we are alternating our journey between the anonymity of I-40 and the dusty remnants of Route 66. His scenes encompass the loneliness of Edward Hopper — they’re either inhabited by lone pairs of figures, or completely devoid of people — combined with the superficial glitz of Ed Ruscha’s Standard Oil paintings. And Ruscha-like, Lazorko’s works pair text with image; in fact, the text is as large-looming a character as the buildings themselves. (The same is true of Merrill’s and Mann’s photographs.)

Lazorko is himself a transplant from the Midwest (as former art director of the St. Louis Post-Dispatch) to Mesilla, NM. A nod to the romanticism of the Southwest, he backdrops his convenience stores and truck stops with fiery sunsets. Even his full-daylight scenes reflect a mythical sentimentalism. For example, the off-kilter shades of Pepto-pink and chalkboard-green in Eat and Drink (2006) stand juxtaposed against a cerulean sky. These colors, and the invitation to consume in this barren, tumble-down village, seem weirdly one-off, like watching a Wes Anderson film in slo-mo. 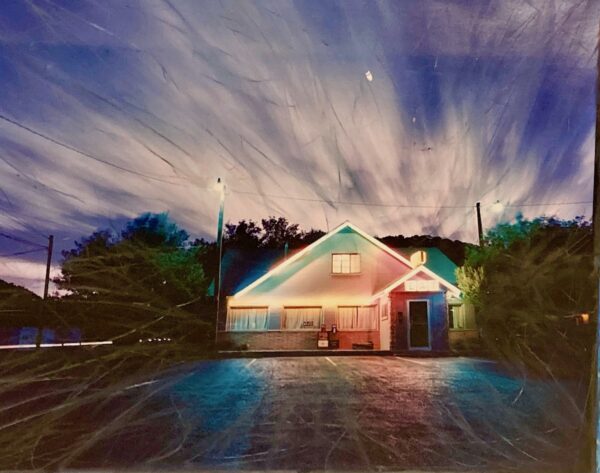 If Lazorko’s buildings are still in their prime, enjoying their original utility, Dingus’s are aging to the point that they look back with longing on their golden years. Like Lazorko, Dingus sets his buildings within natural environments; here, though, nature surrounds and anticipates, with the inevitability of a ring of buzzards awaiting the final death throes before closing in. The exhibition materials point out, “The exchange among economy, ideology, and landscape [serve] … as a nexus for exploring past and present.” It is this intersection of past and present, and of present and future, that we see in Dingus’s photographs: a nostalgic looking-back paired with inexorable looking-forward. In Neon Motel, Junction, TX (1992), an isolated structure, hemmed in by trees, throws out its carnival lights in self-defense. Here, as in Dingus’s other images, there are no signs of people. Humanity has relinquished these structures to nature, or soon will. Where there’s abandonment, ruin is sure to follow. 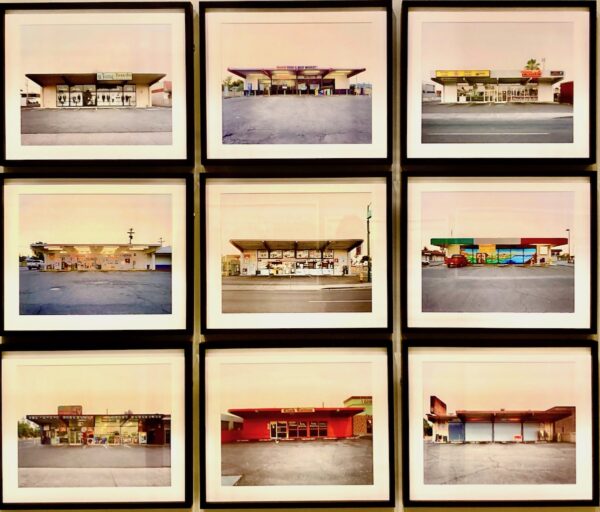 Or resuscitation, as in Paho Mann’s series Re-Inhabited Circle Ks (2004-2006). Growing up in the Southwest, Mann was intrigued by the second lives of Circle K convenience stores, which originated in El Paso in 1951. The grid-like presentation of his series evokes the repetition of Warhol’s Marilyn Monroes or Campbell Soup cans: the outer shells are duplicates, but there are variations. The effect is decentering and humorous, like nonuplets separated at birth and raised by different families, each reflecting different values and experiences.

Merrill’s images, meanwhile, depict the “urban-suburbanscapes” lining Texas streets, which she describes as “nuanced with desire, achievement, and personal aesthetics.” As with Mann’s Circle Ks, Merrill’s buildings — from her series Into the Sunset (2013) — are re-inhabited by businesses not original to the architecture. Jack’s $1.00 and Dallas Public Safety Supply, as enterprises, stand in opposition to the whimsical art-deco-faux-Spanish-castle architecture with which they live. We imagine the buildings as designed from a hopeful, aspirational place; but now, they are cynical, tarted-up, and wistful.

Leigh Merrill, installation view of Into the Sunset (2013)

Mann’s and Merrill’s built environments are rooted in memory. Aesthetic philosopher Jeannette Bicknell assigns the term “architectural ghosts” to built structures that no longer exist but can only be appreciated through left-behind traces like photographs, paintings, and memory. “Architectural ghosts can arouse sadness,” Bicknell says. “It is natural to feel regret, nostalgia, and a sense of loss for what one can appreciate now only through imaginative reconstruction.” While Merrill’s and Mann’s buildings aren’t quite architectural ghosts — architectural zombies is a better term — they do share the elements of imagination and nostalgia, as do all the works in Whereabouts and Hideouts. During my visit, another couple was in the gallery. The man walked along Merrill’s works, as if strolling down the street, giving his partner a tour of his hometown: “This is a machine shop I used to go to … over on Fair Park, owned by a guy named George, I think.”

In front of Mann’s work, the woman commented, “They should do this with Walmarts.” “Yeah, they do leave them empty, don’t they?”

We are uncomfortable with uselessness. If, as the exhibition suggests, our built environments are imbued with our desires and hopes, then it is natural that we want these buildings to live on through their continued utility, as we want for ourselves. Our built environments are supposed to be durable, stable, long-lasting. That they should be ephemeral — would have a life-cycle — only serves to remind us of our own transience.

Through May 29 at the Museum of Texas Tech University, Lubbock

Face to Face: A Look at Self Portraits...