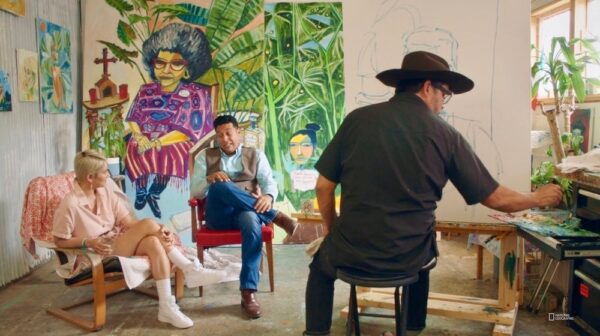 Cruz Ortiz at work in a still from the new documentary “Texas: Spirit and Soul”

National Geographic recently released a short documentary about Texas that prominently features one of the state’s best-known visual artists, Cruz Ortiz. Texas: Spirit and Soul is a 45-minute-long mini-doc produced by Nat Geo’s branded content studio CreativeWorks, and paid for by Travel Texas, a state government initiative that develops advertising, marketing, and research for the tourism industry.

Not all propaganda is art, as the old saw goes — aesthetically, Texas: Spirit and Soul is very well done. It packs legitimate cultural and ecological depth in its portrayal of the state, spotlighting less-hyped cultural wavelengths and steering clear of barbecue, rodeos, and other signifiers that disproportionately shape how outsiders see Texas culture.

The documentary moves at a steady pace from outer-Austin farm and brewery Jester King (with a cameo from regenerative farmer Sean “Peppy” Meyer) into brief but deep dives into fishing, birding, and trail-biking in different swathes of Texas. “Gulf coast soul” band The Suffers provide a closing number, and a vignette featuring Houston restauranteur Christina Ha gives a small glimpse into the cultural mix in America’s most diverse city.

San Antonio gets the most prominent city-level shoutout, however. Linda Ximenez, a Tāp Pīlam Coahuiltecan Nation Elder and Tribal Council member, shares an origin myth about the San Antonio river, the lifeblood of the city since precolonial times, and guides the camera through the Missions, the only UNESCO World Heritage site in Texas.

The documentary also visits the southside San Antonio studio of Burnt Nopal, the design firm of Olivia and Cruz Ortiz, as the latter paints a life-sized portrait of local nightlife entrepreneur Jeret Peña. Cruz discusses his longstanding practice of printmaking as activism in the city, nodding to the historical and cultural elements beyond Davey Crockett that make San Antonio unique.

All in all, Texas: Spirit and Soul is a well-made portrait of Texas that shows off some of its lesser-seen angles — something that may help update the monolithic idea about Texas that persists outside its borders. Stream it on Hulu.