An Art Review By An Interested Houston Seventh Grader 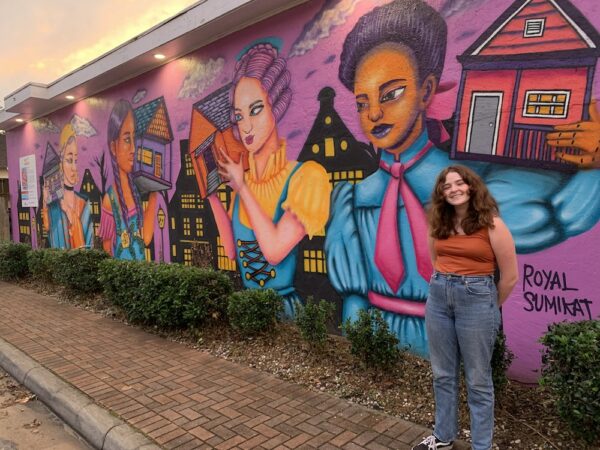 Note from longtime Glasstire contributor, Betsy Huete: As part of an initiative to inspire competition and rigor in arts writing in education, one of my student’s written pieces will be featured on Glasstire each year. The following review of a mural by Royal Sumikat is by Camryn Dallas, a seventh grader (at the time of writing) from Tanglewood Middle School in Houston ISD. For last year’s inaugural installment, please go here.

Houston is a vibrant city with art at every corner that can often blend together, but on the side of Henderson & Kane General Store (in the Old Sixth Ward), there is an eye-catching mural of four diverse women called Bringing Home With Us (2019). The four women depicted here are immigrants: Italian, Mexican, German, and African American. They are each holding upon their shoulders an 1800s style shot-gun house representing the burden and responsibility female immigrants endure picking up and moving their lives to America. Via symbolism, the Houston artist Royal Sumikat has done a wonderful job conveying the sense of strife and hope every immigrant faces.

Sumikat — from the Philippines herself — says the point of her work is to “strengthen the connection she has with her ancestors.” Mythology and highly contrasting colors are ever-present in her work, not only in Bringing Home With Us. She began her art career with mixed-media works. However, after she learned from a friend how to use spray paint, she was able to work on a larger scale, creating her best-known works to date.

The symbolism in this mural is brilliant. The women, all painted in many colors, are a huge contrast from the black buildings in the mural’s background. The buildings in the background represent the overwhelming anxiety, pressure, and unwelcomeness these women probably faced. Each woman holds a home, representing the burden and responsibility of their families. Yet they still stand tall and mighty. The color palette in this mural is of very high contrast, like most of Sumikat’s other work. It helps guide the idea that these women, who are so full of culture and vivacity, are facing the intimidating, dark background of their new environment. 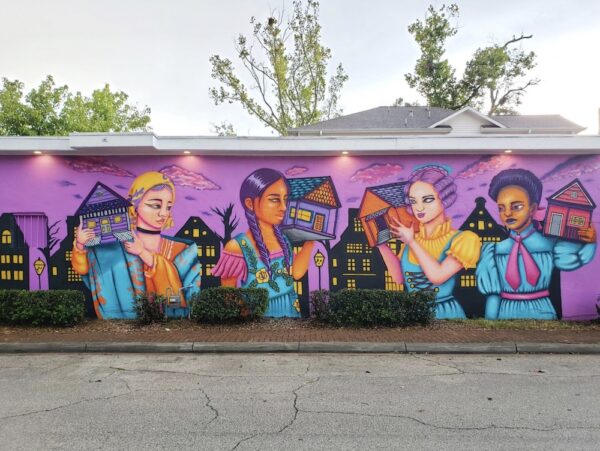 The women shown in Bringing Home With Us are different ethnicities: Italian, Mexican, German, and African American. The way Sumikat differentiates these women is by their historical clothing, which might not be noticeable to someone simply passing by. I feel that Sumikat could have used some other features to help add more difference to the women. For example, the houses they are carrying are all quite similar; I wish that she had used this opportunity to showcase different architecture types, instead of a shotgun style for all of the houses. Yes, the shotgun style house is reminiscent of Houston’s historic Sixth Ward, but these women are “bringing home with them.” Bringing their culture to a new place. Sumikat could have shown the homes they are bringing with them, and put more emphasis on the idea that these women are carrying their lives with them and displaying their uniqueness from one another. For instance, a Mexican house in the 1800s was not the same as a German house in the 1800s. Additionally, all of the women’s facial features are very similar; Sumikat might have showcased more diversity through their eyes and other facial features.

Royal Sumikat’s Bringing Home With Us does an excellent job of symbolizing the struggle female immigrants go through and have gone through. Though I wish she had used opportunities to make these women look less like the same person, overall, it’s a mural with a story and a purpose; a purpose adequately portrayed through symbolism and rich color.

Congratulations, Camryn Dallas, on your thoughtful review. You are a gifted writer and I hope you’ll continue to use your talents.

more of these please!

Impressive critique for such a young person! Keep up the great work!