Cowboys Don’t Shoot Straight (Like They Used To): Pacifico Silano at HCP 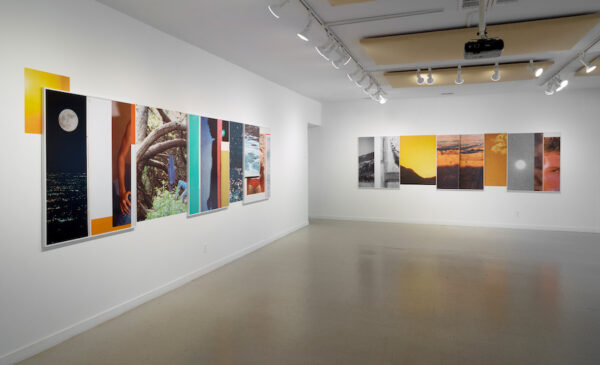 Rose rock, a geological formation found in deserts, and a pink flower called rock rose, interchangeably embody queer desire in Elizabeth Bishop’s “Vague Poem (Vaguely love poem).” These objects — one portraying a harsh and vast landscape, and the other representing soft, short-lived flowers — come to mind when looking at artist Pacifico Silano’s work. In his photographic collages, queer subjectivities and desires do not simply present themselves as given and approachable. Rather, they are unfolding, they are working to show themselves. Silano sees and untangles complex queer identities as well as feelings of loss and longing when utilizing imagery from gay vintage pornographic magazines of the 1970s and ’80s. What may seem to be serving one single purpose — evocation of sexual desire — expands into personal and communal histories, often neglected within the mainstream heteronormative discourse. 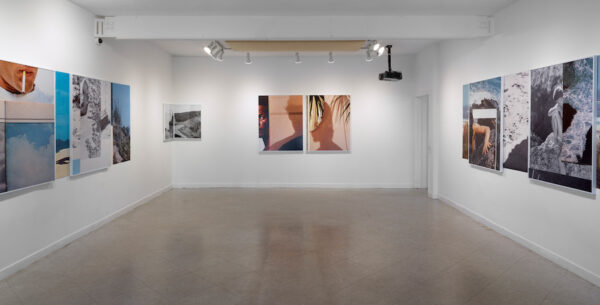 Silano’s preoccupation with photographs from around the height of the HIV/AIDS epidemic in the USA stems from his uncle’s death from complications of AIDS. Silano’s uncle was erased and forgotten in his own family, not unlike many HIV/AIDS victims. As Silano started to come to terms with his own identity, the story of his uncle attained both personal and political significance. To understand the history and politics behind such erasures as well as to access lives full of color, desire and tenderness are underlying motivations for Silano’s exhibition Cowboys Don’t Shoot Straight (Like They Used To), curated by Ashlyn Davis Burns of Assembly, on view from March 12–May 9, 2021 at Houston Center for Photography. 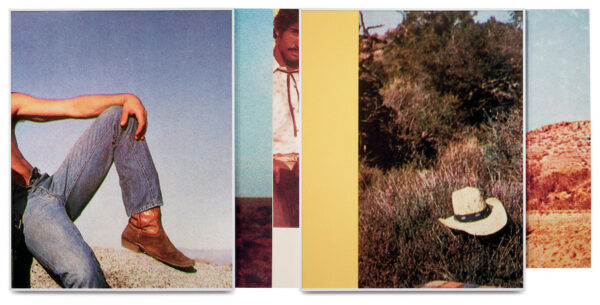 Silano is not afraid of messy and complicated photographic representations of the bodies encountered through his research. In his collages, we can see an interplay between the subversion of the tropes of masculinity, and the recognition that masculinity, in its toxic forms, can exist within the male gay culture itself. As Silano points out, “Many of the depictions on the pages of these magazines are a mock up of heteronormative masculinty. I think that there is an inherent sadness in that. It is not real, it is all part of a fantasy we are being sold. But sometimes we can allow ourselves to be seduced while still having a critical eye.” We can feel both seduction and a sense of criticism in Silano’s large-scale piece Ride The Wind, a collage depicting masculine imagery with the elements such as cowboy boots, hat, fit arms, as well as a rocky landscape. However, the central figure in the piece, placed in between the blue sky and a yellow magazine page strip, evokes tenderness. While heteronormative masculinity often presents itself as self-contained and dominant, Silano’s subjects are open, and thus vulnerable, to their surroundings, our gaze, and their own dreams. 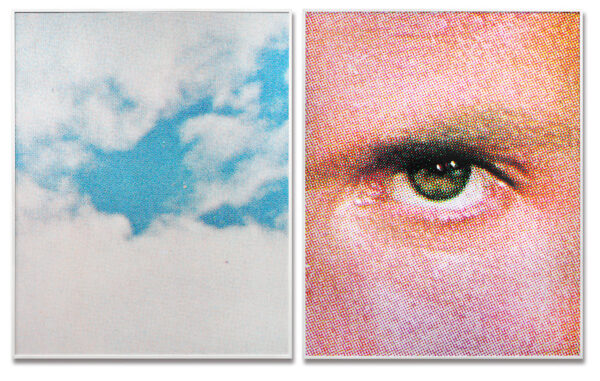 It is unusual to attain access to the interior world of pornographic actors as we look at their erotic respresentations. However, Silano’s work constantly oscillates between the depiction of outward (direct, confrontational) and inward (soft, dreamy) gazes. In the diptych Sure of You, we notice that the size of the human face coincides with the size of the sky. This pairing gives the body the enormity as well as intangibility of the sky. In this way, the body becomes a material of fantasy. And while the eye of the subject seems to be focused on its viewer, it also could be looking at the sky. The uncertainty positions us in between a subject’s daydream and the summoning of our own gaze. According to Silano, “So much about the work is a meditation on looking and the various cliches of printed imagery. I like using a photo of an eye to redirect a gaze.”

Pacifico Silano, How I Picture A Sunset, 2020

The phenomenology of gaze is complicated and multifaceted. This is what the late artist, writer, and AIDs activist David Wojnarowicz understood while driving through the days and nights of empty desert roads. “There is really no difference between memory and sight, fantasy and actual vision,” he writes. In Silano’s collage, How I Picture A Sunset, we witness this coincidence of memory, fantasy, and vision as the photographic subjects are juxtaposed with real landscapes that become shelters for queer imagination as well as existence.

Where fantasy is cardinal, landscape also takes the center stage. In another of Silano’s large-scale pieces, Nothing Fades Like The Light, bodies only exist at the edge of the collage. The desert sky, landscape, and the sun are bracketed by a face and a hand holding up a mirror. In this way, collaging and juxtaposing activate history and place, rather than simply presenting a subject existing in his milieu. Belonging is not assumed. We experience a dialectic of queer desire, and queer body, which are always already entangled in history and politics even in the most deserted of places. Silano’s abstract, often romantic depictions of landscape are never ahistorical. He reminds us that “There is a history of queer people leaving their small towns for big cities and in a way my work takes us back home. I am attracted to imagery that takes place under the sun, away from the familiar cityscape. I always think of the landscape images in my installations as a form of world making, a strange utopia of print matrix dots depicting the open sky and cliffsides, safe and full of possibility.”

Pacifico Silano, The Night Comes On, 2019

Nighttime, in Silano’s work, is in some ways like a desert landscape. It allows dissidence and more freedom to cruise. Playful elements of color and texture give the night vibrance of a bright day in the collage The Night Comes On. However, the presence of shadows and cropped bodies suggest veiled and threatened existence of queer bodies. Colors and light often overtake, even consume, the subjects in Silano’s work. The monochromatic colors of blue, bright white, and gray create a sense of continuum in You Make Me Blue. This merging of bodies, colors, landscapes, and textures alludes to being lost in longing, and also experiencing that split second in which you can allow yourself to let go completely. On color and light, the artist writes: “There is something inherently romantic and soft about the quality of light in these spaces that I draw a lot of inspiration from. Color is an important companion to my use of light throughout many of the installations. When used well, it helps tap into an emotional space.”

Silano’s collages create experiences like a moving image can — his photographic collages unfold with slow but generous speed. This process allows space for complex and at times unexpected depictions of queer bodies and histories, not reduced either only to trauma or to pure uninhibited desire.

Through May 9 at Houston Center for Photography.