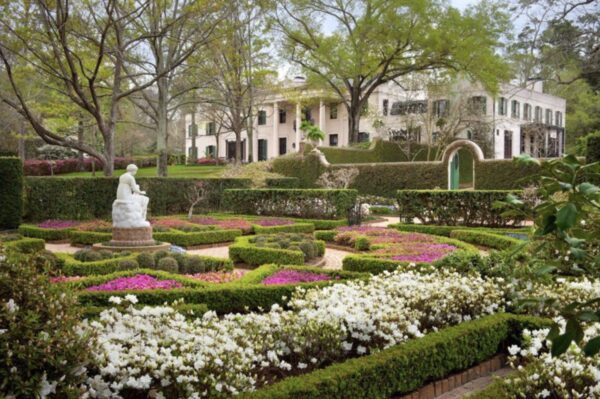 The MFAH’s Bayou Bend Collection and Gardens. Image via MFAH

On Tuesday evening, a pair of intruders broke into a branch museum of the Museum of Fine Arts, Houston’s system, the Bayou Bend Collection and Gardens, in the River Oaks neighborhood of Houston. The Collection houses American decorative arts and paintings, and sits on 14 acres along Buffalo Bayou.

According to reports, a man and woman entered the museum through a basement window grate around 6:45 pm on March 16. The alarm sounded, a security guard gave chase, and the intruders left through the a door on the museum’s south side. The police had been called, and spotted the pair running through some woods toward the Bayou, where the two hopped into a motorized fishing boat to make their escape.

When the intruders spotted police on the Shepherd Drive bridge, they turned the boat around and, ultimately, ditched the boat and disappeared into a storm drain. Police followed them but did not apprehend them. HPD also used a helicopter in the search, and called out a dive team.

The police recovered the boat, and, according to Houston’s ABC 13, “hope it will provide clues about the suspects.” The only description they’ve given is that both suspects have arm tattoos.

The MFAH is performing physical inventory of the building, and as of this writing it appears the suspects didn’t take or damage anything.

This sounds like something that might happen in Paris or Berlin. Not Houston. They broke in. They stole nothing. They had a getaway plan then they improvised. They had tattoos. There’s more to the story, I think. The authorities should question the Illuminati.