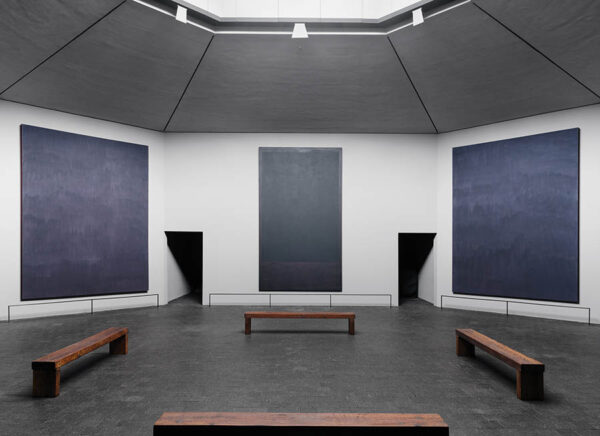 Initially commissioned in 1964, the Rothko Chapel was officially dedicated in 1971 after a fraught construction process and the tragic death of its namesake. As it approaches the half-century mark, Sotheby’s is assembling a panel of experts to discuss the singular building’s enduring legacy, its “50 years as a landmark of modern sacred art.” The discussion will be held as a virtual event today, February 4th, at 1:30pm EST.

The free webinar will consist of a conversation between BBC Radio presenter and University of the Arts London professor Shahidha Bari, Sotheby’s EVP and Chairman Lisa Dennison, curator and critic David Anfam, and Christopher Rothko, a writer and psychologist who has served as the custodian of his father’s legacy for the last 30 years.

As is noted in the event description, Rothko Chapel has a long history of serving as “a spiritual space, a forum for world leaders, and a place for solitude and gathering.” Nelson Mandela was given a Rothko Chapel Award and delivered a keynote speech there to commemorate the Chapel’s 20th anniversary in 1991. It has also persisted as a community resource harboring private moments of pan-spiritual, non-denominational reflection.

The Chapel enters its sixth decade with a fresh lease on the future. After closing in March 2019 for extensive renovations “to bring the space more in line with Rothko’s original vision,” the Chapel re-opened to the public last autumn. The Chapel, with its new skylight and renewed campus, was a Glasstire Top Five art pick on January 20.

“My father was always interested in the timeless, in those questions and matters in human existence that have enduring resonance,” Christopher Rothko stated in a preview of the renovation last September.“Walking into the restored chapel one cannot help but be swept up by the breadth and compass of his vision. We have followed that vision and allowed the chapel to speak, for the first time, with maximum clarity and resonance.”

The live webinar is free and open to the public. It will be streamed on Sotheby’s website today, February 4th, at 1:30pm EST.