The Zen of David 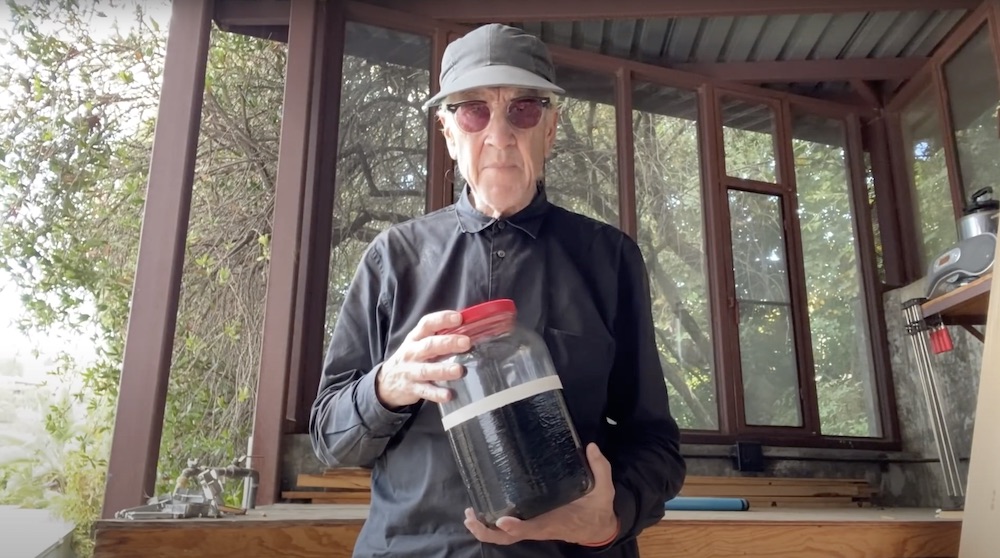 It is not outré anymore to say David Lynch is your favorite filmmaker and artist. The infernal machine of Eraserhead, the erotic death trip of Lost Highway, the true pixelated nightmare of Inland Empire — have always had some cachet. But Lynch has been canonized now. Previous works deemed failures — Twin Peaks: Fire Walk With Me was regarded as one of the worst movies of all time by critics when it came out in 1992 — are now widely accepted as unequivocal masterpieces. Even his adaptation of Frank Herbert’s legendary sci-fi tome Dune, a deeply awkward movie that begins with 15 minutes of backstory exposition by a disembodied head, has its fierce defenders.

It’s been a strange, circuitous, Lynchian journey. After Inland Empire (2006), perhaps the darkest, most terrifying film of his career — a film so slow, experimental, and nightmarish that it could easily be situated next to Bela Tarr’s Sátántangó or the video art of Ryan Trecartin (who is undoubtedly deeply indebted to Inland Empire) — Lynch would not make another film or narrative piece (he released a few fun doomer-drone rockabilly albums) for 11 years. During that time he became increasingly involved in the Transcendental Meditation (TM) movement, ascending to senior leadership with his David Lynch Foundation. 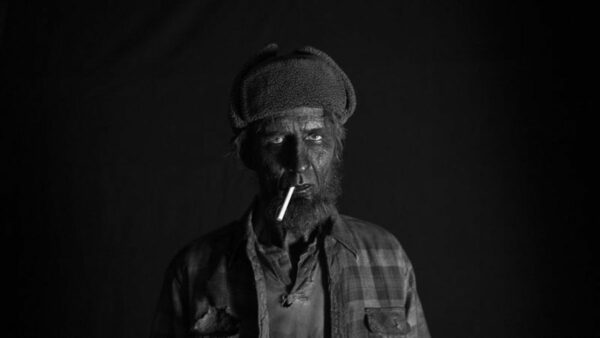 Still from Twin Peaks: The Return episode “Got a Light?”

This development had a particularly wry and bitter resonance with me. I was raised in the TM movement, which espoused that negative art had a negative effect on one’s soul. I was admonished for loving Blue Velvet, Wild at Heart, and Lost Highway. And then the creator of such twisted visions became the leader of TM. Only in a David Lynch film. I remember around 2012 or so feeling profoundly sad that there would be no more David Lynch films; he had become a monkish sage in service of the spirit over stories. But then, Twin Peaks: The Return, an 18-hour epic, debuted in 2017. This was an astonishing development, made all the more so by wildly exceeding even the loftiest expectations. The Return is the greatest season of television of all time, containing the single greatest episode (“Got a Light?”), a work in league with tour de-force epics like Berlin Alexanderplatz, Fanny and Alexander, Stalker, and the Apu Trilogy. It is its own cosmos, as finely wrought as it is expansive.

It is fitting that a work in the Twin Peaks series is perhaps Lynch’s masterpiece. Twin Peaks is Ur-Lynch; all the elements we love in this universe are on prominent display — the aestheticization of American 1950s nostalgia, the slow-motion absurdity, the profound and boundless articulation of true evil, the earnest romance, the melancholia at the endless rippling effects of pain and trauma. And so, I think, that might be it. The Return may be his final statement. I hope I’m wrong, but it’s hard making movies these days — especially the grand, strange epics Lynch dreams of.

Instead, we are now in the phase of Grandpa Lynch. He has, like Bill Pullman’s acid jazz saxophonist transforming into Balthazar Getty’s auto mechanic in Lost Highway, Lost-Highwayed himself into his Twin Peaks character Gordon Cole. Cole, the endearing and nearly deaf FBI boss, is Lynch’s funny and cheerful take on the American (white) man of authority — good-natured, but almost incapable of comprehending the world around him without tremendous assistance. Lynch’s “real world” Cole appears in his hilarious short film from 2017, What Did Jack Do?, that now streams on Netflix. In the film, Lynch plays a police detective, and voices the suspect, a capuchin monkey, as well. It’s virtually impossible not to chuckle in bliss to the stentorian, Plains and Mountain West honking of two Lynches in dialogue. “Whose going to believe an orangutan!?”, the monkey, Jack, scornfully barks. “Maybe a jury, big boy!” Lynch’s detective volleys back. This is heaven.

On the David Lynch Theater Youtube channel (with 182K subscribers) Lynch does a daily weather report, and a number of the day. Like Cole, he’s always nearly shouting, as if he were broadcasting from inside a bathysphere. Each day is more or less the same and somehow always refreshing and soothing, like the sound of Tibetan chimes. “Swirl the numbers!” he roars in one number-of-the-day installment. “Today, I’m thinking of heat!” he muses in a weather report.

What is the purpose of this “theater”? Obviously it serves as a kind of spiritual and creative lottery reading, not unlike John Cage’s use of rolling the I-Ching for guidance on compositions (and literally every other aspect of his life). There are, I’m sure, artists who are using the number of the day to choose the code of the next color they will paint with, or for the sequence they use  to program their synthesizers. Lynch is the shaman of random chaos, and every number rolled or temperature read could be of great significance, or mean absolutely nothing. Or in the magic of Lynch’s world, both simultaneously at all times orbiting each other in a waltz.

Lynch is a great believer and evangelizer, through his art, of the power of repetition, circling, zooming. From 1983-1992, he had a comic strip in the LA Reader called The Angriest Dog in the World. It was always the same four panels, week to week. The caption read: “The dog who is so angry he cannot move. He cannot eat. He cannot sleep. He can just barely growl. Bound so tightly with tension and anger, he approaches the state of rigor mortis.” The four panels show the dog, in a yard, straining, enraged, throughout the day and into the night. The one change is different speech bubbles coming from inside the house. For example, one reads: “If everything is real … then nothing is real as well.” 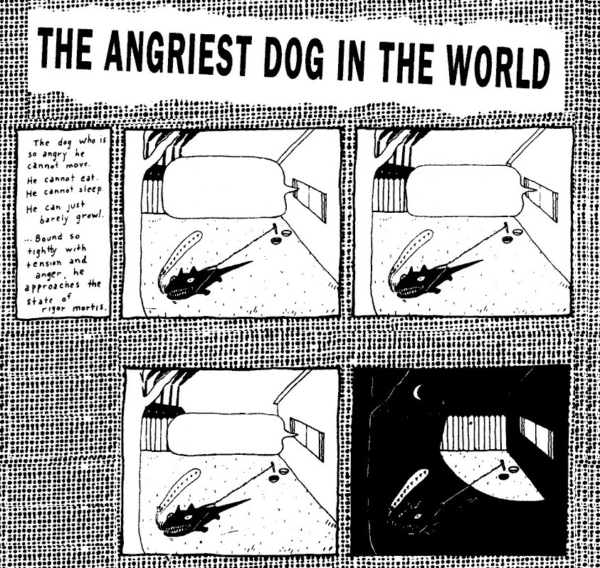 One possibly apocryphal story about The Angriest Dog in the World: Lynch, after the success of the Blue Velvet, passed the strip off to another artist (the idea was to draw a new identical strip every week, with a new speech bubble), who grew bored doing the same four panels over and over and quietly began to add details to the yard, etc. When Lynch discovered this, he was furious. “You’re ruining it!,” he told the artist before taking it back. Is The Angriest Dog in the World a meditation on the possibility of transcendence in the Sisyphean struggle of existence, or a jape about the strange, theatrical futility of it all? The answer, I think, is yes.

Lynch above all likes the zone-out. In 1996, on the centennial anniversary of the Lumiere Brothers’ influential short film Arrival of a Train, a variety of filmmakers were given the Lumiere camera with the corresponding minute-long reel of film to shoot. Unsurprisingly, Lynch’s Premonitions Following an Evil Deed is the best of the lot — a phantasmagorical, alien murder mystery with more ideas and visual suggestions in a few seconds than most movies have in two hours. In the documentary about this project Lynch serenely explains: “I love to dream in the dark.”

That is, throughout his remarkable, unpredictable career, the Zen of David: to dream in the dark. And he always finds a way to dream with everything through aesthetics and tactility. It all becomes a droning portal: the swirling of ping pong balls in a jar, the zoom in on a severed ear and the ants devouring it, vomit on the floor of a flea-bitten Texas motel, brains and viscera, the roar of an engine on an empty night road, the whir of an airplane cabin. A music critic once described attending a John Cage symphony made up of cacophony, found sounds, and chaotic rattling, and feeling irritated. But upon exiting the performance it was as if his ears had champagne corks in them, and were popped — the sounds of the city became a symphony in unfathomable harmony. Lynch engages in a similar alchemy; he is the redeemer of monotony. So in this age where things seem to be sputtering to some end with one catastrophe after another, Lynch’s youtube Theater — of x-raying the plaintive and everyday, and finding the ancient and alien skeleton that can’t ever be fully be explained — does, for us sinners, feel like old-time religion.

I’m woefully ignorant of most of Lynch’s work. This piece gives me some footing to get into it. Thank you!

HD: Maybe don’t watch right before bedtime, and keep your child out of the room when you do watch. 😉

Thanks Neil
Another amazing walk through the art of our times.
looking foreward….
Ken

I’m glad to read this. Lynch’s weather reports are strangely soothing and uplifting (and short and manageable). I like when he says “Today I’m thinking about…” and his chipper sign-off, always accompanied by a wave, “Everyone, have a great day!” I like to think this is Lynch offering encouragement to his viewers. I feel encouraged, anyway. Terrific pandemic art.

Also it’s very Lynchian to do a weather report from LA, where the weather is always pretty much the same (and the weather of which most of his viewers, myself included, don’t care about day-to-day). And the small eccentricity of giving the temp in Fahrenheit and Celsius both. It’s wonderful.

1. Once upon a time I left a “sculpture symposium” to watch Blue Velvet three times in a row at a Houston theatre.
2. Wild At Heart is unfairly maligned.
3. Mulholland Drive is brilliantly structured along the lines of inserting your hand deep into a sock, grasping the toe, and pulling the rest of the sock back off your fore arm, while still holding on to the toe. With the sock toe being the blue box.
4. What, no mention of Donovan?

Wow. Some of the best writing I’ve ever read,& the most exciting cross-references I have read. I can imagine David Lynch would be in a state of glee after reading this. Bravo. Thank you.

Ditto to what Kathleen McShane said. This article is fantastic and wildly creative and beautifully descriptive. Clearly, its the work from a writer that LOVES to write. There’s giddiness at every sentence. Looking forward to more from Fauerso.

Your writing so vivid captures the essence of Lynch’s work. When I was teaching at UPenn in Philly in the early 2000’s, the art department and neuro science dept teamed up to bring Lynch to speak on campus. The theater was packed with over 500 people. Lynch at the time was deeply entrenched in TM and had already started his foundation. I remember being so frustrated (as were my students), because he refused to speak about his art or film work at all during the entire presentation. He used it as platform to promote the benefits of TM. Of course the neuro folks were stoked, because they had been studying the effects of TM on brain activity and Lynch validated their findings. In looking back at the evening, it was surreal Lynchian experience, defying all expectaions.