Deconstructing Machismo (and Then Some): A Chat With Jose Villalobos 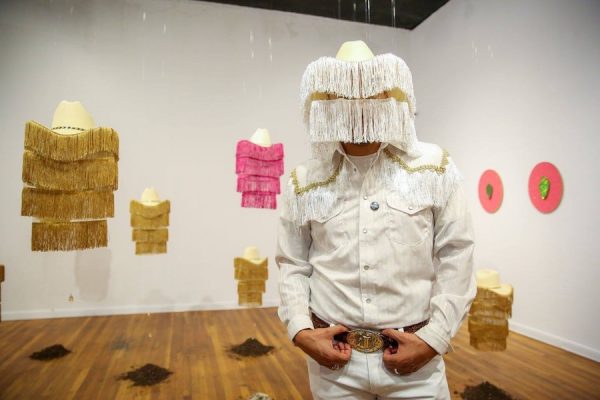 Jose Villalobos has become a fixture in the San Antonio art scene. His references to the machismo in his own Norteño culture are the foundation on which he bases his practice, in order to use the images and behaviors of the macho to subvert it. His challenge to machismo is an outspoken critique of the behaviors of our culture and the systemic justification of them. In a culture where machismo is often “performed,” Villalobos turns this performance around, using it while criticising it — taking on the visual language and codes of his identity in order to question it profoundly.

Villalobos and I recently shared an exchange for Glasstire about his process. 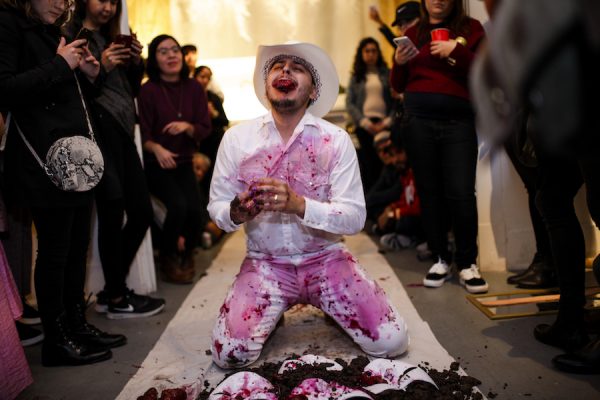 Leslie Moody Castro: You work with identity in very multifaceted ways, playing with Norteño culture, machismo, marginalization in both “otherness” and sexuality. How do all of these things intersect for you? And can you tell our readers a little bit about the Norteño culture you reference?

Jose Villalobos: Being raised in the border between El Paso TX and Ciudad Juárez MX, I was born into the Norteño culture. Norteño refers to someone whom is from the northern region of Mexico, but it is also a movement and genre of music. In my work I refer to both.

Both my father and mother were raised in a very traditional and conservative manner in the northern region of Mexico, eventually making their way to Juárez, then migrating to El Paso. My father had a long history with music playing in Norteño bands. Naturally machismo made its presence in the culture of our family. I would see the way the men handled situations, and simply the way they acted in a domestic space and public settings. At a young age I knew I was different and that difference was “wrong.” Growing up in an extremely religious household my ways of thinking and acting were unholy; I repressed them and when I did something that was considered flamboyant I was often corrected on how to act and say things in masculine manner. 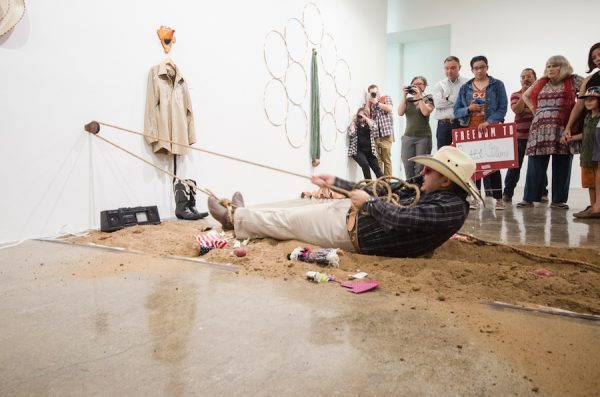 LMC: Can you offer an example of how men would act? Some anecdotes you’re comfortable sharing?

JV: Some examples I would see is being demanding to women; often correcting the boys on how they should act more masculine; they would walk in public with a “tough” strut.

LMC: How do both performance and objects work together in your practice?

JV: I often use objects that are prominent in my culture, as well as objects that carry a symbol of power. Sombreros, belts, boots… all these objects empower the macho. To be able to deconstruct that machismo and toxic masculinity in a performance is a way of protesting machismo and reclaiming my mariconismo as a queer norteño in the struggle for acceptance and support from my own culture.

LMC: Let’s define some terms for our non-Spanish-speaking readers: How do you translate machismo, maricón (or mariconismo), or norteño (geography is often relative).

JV: Machismo for me translates as toxic masculinity. Maricón is one of many derogatory terms for a homosexual, but its equivalent is ‘faggot.’ Mariconismo is more of a made-up term, such as ‘faggotry.’ Norteño is definitely related to geography, but specifically in Mexico norteño means northerner.

LMC: Why has performance become such an important part of your practice? How does performativity strengthen your practice or exploration of identity issues?

JV: Performance captivates an audience in a different manner that other work may not be able to. When I first encountered performance I felt the power and impact that it can create. But I feel that there is another layer to my performance. Observing and studying these men and how they act in certain settings is almost like watching a performance itself,  as though they are also performing — almost as if they are different personalities and identities. My performative work creates an avenue in my practice that further explores and deconstructs marginalization in the LGBTQ+ Latinx communities.

LMC: Does this refer back to the ways in which you saw masculinity performed?

JV: Yes, masculinity was performed differently in different settings. For example, in the comfort of their own home they would show more affection to their wife and kids, but in public it became different — less affectionate, because a man is supposed to be tough. 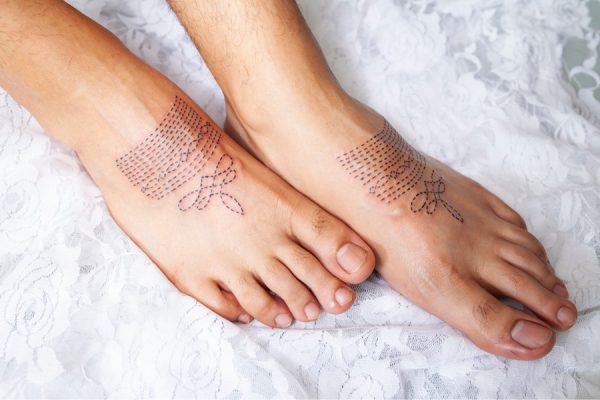 LMC: I see part of your practice as also being unapologetically from all these cultures you are referencing, criticizing, then reinserting your voice and practice into. Talk to me about how advocacy also plays a role in your practice.

JV: ‘Unapologetically’ is correct. I feel that almost no one challenges machismo in the Latinx community because it’s instilled in our upbringing, so it becomes a custom and we become used to it. I feel it’s important to be an advocate and speak up. We have a voice and we need to learn how to use that voice to our fullest extent. Through my work I can create awareness of the homophobia and toxic masculinity that exists in our place of being.

LMC: How has your family reacted to your work?

JV: Reactions have varied; sometimes they don’t quite understand it, maybe they refuse to look further into it. I can definitely see a difference in how the women in the family react compared to the men, which is more of a non-verbal, physical reaction that’s kind of hard to explain. It’s almost as if they show no interest, but then they still ask about it — ha ha.

Great article jose villalobos i applaud you keep up the great work.