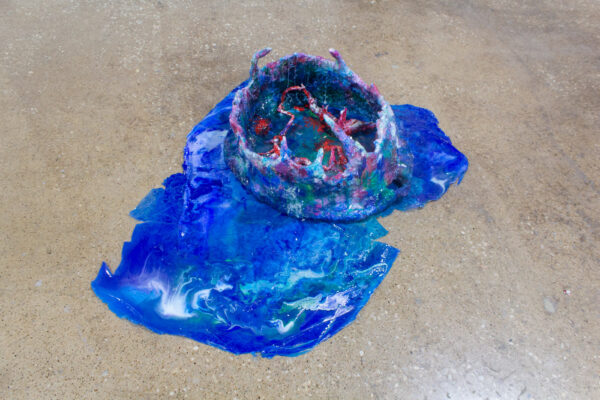 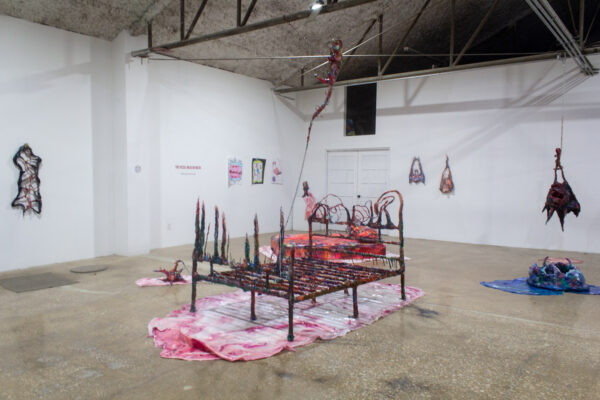 Narong Tintamusik, “This Vessel Holds No Water,” installation view at 500X in Dallas

Hot off his recent exhibition in Lufkin at Angelina College, Narong Tintamusik’s offerings at 500X Gallery showcase the recent developments in several bodies of his sculptural work. The centerpiece is a bed frame coated in the waxy red and purple palette that Tintamusik has made his own over the past few years. An unadorned mattress, also red and slippery looking, is askew nearby. While it’s Tintamusik’s largest sculptural work to date, there’s still more in the show that he has been developing. His wall sculptures are continuations of wearable necklace pieces that were on view at Ro2 Art downtown last year. Here, they have grown into echinoderms: the radially-symmetrical marine life that lives on the floor of every ocean.

“I didn’t want the pieces to be grounded within the world we live in, so I think having the micro environment to it kind of does that,” said Tintamusik.

Tintamusik’s recent work, as laden with disturbance as it is, has taken on biogenic forms appropriate to his oeuvre. Given his creative growth spurt and promise, I suggest catching this show before he sculpts at an even bigger scale. 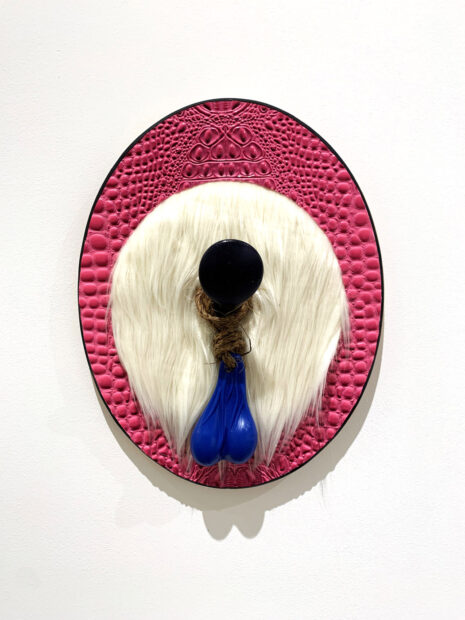 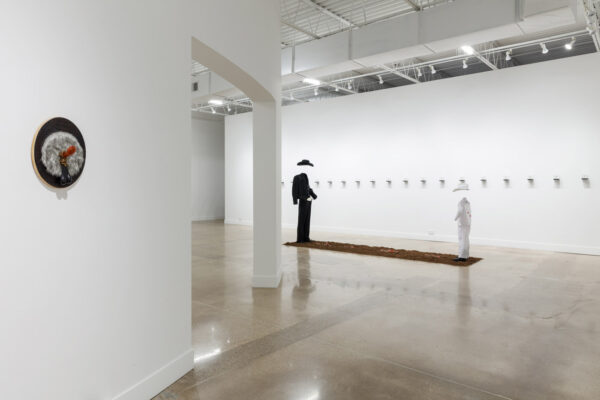 I asked Villalobos if he had cast the fluorescent, colored truck nuts, all eleven of them, displayed in Something To Hold on to. In each piece, resin saddle horns emerge from a plaque layered with faux-reptile skin and brightly colored fur. Villalobos told me, to my surprise, the plastic baubles hanging beneath were purchased from Amazon.

Villalobos is a tenacious sculptor and serially develops works using leather, textiles, automotive parts, and cultural symbols. This show adds “Human Fluids” to that list of materials. The Semillas vials are the quietest pieces on view, almost uncolored, mostly transparent. Glass vitrines encase the vials, and they maintain a quiet but guarded presence. I was confused by them at first, but I realize now they are deliberate; the most potent materials require the least dressing.

Villalobos is asking hard questions about the viability of male identity under the calculus of cultural traditions and societal value, like what happens to a lineage when no more children are produced. His ability to marry sculptural exploration and difficult cultural truths has finally made its way to a Dallas gallery, after having a prominent place in the San Antonio scene. His schedule is now getting hectic; this year, he is installing work at museums in Phoenix and Kansas City. Who know’s when he’ll be back, so be sure to see the show.

Choppy radio broadcasts and red lightning dimly spark and sputter in the distance. Martínez Garay has animated a certain kind of desolation, one that references school furniture and radio towers, in allusion to the Pervuion “internal conflict” between the Government and Maoist rebels in the ’80s and ’90s. A statue of Jesus is seen only from behind, and in snippets at that. There is much to ponder about this scene amid collapse and darkness, though the signal has grown faint and unintelligible. This audio-visual work is a “minimal experience” (as stated by the exhibition text), and yet it commands Artpace’s upper-floor gallery.

After seeing Ayataki, I dreamt of earthquakes, the kind that make global news. All elements of this piece are digitally generated, and in service to the evasive, uneasy tone that Garay inflicts with this video work. 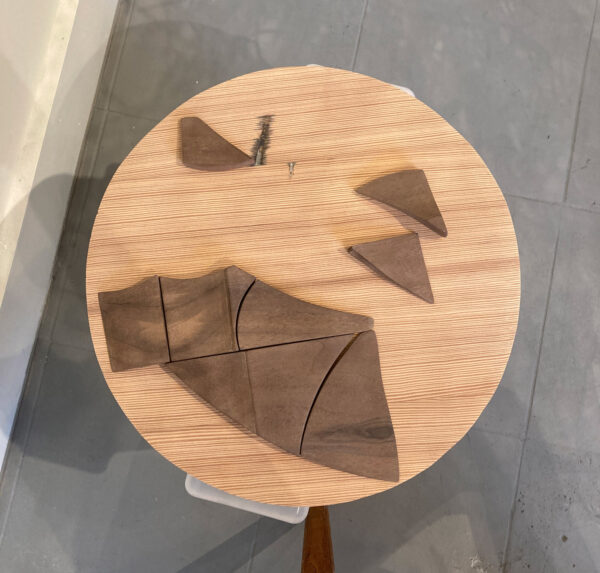 “Puzzle” by Jesse Cline, on view in “Fitting” at Northern Southern in Austin 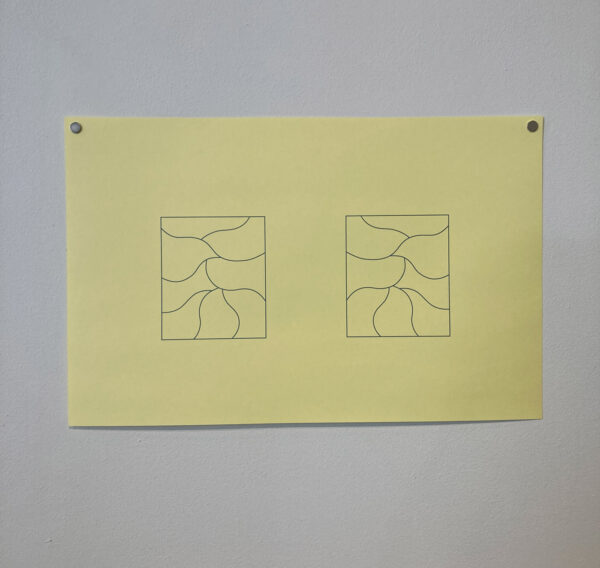 A work by Jesse Cline, on view in “Fitting” at Northern Southern in Austin 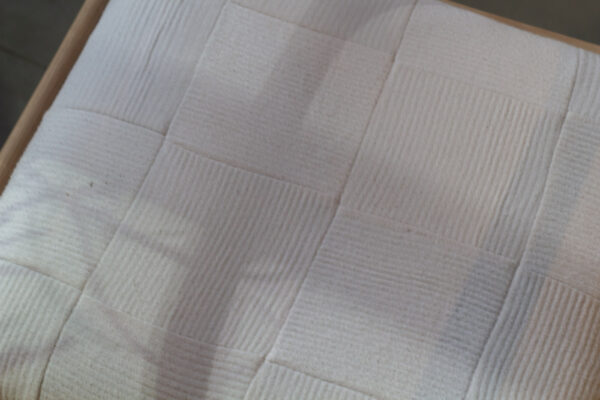 Detail of a sculpture by Michael Muelhaupt, on view in “Fitting” at Northern Southern

The members of the Austin sculpture collective Partial Shade have assembled living room accouterments in this gallery that used to be a residential apartment. The space is a rectangular cubicle, tight and unassuming, in downtown Austin. The group of artists have dressed it handsomely with plants (Starbuck), furniture (Muelhaupt), and a few graphic applications, which may be referred to as “puzzles” (Cline).

A series of chairs of varying designs are disingenuously custom made, using materials sourced from Craigslist, many of which have circulated across Austin through their various life cycles. I asked the artist, Michael Muelhaupt, about working with objects that have a storied past:

“Like family history, there’s a lot of unreliable narratives. When you buy things off of Craigslist, you’re only getting fractions of stories. The first person narrative of how a thing came to be is always kind of questionable. You never know if they’re telling you the part that makes it a better story.” 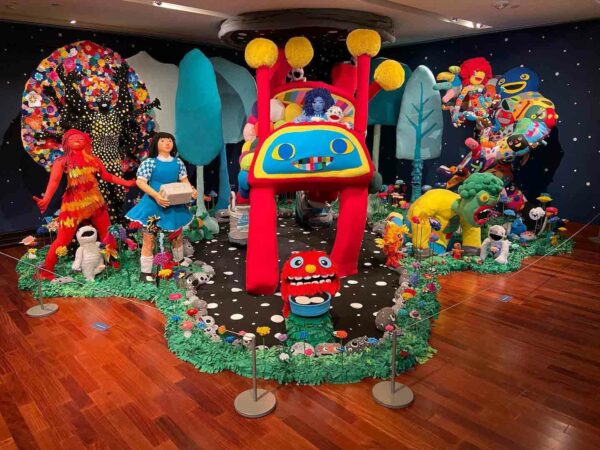 Work by Jooyoung Choi installed at the Crow Museum of Asian Art in Dallas, Texas. Photo by Jacqueline Chao, via the artists website

Jooyoung Choi: Songs of Resilience from the Tapestry of Faith at the Crow Museum of Asian Art in Dallas, February 12–September 4, 2022

The fanciful installations of Jooyoung Choi are well known to Houston, where her work has been exhibited at Aurora Picture Show, the Contemporary Arts Museum Houston, and nearby at the Art Museum of Southeast Texas in Beaumont. At last, North Texas has been given the opportunity to see her expanded creative universe of video, painting, and puppetry.

This is the final installment of the Crow Museum’s Texas Asian Women Artist series, a selection of long-term exhibitions which has included Austin educator Beili Liu and Dallas-based Kana Harada.

The install here is a comprehensive look at the characters and universe that Choi has created, complete with didactics offered by the Crow Museum to illustrate their stats, akin to the look of trading cards. This exhibition is a great example of an artist using craft to explore the language of pop-culture media, without leaning on preexisting intellectual properties (such as Marvel or Disney films and characters). Seeing the world that can come from one person is a best-case scenario for an exhibition experience: inspiring.

All images are by William Sarradet unless otherwise noted.