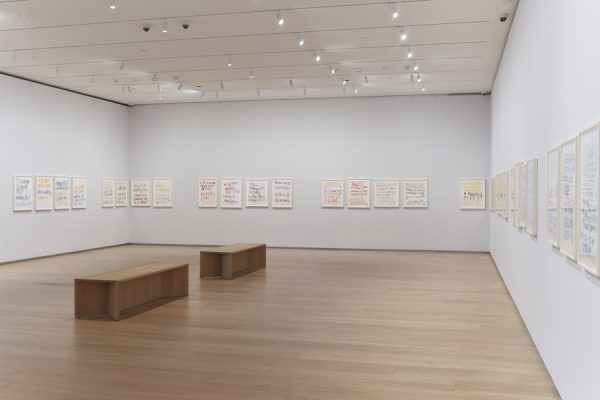 The current installment of Roni Horn’s two-part drawing exhibition, When I Breathe I Draw, Part II at the Menil Drawing Institute in Houston offers viewers an opportunity to think about how the phenomenon of confusion, doubt and uncertainty, now referred to as the “post-truth condition,” manifests in the recent history of contemporary art. Comprised of five bodies of work in drawing, photography and collage, Horn’s work here probes this same skeptical foundation of confusion, doubt and uncertainty.

Horn is part of a generation of artists influenced by the arrival of French Deconstruction to New York in the 1980s and ’90s. Deconstruction is a recent version of ancient Greek skepticism. This ancient view holds that because sense perception is unstable and subject to illusion, apprehending reality through the senses is impossible. The most radical form of this attitude suggests that external reality doesn’t even exist apart from the senses that create it. Deconstruction updates and reinforces this philosophy by claiming that truth and reality do not exist apart from language. Words do not correspond to a separate, external reality; they create that reality. 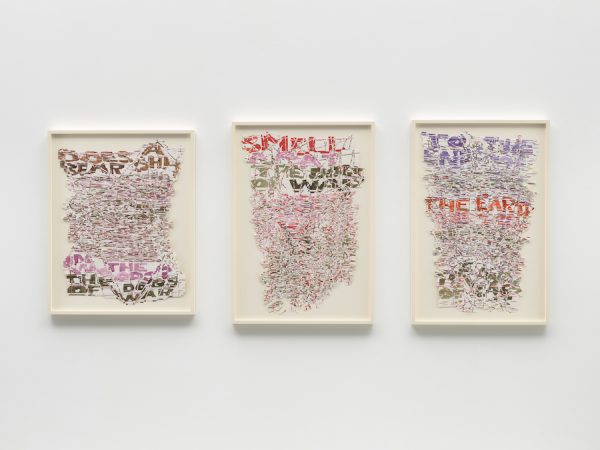 Roni Horn, The Dog’s Chorus. Let Slip to the Ends of the Earth, 2016. Watercolor, pen and ink, gum arabic on paper with tape. Courtesy the artist and Hauser & Wirth. © Roni Horn

Horn’s linguistic skepticism is most convincingly embodied in two related series: Th Rose Prblm and The Dog’s Chorus. In these drawings Horn intersperses visually fragmented idioms and colloquial phrases with sliced and diced phrases found in the writings of Shakespeare and Gertrude Stein. Horn literally illustrates the Deconstructionist claim that language and the reality formed by it crumbles and slips through our fingers when we examine it closely.

Following Horn’s drawn and collaged text across the page, words and phrases intermingle nonsensically, break apart, lose their relationship to language and become more and more fragmented until they dissolve and drift away toward the edges of the frame. Horn implies that neither the writer nor the reader has control over the meaning of a text, because they have no control over the infinitely fragmenting meanings of words. Packed one after the other into the largest gallery of the Drawing Institute, these two series are intentionally repetitive and numbing. 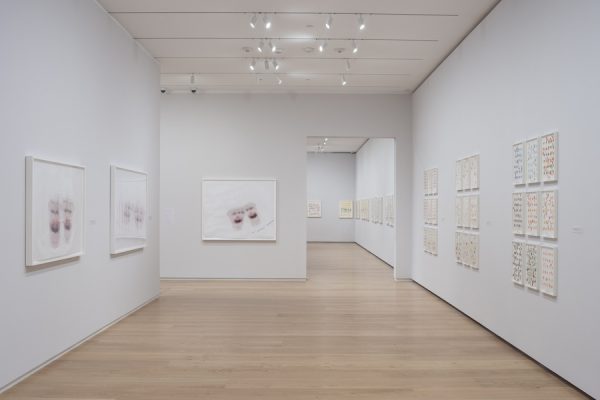 Doubt and confusion breed more doubt and confusion. Horn’s repetition mirrors the cognitive despair into which the reader slips when they begin to doubt the meaning of every word on the page. Consulting the dictionary for the definition of an unknown word, the reader discovers that definition is comprised of more words. But what do those words mean? Has their meaning changed over time? Words lead to more words. When the reader begins to doubt the common meaning of words built up through traditional use, they wander further away not just from language, but from the reality that language describes.

This is a seductive idea. But is this really how language works? Meaning can be lost and distorted over time and with intention. Clarity is essential to communication. Literary study can never afford to skim lightly across the surface of language. But does language really finally disappear layer by layer into primal incomprehension? The conclusions of a certain kind of hairsplitting logic do indeed imply that any linguistic proposition is an illusion when every word in that proposition is uncertain.

But for Horn’s subversion of language to work, she must rely on the fact that language has meaning. Her text drawings are only effective to the extent that the viewer is confused and frustrated by their lack of legibility. It may be true that the effective correspondence of language to an external reality is mysterious. But just because a thing is mysterious doesn’t mean it isn’t real. Linguistic skepticism seems to embrace uncertainty, but it can also be understood as a reactionary response to uncertainty. Faced with a mysterious thing like the inexplicable meaningfulness of language, the skeptic can deny its meaning. 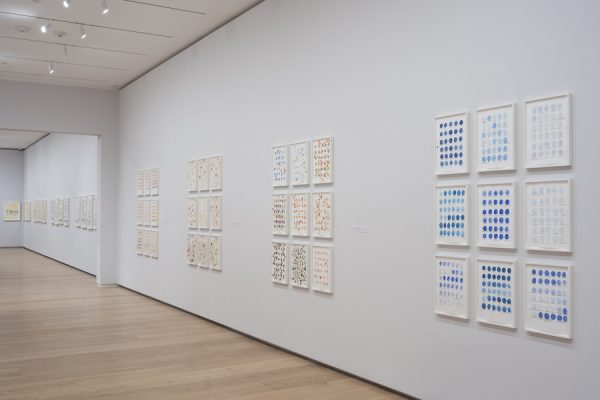 Horn’s Remembered Words drawings also circle around the claim that language systems are ultimately meaningless. Here circles of gouache and watercolor are painted in what seems to be a systematic color scale. On closer inspection the colors don’t correspond to any recognizable scale of color or value. If the color isn’t randomly applied, then it’s applied according to a private system Horn intentionally withholds from the viewer. This doesn’t mean there is no system, or that systems don’t make sense. It just means that the viewer doesn’t have Horn’s key.

Each colored circle is labeled with a handwritten word. The viewer struggles to reconcile the system of colored circles with the words. Sometimes one word will roll into the next and a vague sense of meaning seems about to form. But any reconciliation of one word to another or the words to their corresponding color is ultimately frustrated. Quoted in the exhibition brochure Horn says, “The words have no context. They are someone else’s recall, present as evidence or residue of something the viewer cannot know.” The fact that Horn has stripped her words of context in an act of obfuscation implies that these words previously existed within a context that gave them meaning.

Horn’s other works in the exhibition argue the same essential point: the pursuit of truth through knowledge is a quixotic endeavor. Her cut and reassembled maps of Iceland pit topography against emotional devastation. Hand-written across the bottom of one map is the plaintive declaration that “I think about life: all the systems that I shall ever construct and never equal my cries.” Does emotional agony negate topography? Horn’s cut and reassembled photographs of clowns seem to affirm the popular understanding of human identity as inherently chimerical. Human identity isn’t just buried under a smiling mask — it’s fragmented all the way down.

I believe Horn suggests that the nature of language, and the truth claims people make with it, are not imperfectly understood, but unknowable. But if so, what is the purpose of language? The same Greeks who introduced skepticism to thought answered this question. Gorgias, an Athenian skeptic wrote, “The power of Logos [language or speech] has the same relation to the soul as the order of drugs has to the nature of bodies…some Logoi [types of language or speech] cause grief, others joy, some fear, others render their bearer bold, and still others drug and bewitch the soul through evil persuasion.”

Language can be seductive or inflammatory, inspiring or despairing without containing a shred of truth. Emotional language without truth is rhetoric, and rhetoric is a tool of manipulation. Every politician knows that confused, uncertain people who doubt reality are easy to control. The Deconstructionist project of dismantling language and denying truth is ultimately concerned with the pursuit of power. Truth is only ever partially visible, but reason requires its existence as an ideal. Human language is the form in which that ideal is expressed, and when it’s destroyed, the only thing left to take its place is force.

On view at the Menil Drawing Institute, Houston, through Sept. 1, 2019

The show BTW is excellent, as was its outstanding immediate predecessor. One of the best (pair of) exhibitions I’ve seen in Houston in a long while. I enjoy explorations of systems, and the works were all visually compelling.

The entirety of work was a series of aesthetic systems of themselves, with their intricate woven interactive patterns of cuts and reassemblages making the art-maker in me wonder much more about what her daily activities in making the work might have been than what her intellectual motivations may have been. (A sentiment I know from interactions with others is not mine alone.)

(I mean here the works other than the gouaches, which were explicit in their exploration of system, and in my opinion less powerful because of it; the more inscrutable and inaccessible the narrative, the more visual the interpretation of the work must be.)

But what I really want to know is why artists, curators and commentators purport to concern themselves so heavily with the power of language, and dedicate major artworks and exhibitions to it on one hand, while supporting the sale of steel replicas of inflatable bunnies on the other.

Steel bunnies would have nothing approaching the immense financial and cultural power they currently do if it weren’t for the power of words to spin power not from truth, as you nicely pointed out, but from sheer, whole nothingness. I wonder what Horn (and any of the Deconstructionists) might have to say about that.

Rhetoric is not necessarily a bad thing.
You make it sound as though untruth is always a feature of rhetoric.
Rhetoric can be deployed in the logical explication of apparent truth as well, though it is also meant to persuade, generally speaking.
Horn’s exhibit is probably beautiful and engaging, and I usually like the look of her work. I don’t think that the meaning of all language is unknowable, but the meaning of some language is — and, language is certainly useful, however.

“The conclusions of a certain kind of hairsplitting logic do indeed imply that any linguistic proposition is an illusion when every word in that proposition is uncertain.” – Anyone who knows more than one language knows how poor the languages are.

There was a time when humans used to communicate using telepathy. Even today there are some Himalayan yogis who can use telepathy. German born philosopher Lama Govinda described such an incident about a Tibetan yogi in Himalayas communicating with Govinda’s mother in Germany asking her to write a letter to her son Govinda, who was living at that time in that monastery in Tibet.

Inside our brains we do not have words, pictures, or sound data, we only have bio-chemical signals. Our mind is also not inside our brain. There is nothing called knowledge, experience, intelligence, lies, truths, etc. We are all souls, and our brain is commanded by our soul, moment by moment, according to our destiny. Life is completely defined and precisely predictable by any high level yogi. There are many such examples on the internet spanning over centuries and over all continents. Here is one example.

The famous western palmist, Cheiro, examined the hands of Mark Twain in 1895, when he was bankrupt and $94,000 in debt. Cheiro predicted that he would suddenly become rich in his 68th year (1903). It came true and he signed a contract. Twain wrote – “They guarantee me $25,000 a year for five years, but they will yield twice as much as that for many a year, if intelligently handled.”