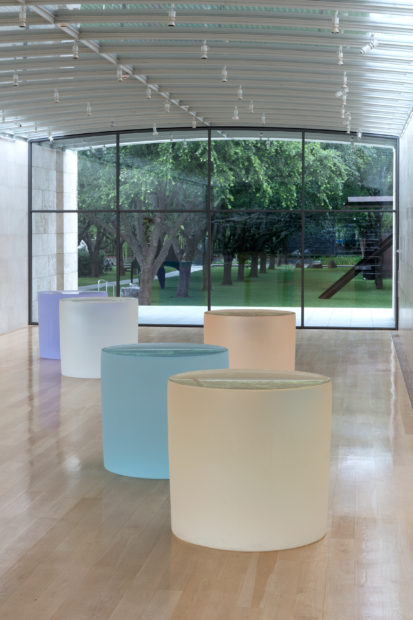 Roni Horn’s exhibition Roni Horn, currently on view at The Nasher Sculpture Center, has a rather misleading title. Less a summation of the artist’s decades-spanning oevre, but cleverly keeping in dialogue with it, the Dallas show features a bigger, bolder iteration of a series of giant glass drums concurrently on display at Fondation Beyeler in Basel, Switzerland, also titled Roni Horn, which I’ve also seen — but I’m getting ahead of myself.

The Nasher show loosely echoes the artist’s Library of Water, begun in 2007, which is a collection of columnal glass pillars housing pure glacier waters on display in Stykkishólmur, Iceland — a country that holds much magic for Horn. Any catologue-ing at the Nasher would be of a much more esoteric classification. Each sculpture block carries a subtitle — windy excerpts selected from the artist’s library of music and literature, which, like letters writ upon water or sand, quickly fade from memory if you don’t know the reference. Roni Horn is a big, fat, devilishly (and literally) opaque cypher, devoid of easy explanation, in keeping with the institution’s recent programming. Selected for the artist’s rare ability to “carry the vocabulary of many mediums with equal aplomb,” according to Nasher director Jeremy Strick, and running through most of August, the Sculpture Center has your summer’s moment of Zen. 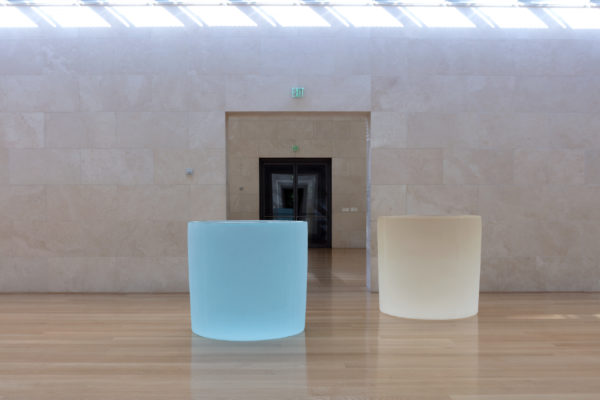 Horn began casting glass in the ’90s. The artist’s work bridges Minimalism and Post-Minimalism concepts of anonymity, process and materiality of the 1960s and ’70s with contemporary practice. Tellingly, though maybe not for all audiences, Is this it? feedback curdles amid the dawning realization of such vast effort needed to amass these means of reflection for the viewer. It is an essential unpack for engaging with this show. Each pastel gumdrop block weighs 10,000 pounds, needs 10 months to chill, and is situated above the offices of the Nasher’s courageous staff. Forged in Pennsylvania, Horn’s translucent forms continue the artist’s long-held preoccupation with reflection, and culminate in a show that playfully fudges the line between objective and subjective art. 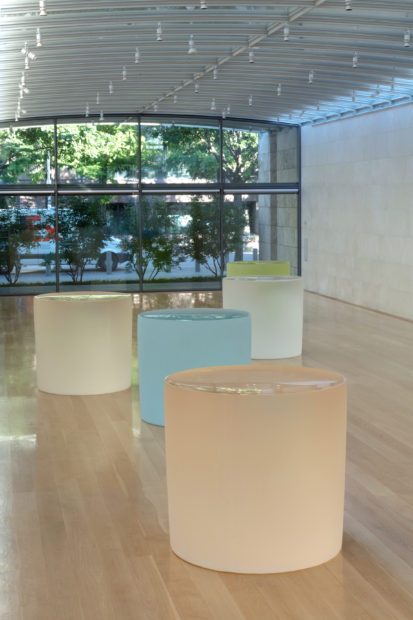 Always attempting to edge in closer, I was tssked by security several times over my series of visits to the Nasher, none of which got to me so much as when I went after dark to the show’s opening. Gazing into the pool-like surfaces of the glass, I shuddered, and wondered if the champagne I had just downed had been laced with something. In low light, I could feel the weight of these works in the ever-evasive shifts of my reflections.

Who decided the best means of reflection after water would be comprised of the sand beside the sea? Let’s look together. Let’s look together. Horn bought Norwegian sand in bulk for blasting into optical glass, the kind used in telescopes that can see across galaxies. Gallery viewing experiences will vary day by day according to the artist’s strictly mandated natural-only lighting, requiring a first-ever removal of the center’s ceiling screens for maximum illumination weather permitting. Every evening when the sun sets, these de-saturated drums shift narrative aims. Reflections shimmer exponentially in low light, and the drums recall fantasy/sci-fi seeing stones or spyglasses. Each dizzying pensieve glimpses someplace else in near kaleidoscopic fashion, maybe even until the sun rises. Night at the Museum 4, anyone? Sadly, but safely, pool access is restricted to daytime use for patrons. Blues, greens, peaches, and lavenders glow in optimal din.

In Horn’s 2011 book Another Water — a text chronicling of the surface flux of the Thames river in London — the artist’s personal insights into these changes are peppered with references to film, literature, and pop-culture (like Bruce Springsteen’s essential album The River). Earlier this summer, the Reading Room’s Karen Weiner organized a communal reading of the book inside the Nasher’s gallery space as an Artist Circle event, with the book’s prose illuminating some invaluable insights for reading  the show:

“In the light, water is water more simply.”

Also from Another Water:

This delicate beauty is right there to observe. Some may only see themselves, but I didn’t. Forgetting its imperialist problems, from Herman Hesse’s Siddhartha:

“He saw his face reflected in the quietly moving water, and there was something in this reflection that reminded him of something he had forgotten and when he reflected on it, he remembered. His face resembled that of another person whom he had once known and loved and even feared.” 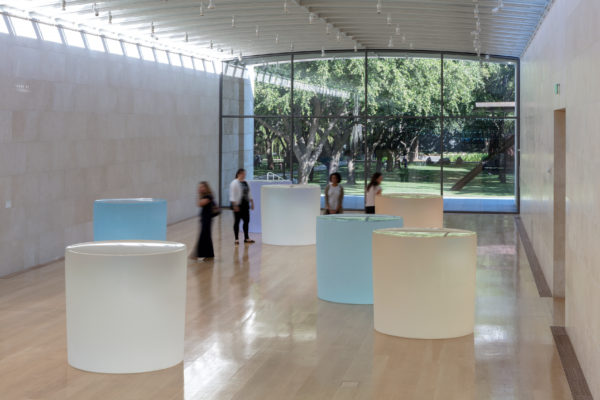 Those who see too little or too much art may hasten past the slow reveals teased in these portals. Really, Roni Horn is not just experiential, but, in a way, instructional. In Dallas, the artist’s drums are taller, more intentionally chest-level than the ones in Basel. In Basel, audiences were able to lean in, hulking over the shorter blocks, which were still naturally lit but dimmer. There, looking down, your reflection is black — an indecipherable sillouette. Why the artist would name a few separate series after herself must go beyond an attempt to summate her process.

Impossible objects don’t have to appreciate as beholden-only. They can forecast future use. Maybe Horn’s orbs will one day inspire molds for relay-based silicon routers, or current-straddling buoys guiding oceanographic recycling. Stare into the abyss and the abyss stares back. You decide. Your reflection is sustained only until your position shifts. Engaging with this search can be as frustrating as it can be relaxing, but the Nasher maintains trust in its audience, offering everything and nothing.

Through Aug. 20 at the Nasher Sculpture Center, Dallas. Images via the Nasher.