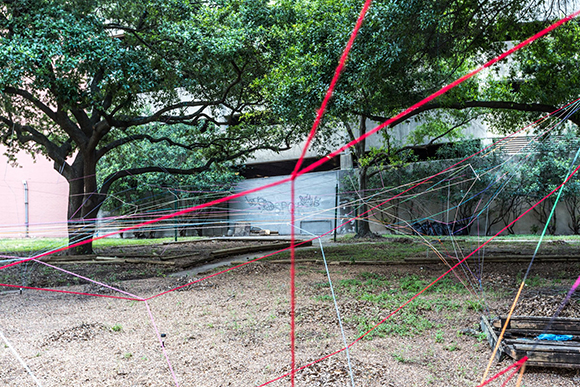 There is a small green space at the intersection of Caroline and Jefferson streets in the center of downtown Houston, near St. Josephs Medical Center and a couple of blocks from the Toyota Center Arena. It’s there that artist Ronald Llewellyn Jones has created a temporary sculpture made of colored yarn that stretches and twists across some large trees and garden posts in the park.

It is a non-commissioned, unsanctioned public work of Jones’s own impulse. In addition to constructing the sculpture, as he worked Jones also cleaned up the park with the help of volunteers and people walking by.

The use of string and twine to create three-dimensional works in the visual arts is well documented. Fred Sandback, Gabriel Dawe, and Annette Lawrence are all artists who have employed the material in their practices. Jones’s contribution will stay put until it is removed by the owner of the property.

An Instagram post on an account listed as Ronald Llewellyn Jones, featuring pictures of the sculpture, reads “Yarn sculptures are my most favorite thing. They give me several hours of freedom of thought. Not having access to space to work out my inner conflicts I search for neglected spaces that I most likely won’t be kicked out of.”

The post continues, “Also, I didn’t ask permission to do this and I understand that it could be gone tomorrow. I’m okay with that because I simply saw an opportunity and acted on it.”

Jones’s sculpture isn’t on the list of public art works that Glasstire featured a few days ago, but a drive-by or a lunchtime stroll to see the sculpture may be worth it. 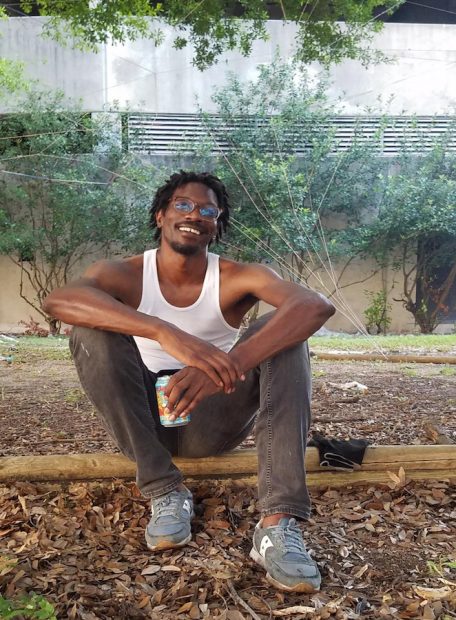 Super proud of you brother!! Great things come to those who wait…

That is amazing! I’m really proud of you!!

Well no one can be more proud of you than I am. I tell you that boy is a GENIUS. I’m dropping the mic and existing the building. Luv Ya MacaRonnie!!!