The Next Frontier: A Visit to Ken Little’s Studio 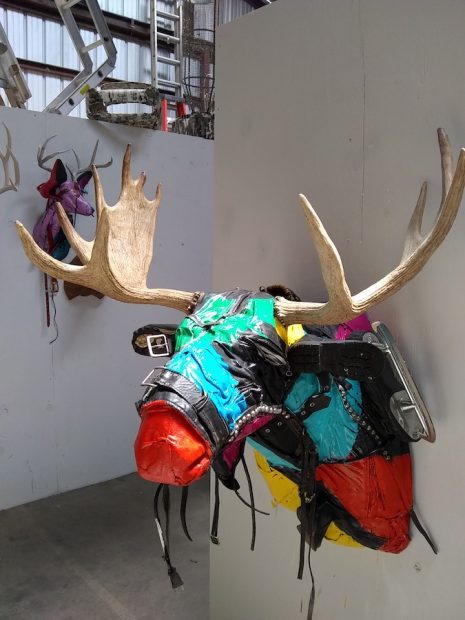 At the studio: One of Ken Little’s sculptures.

San Antonio is a city of icons and symbols: the Alamo, the Missions, the burnished musical legacy in country, Tejano, and the blues. Its art community has its own icons — the house galleries of Presa House and Sala Diaz, known as much for backyard kickbacks and concerts as great art programming — and there is some quintessential ideal of a “San Antonio Artist.” A relaxed folksiness, a self-effacing wry humor at being a creative person in a city often unfairly portrayed as provincial are consistent characteristics across a range of notable San Antonio artists. There are quite a few — Cruz Ortiz and his ecstatic, sun-drenched positivism; Hill Snyder and his low-key renaissance-man mysticism; Katie Pell and her pastiches elevating banal pop culture into chaotic freedom. But it is hard to think of an artist more emblematic of San Antonio’s contemporary art output than Ken Little. 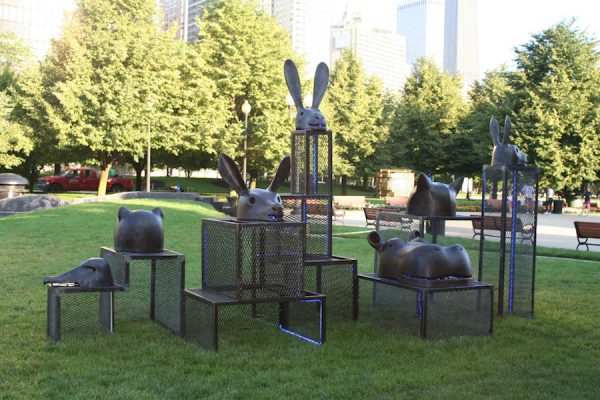 From the artist’s website: “Lookout!” 2011; Cast Iron masks, steel and LED lighting; 8’H x 16’W x 8’D; This is a temporary outdoor installation of the 1988 Kohler Arts Industry castings reconfigured to be atop an abstracted cityscape. Curated by Dave Hickey, this installation was in front of the Navy Pier, in Chicago, Illinois, from July-November 2011

Diminutive in stature, but built like an early 20th-century strongman, Little is a beloved mensch in the San Antonio art community. Little was responsible for essentially building the sculpture program at UTSA and mentoring countless artists along the way, many of whom are now established in this community and beyond. Little also frequently plays live music, often hosting a showcase at Liberty Bar and inviting friends to join his arch, loose sessions which usually include his hilarious “Jesus” song (a series of random proclamations of Jesus’ love: “Jesus loves money and Jesus love toys, toy Jesus!”) 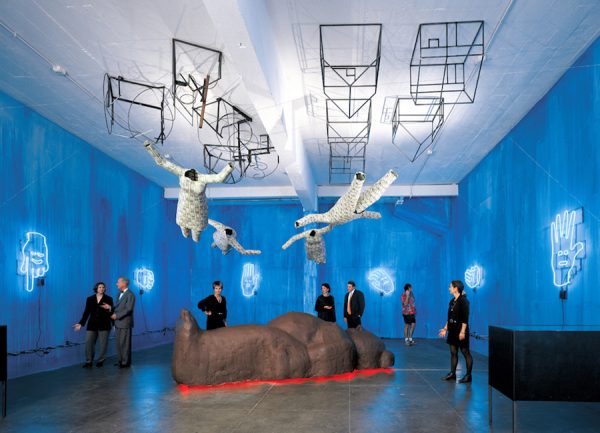 And then there is Little’s art. His intricate “trophies” and animal sculptures are unmistakable. Lacquered with money and bible pages, dragging extension cords (as if they would come alive if they were only plugged in), pinned with toys and detritus, Little’s animals are the animated beasts of our crazed culture.

2019 marks a year of change for Little. The conservative politicians that run Texas, and by extension fund its public universities, are not merely indifferent to art programs, but actively suspicious of them, and over the years UTSA’s sculpture department’s resources have dwindled, leading Little to make the difficult decision to retire. Little and his wife Cathy Cunningham-Little, also an artist, sold their expansive 10,000-plus-square-feet of space in downtown San Antonio and bought a much smaller studio (though still around 5,000 square feet) in pastoral Bulverde. The pair also have a place on the big island in Hawaii where they plan to spend more time, especially during the merciless Texas summer months. 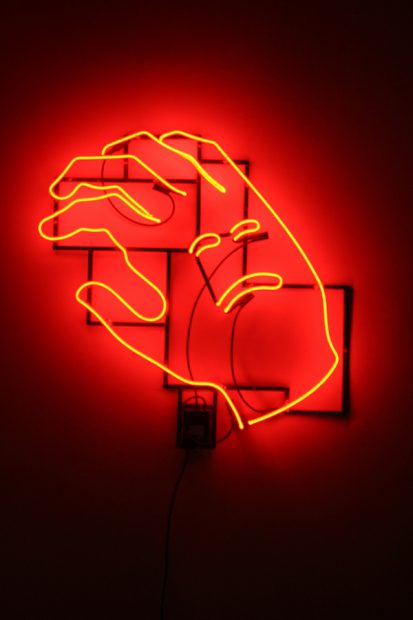 I recently visited their new studio in Bulverde, on a beautiful late spring day. The heavy rains throughout the winter and spring had resulted in explosions of wild flowers, granting the countryside a lush pointillism. The Littles bought the property from a guy that did the sound for touring rock bands and built hot rods as a hobby, which gives the space a “custom garage” ambiance. After a fall from a ladder, Cathy has magnetized boards that allow her to mover her hypnotic colored “light” works, backed on metal like a cosmic switchboard. 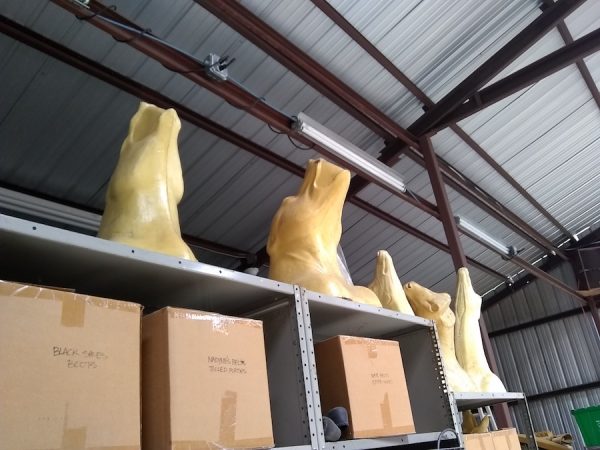 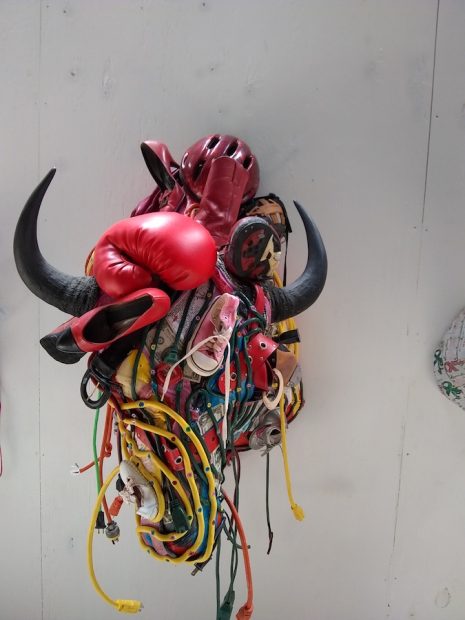 Ken’s side of the studio contains all the supplies necessary to create his trophies and sculptures. The plaster molds of deer heads from taxidermy suppliers are stacked like particularly large and perverse takeout containers. Little explains that much of his creative trajectory is derived from his process. For example, the extension cords that trail off many of his works like umbilical cords and entrails were inspired by a time Little had to use an extension cord to make a work, and he noticed the way it fell of his sculpture onto the floor or canvas. 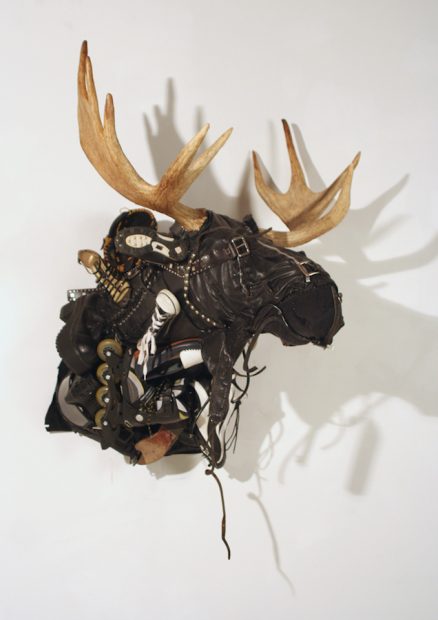 Ken Little, Black Jacket Moose, 2007; Mixed Media, leather, shoes, antlers, etc; 48″H x 44″W x 36″D. From the artist’s website: “These animals are residents of our cityscapes and our psyche. They are ‘big game’ animals, symbols of the natural uncontrollable landscape, the frontier. They are the true sublime, our subconscious, the dreamscape, the other. They are essential. They are dangerous. They are hilarious. They are gruesome. They are cute. They are trash. They are art.” 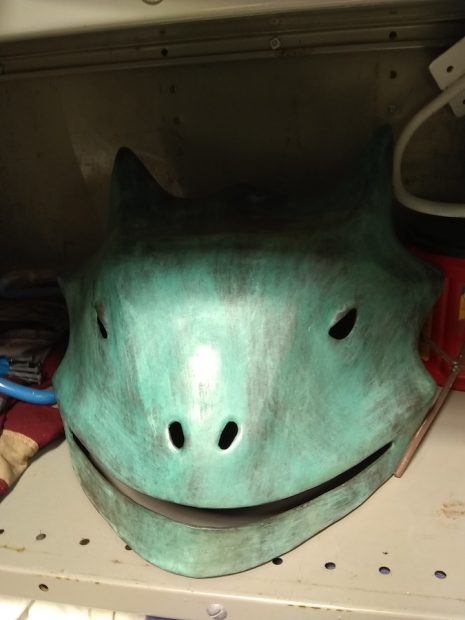 Little does not have any specific project or ambitions post-retirement. Hopefully what this new phase of his life and career brings is a bounty of “freedom of process.” I was stunned by a series of works I wasn’t familiar with in the Little oeuvre — bronze mask sculptures of animals burnished with a perfect light-emerald patina. They carry an ancient elementalism; you can imagine them slipped into a museum of antiquities and escaping notice. But they also radiate the trickster energy found throughout Little’s work. His pieces are beings that might curse or bless or fool you. You can gaze at his horned-toad mask and imagine following it, or whoever was wearing it, deep into the jungle. May Little meet more of these beings in this next frontier.

Ken Little is bigger than life and his talent will always shine. I only wish we could get together more often and play some music.
Such a great talent!

GREAT Article!!! Thank you for acknowledging one of SA’s unique, iconic artist and teachers! So thankful to know him and be I spired by his work.

Love reading about Ken, he deserves A LOT more attention, one of my favorite artists!

Have always worshipped from afar!! I hope the brilliant morphing into more and more brilliance goes on and on.
CONGRATULATIONS!!
Don’t sit down.

Ken Little is easily one of the most prolific and important artists to “emerge” in the last 50 years or more. He is also a damn good songwriter/musician/lyricist. And beyond all else… the best big brother anyone could ever ask for !! I Love You brother Ken Mark Little

My talented brother in law. We have a few of his art pieces in our home. Love his work. Great imagination to confound the wise. You deserve all the accalades you have received.

Ken is well loved in Montana, too. From his days teaching with Rudy Autio at the University of Montana and the origins of his brilliant taxidermy art in the milieu that also inspired Deborah Butterfield, John Buck and Theodore Waddell, Ken remains a key part of the Northern Rockies avant-garde. As a young curator, I met him at the Yellowstone Art Center when we featured a traveling exhibition of his early, boot-belt-and-shoe encrusted animal art. Two major works from that era remain in the collection of the Yellowstone Art Museum, and when I asked him to send a 90th birthday greeting to Donna Forbes, the museum’s director from that era, he responded with a beautiful original drawing on dollar bills. A token of a generous man, and an extremely loyal friend. Congratulations, Ken!

I am so excited to see this write up on 1 of my favorite artists & friends.